Last Saturday, we had our last work day of the year. Ed Rogers, a camp counselor, brought 5 guys from the work share program he volunteers with. They worked in the Trapline lodge (men's) putting up drywall on the cathedral part of the ceiling in a dorm room. Also here for the work day, was a group from Shepard's College. It's a Christian non-profit that provides residency for people with disabilities, and more recently, they started a post secondary education system for people with disabilities. The students can choose from horticulture and culinary arts. Erin Reynolds, who has been a counselor at camp many times, works at the college organized their coming up for the work day. The college is in Union Grove, WI. They drove up Friday night and stayed in the dorms. The Shepard's group consisted of 9 students and 3 staff. They broke up into three groups and each group worked with a member of the Camp Daniel staff. Below is a picture of the group. They were a lot of fun and we're hoping that they come back again.....only in better weather. Saturday was all about cold, rainy and windy. A lovely combo. But they were troopers, and none complained as much as I! In the end, we got a lot done. 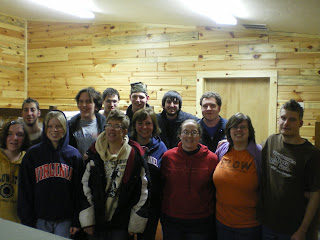 I just mentioned the wet weather, which never touched any of this crew! (Yea, I'm a little resentful. And I think they were just showing off in those short sleeve shirts! ) These guys hung drywall with Dave Detloff. 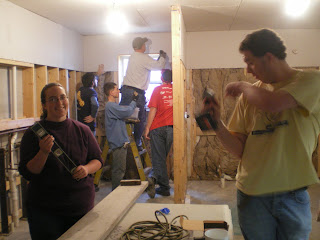 These guys kicked butt. They moved 5 pallets of retaining block. Each block probably weighs 15 lbs.! Do the math. They loaded them onto the trailer, where they were then added to the retaining wall between the Founders House (Jo and Sr) and the Lumberjack Lodge (women's dorm). When they finished moving the block, this group back filled the retaining wall with sand. 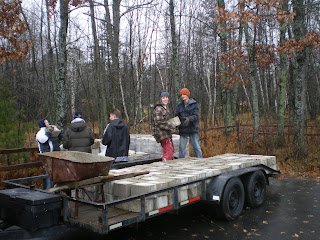 This was the group that I worked with. (yes, we were outside the entire day. :( First we mulched the trees that hadn't been mulched during previous work days. Then we moved about two yards of pea gravel. In the pic below, they are unloading the gravel to a location where we can store it until we need it next spring. The pile was left over from the retaining wall that's between the Founders House and the Lumberjack Lodge. 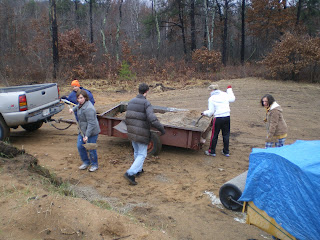 This is where the first group I mentioned was moving sand to back fill the retaining wall. 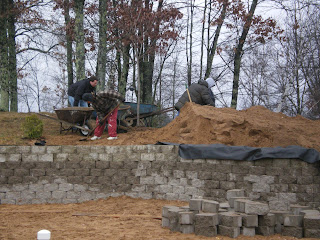 The kids were having a grand time with "Ooblec", which is a science experiment that Annissa learned in science. It's two parts cornstarch and one part water. When mixed it has this strange ability to change back and forth between a solid and a liquid. If any pressure is applied it gets instantly solid, like a thick clay, but as soon as the pressure is released, it's instantly a drippy liquid. Very cool (and a bit messy, as I'm still finding it in nooks and cranny's. Although maybe I shouldn't blame it on the ooblec, rather the ones making it!) 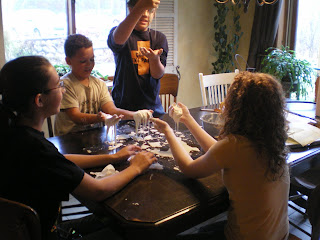 This week, Tony and the guys have been working by the retaining wall that's between the Founders House and the Lumberjack lodge. Even after the work day, there was still much that needed to be filled. Then they started on the new path that will lead from the dorm down to the lake area. If you're familiar with camp, it's where the stairs are that now lead up to the Founder House. Tony is great at seeing how things could be with elevation changes. None of the rest of us would have been able to make this all make sense and work in a great way to control the flow of run off water, which is always a big concern. In the pic below, you can see where they made a path area that will lead to the stairs. It has retaining wall on the left. Eventually, the area on the right will be even (where there's a hump now) and that area will be blocked in as well, as the pitch there is pretty steep. 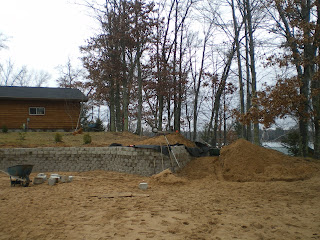 This is a closer shot. 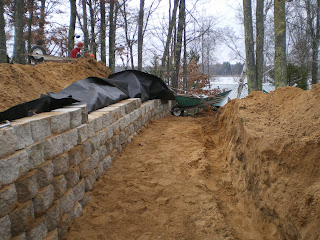 This is from the bottom looking up the stairs. I just took this picture today, but it's already out of date as the retaining wall already goes across the stairs. This isn't all going to make sense, so you'll just have to figure it out with the future pictures. 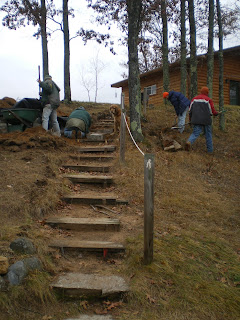 Molly and I have both been in the Christmas mood. We both took advantage of the warm weather last week and hung up outside Christmas lights. Molly finished hers this week. Plus she's been working a bunch on the camper's Christmas cards. It takes time (and some racking of the memory) to figure out exactly which picture goes in each camper's card. Camp Daniel has been sending Christmas cards with a picture of each camper for years. Of course, every year the list gets longer and our memories are having a hard time keeping up!
I started putting up decorations in our house, which makes the kids very happy. I'm thinking that a fun December blog will have to be all pics of the staff houses Christmas decorations/trees.
The question was asked after the last blog about what the white rectangles are on the gable ends of the dorms. Good question, and maybe there's others wondering the same thing, so I thought I'd blog the answer. The white that you see is Tyvec house wrap. Those areas don't have any siding, but have a 2x4 frame around them. Each dorm has 4, one on each elevation. They will have a sign in them indicating which building each is. So the signs will say either "Lumberjack Lodge" or "Trapline Lodge". They each have lighting over them. I will be painting those this winter, and I'll be sure to blog them after they get hung. By each dorm room door is a place for a much smaller sign that will indicate the name of that room; Red Oak Cabin, White Birch Cabin, Bobcat Cabin, etc. Many of the Camp Daniel staff, after all these years, still don't know the names of the cabins at Lake Helen. So this will avoid that scenario when we have camp on our own grounds!