Another great summer camp season has come and gone! Each week we had about 50 campers, so we were able to serve roughly 200 children and adults with disabilities over the whole summer! In order to serve the campers, we had 80-100 volunteers each week, totaling roughly 400 volunteers for the summer.

In the following, we'd like to take you on a little journey recapping the summer and highlighting some of the new things on camp. 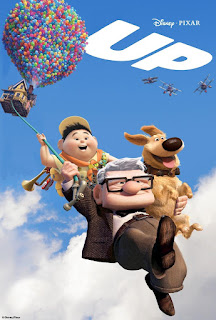 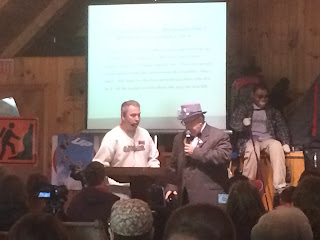 This year's camp theme was JOURNEY. We learned how to "Journey God's way" together as a community. One of our volunteers pointed out that in the word "Journey" is the word "Our" and we learned to journey this life together, not alone.

Every year, we pick out a movie for our outdoor movie night that goes with the camp theme. This year's movie was Disney's UP, which follows a life's journey of a young boy and an elderly man.

This theme was carried over into The Able Hour (the morning chapel) with Pastor Tim. Pastor Tim used Pastor John as a character from the movie UP, and we followed his journey with God throughout the week. 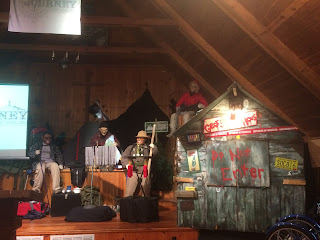 The Chapel was decorated with a mountaineering theme, rock climbers on a journey up a mountain. 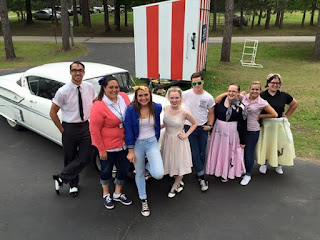 This was our second year implementing the Intern Program. This year we had 8 interns for an 8 week commitment. They came a week before camp started to prepare, 2 weeks of camp, helped serve during the week off of camp, 2 more weeks of camp, and then helped the week after camp putting everything away for storage in the off season. Their 8th week, they went to help serve a a sister camp in MN. 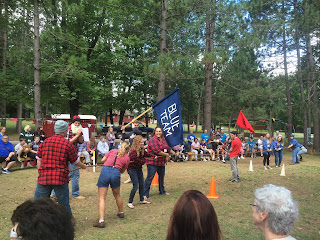 The interns played a big part of what went on during summer camp. They were in charge of Rec Games, they were cabin leaders, some were counselors various weeks, and help with many behind the scenes responsibilities. 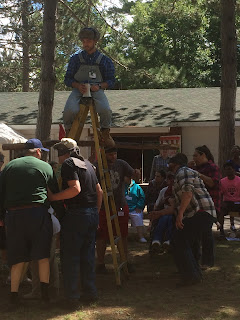 Here Lumberjack Evan is officiating the sausage eating contest. The campers had to lead their counselors blindfolded to the hanging sausage link for them to eat. 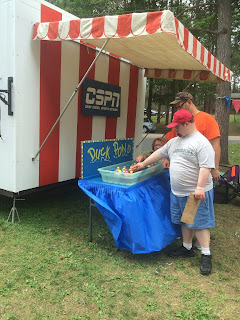 The Carnival Trailer has been a great and needed addition! It was an old pop-up camper that was stripped down to its base frame and the trailer you see here was built. Not only is the trailer great for storage of carnival and the rec games, it adds to the carnival feel we strive hard to make. 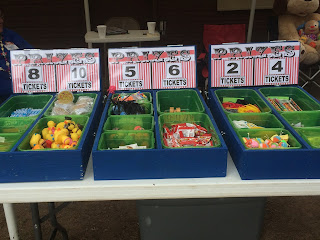 Karol made some beautiful display boxes for the carnival prizes, adding to that authentic carnival atmosphere! 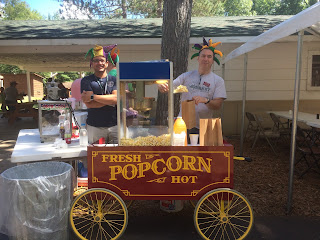 And what more can add to the feel of a carnival than this concession cart for popcorn! 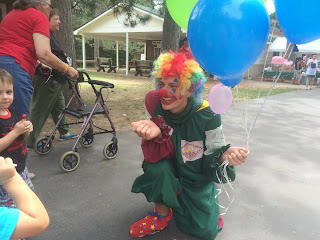 And.... what is a carnival without balloons and a clown? 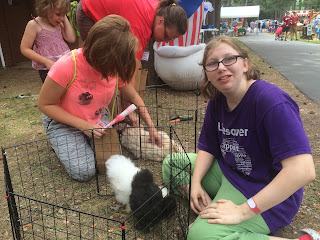 Also new this year was some soft, fluffy animals to pet. One of our volunteers brought an angora rabbit and silkie chickens.

Another exciting highlight of the summer was when Fox 11 News came to run a story on Al Zielinski and his faithful service to us for over 10 years. Al would bring his 1958 Chevy to camp on our 50's night. Al would take the winners of the twist contest for a ride in his car to the local ice cream shop. Here's the news clip. http://fox11online.com/news/local/northwoods/crivitz-man-remembered-for-special-car-rides-at-summer-camp 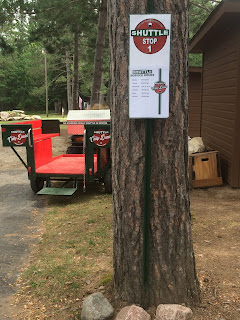 Hands down, the new shuttle and shuttle service has been one of the best additions to this summer!
With a spread out campus and gravel paths in some areas, it can be hard for campers to get from one place to another. The shuttle also came in very handy for hauling luggage when campers arrived and packed up.

Here is one of the shuttle stops, with the shuttle, hand made by Camp Daniel, in the background. The shuttle held 4-6 people. 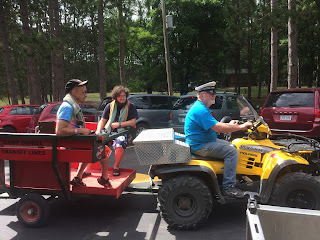 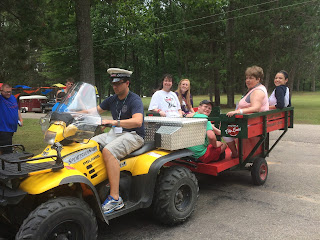 
Besides our counselors, there were many volunteers working behind the scenes with cleaning the bathrooms and dining hall, doing dishes, setting up activities, working in the kitchen and running activities during free time. These work groups came from church youth groups, as well as, other church groups and organizations.

Thank you to all our volunteers that helped make this year's Journey possible!
at 12:46 PM