Yes, the Camp Daniel missionaries are still working! Sorry for the long absence. Tony has continued to work on Megarusalem, doing detail work. The Megarusalem program has been going for about 4 weeks. It's been very successful. The kids love it.
Below is the money changer. The sign above is a spin off of the Wells Fargo logo. "We'll Go Far". The horse and carriage were replaced with camels and a chariot. 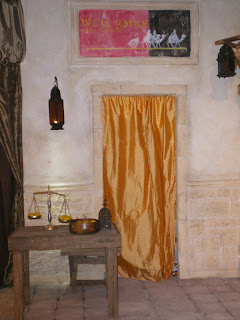 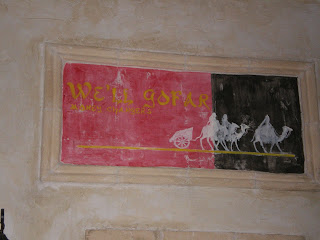 Tim and the guys have been working on Jen and Molly's cabin. 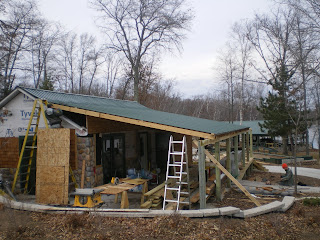 Included in this project, was the stairwell leading to the basement that's under the bathrooms. The black doorway that you see is at the opposite end of the stairwell, and leads to a storage closet that goes over the top of part of the stairwell. 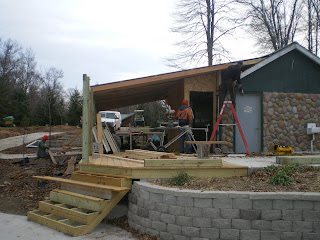 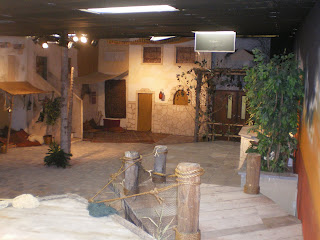 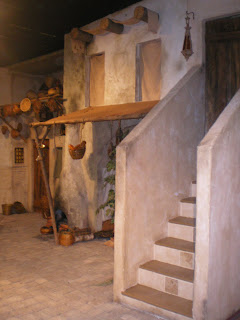 As you can see in the pic below, some of the building fronts have signs painted on the facade. This is the Megarsalem Pottery and Basket 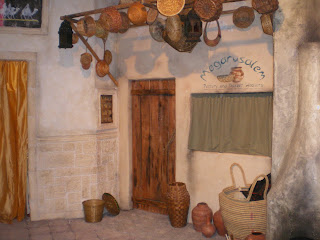 It's awesome how great this boat turned out. You really need to see it live and in person. 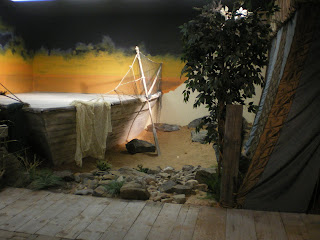 John and Jen have been working on organizational changes for the Able Church.
John and Sue and the Mandich's (Tim and Janice, from Living Hope Church) went to downtown Green Bay to serve a Thanksgiving meal to some homeless and struggling people. They were encouraged by the experience and are looking into having members of the Able Church do this once a month as an outreach. Marceaux's parents, Ben and Ginny, flew in from Montana for Thanksgiving. We were happy to have them, Jen's mom and Molly's parents, all for Thanksgiving dinner.
Tony and the guys have also been spending a lot of time planting the many many trees donated by Green Bay Nursery. I've lost track of how many loads of trees Tony's brought up from Green Bay. We've been blessed with a mild fall that has allowed for outside work much longer than usual.
Chrissy has been busy with Camp Daniel newsletters. The Christmas edition is at the printers now.