Sorry, going back a few weeks here. On Saturday, November 21, Green Bay had their annual holiday parade, and the Mega Micro Bus had it's debut at this parade. Many kids and adults from Camp Daniel and Living Hope Church came out to support our entry. Unfortunately the bus had a few mechanical issues, so Tony ended up pulling it with Karol's dad's ATV. The large Santa hat turned out well, and with everyone in bright orange, our entry was a sight to behold. This parade was a bigger deal than the Memorial Day one we did in that it was televised in Green Bay. All went well, and we're looking forward to participating again next year. 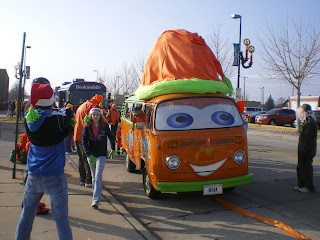 The bus is currently sitting in front of the church with the hat still on. We're hoping that people will remember it from the parade and stop in to check out Mega. 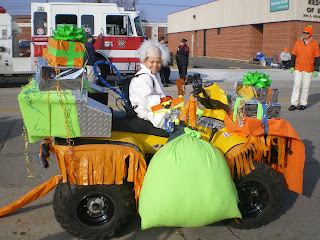 Mega and Megarusalem have been doing great. Lots and lots of new kids come every week!
Back in Athelstane, we are glad to report that the last of the donated trees are planted, watered, and mulched. Usually the guys dread winter because of all the shoveling, but this year, I believe that they're looking forward to snow, so as to stop planting and watering!
Tim buttoned up the craft cabin before he left on Wednesday for Africa. He'll be on this scouting trip for just over two weeks. Tony built a blog for his trip. I have a link for it on this blog. It's lhcmissions.blogspot.com We at Camp Daniel are all pitching in to help Chrissy in whatever she may need during this time.
Marceaux's parents finished their trip here on Tuesday. They had a good time getting to know Jen and her family. They did a lot of sight seeing around the area.
Jen's now back to work filling in for an injured occupational therapist in Coleman. And Marceaux has been working on the work van and Karol and Tony's van. While his dad was still here, he and Marceaux put in a few days working on the Mega Bus, and got it up and running.
John has been working with Tim Mandich, getting him more involved in Able. The new church restructuring gave Tim many different areas of supervision. We're all very excited to have the Mandich's help and guidance.
Tony took his last trip to Green Bay to the nursery. This time for a load of blue stone. They're large flat rocks that will be installed around the new fire pit. Plus, there should be enough to make a sidewalk to the fire pit as well.
Tony and Karol are in the middle of redoing the signs for the gift shop. It's now primarily a Christmas shop, so the name and logo needed to be reworked.
Karol and the guys put up some of their Christmas decorations upstairs. The tree and nativity set (the two big projects) will follow. I'll be sure to give you some pics.