Well, our area has received, or shall I say, "is receiving", the first snow storm of the year. The kids are all very excited. It's been a blustery affair that has turned our campus into a winter wonderland. The guys actually didn't mind the snow because that means that they're officially done with planting trees and raking leaves. 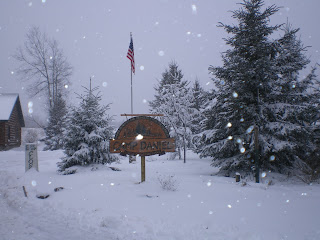 Tony and the guys spent the better part of yesterday preparing for the impeding blanket of white. They fixed up all of the shovels. Some needed new handles, and most needed grinding of the ends to level them out, so as to not shovel two skinny stripes. They put new sideview mirrors and the plow on the blue truck. Marceaux got the snow blowers up and running. Tony showed the guys how to use the snow blower.

Yesterday morning we had our weekly Camp Daniel missionary meeting. We were pleased to have Tim Mandich with us again this week. He's getting a better idea of how things work around here, and getting to know us all better thru these meetings. We concluded with the 4th part of a bible study called 40 Days of Love.

Molly has been working hard on her support letter. She's hoping to get it out soon so that she can get closer to her monthly support goal of $1,500 per month.

As I said, Marceaux was working on the snow blowers yesterday. Prior to that, he fixed the brakes on Karol and Tony's van, fixed something on the white work van and fixed multiple things on Jen's car.

Last Saturday, Jen, Marceaux, John, Tina Russell, and the guys went to Waukesha for the State level Special Olympics bowling. Richard and Nick placed 6th, and Tina placed 7th. The competition must have been really stiff, because the Able bowlers all had great games. We're very proud of them this season!

Jen is still filling in for an injured therapist, and working on Able.

Karol printed labels for the upcoming Camp Daniel newsletter. The program we're using is inadequate. We're excited for the customized Access program that Ken Bork is setting up for us. It will combine all of our databases into one that everyone here can use.
Tony's been trying to print the insert for the newsletter. It's a two sided picture page that doubles as a Christmas card. Unfortunately, his printer is not very happy about this large job, and it won't print more than a page every couple minutes! Frustrations galore!!
Tony's been plowing all day. Not necessarily because of the quantity of snow, but because he gets motion sickness badly, while doing it. Tim, where are you? Oh yea, he's in Africa, where it's 80 degrees. Please see the blog following this current trip to Kenya. There's a link on the left column of this page. Titled LHC Missions.

Earlier this week, Tony worked on the gravel roads on the property, putting up reflectors and grading. He also bulldozed some areas under construction.
at 10:32 AM