Well, over the past week, Tim has been plastering like a madman. He, the guys and Marceaux plastered both dorm rooms. In the below pic, you can see the detailing of the ceilings. Both rooms have two coats of plaster. Then, during the work day last Saturday, the one room was primed and painted, while Tim finished the plaster on the second room. 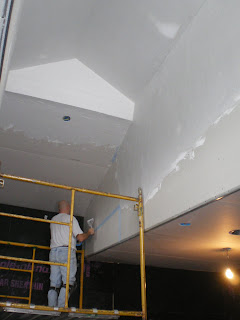 During the work day last Saturday, Jen, Molly and Crystal pitched in to get one bathroom sheet rocked. In the below pic, you see Tim plastering the ceiling and upper walls. (We'll be tiling the lower two thirds of the walls) 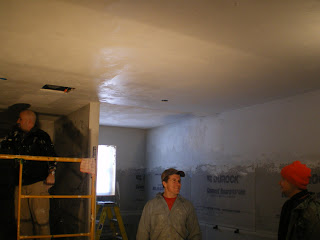 Tuesday, Rick Bub brought 4 guys from Cornerstone church in Athelstane out to start the tongue and groove on the walls. They are doing a beautiful job, and will be coming back next week to continue this large job. 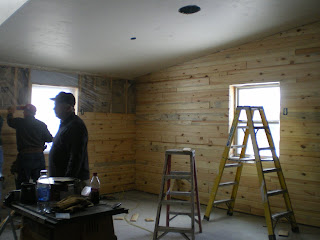 Karol's still plugging away at Annissa's room. The closet doors are now done, so that completes the painting, and now it's on to other projects in the room. 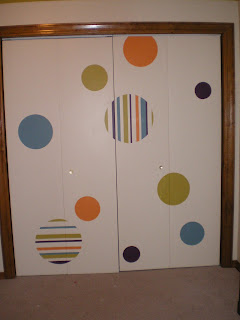 Last Friday, The Able Church had a spaghetti dinner before the service that was attended by over 100 people. Guest speaker from camp, Larry Campbell, preached.
Molly's still going to the Weidner's every week. I think they're falling into the groove now. Be sure to check out Molly's blog. (Revolutionary Love)
Chrissy's sent out emails to announce the work days. If you didn't get one, and would like to be on the list, just email info@campdaniel.org. We need all the help we can get!
On Tuesdays we continue with our weekly "Family Meeting" or Camp Daniel staff meeting. It is an opportunity to go over the weeks events, plan the coming days, weeks and months, share our triumphs and burdens, and grow in our prayer and devotional time.
After the family meetings Tony, John, Jen, Tim Mandich, Molly and Marceaux have a second meeting for the Able Church. They have been picking sermon themes and discussing how best to present them to our group with mental disabilities. The time is entertaining and educational as it becomes loud and discussion ensues on theology and presentation. The group has also been working towards translating the book of John into an understandable form for the culture of mental disability. Tony and John met with Wycliff in Flordia 2 years ago about the need and getting help with this project, so this is the begging stage of that.
Tony and Tim have bee working at LHC installing some new equipment and redoing the entire sound system for MEGA and the Able Church. Tim and Chrissy have been putting in allot of ours of preparation the Kenya Missions trip. Just getting 25 plane tickets has ben alot of work! Tony and Tim Mandich will be with them on the trip, so they have been meeting regularly for that as well as starting their first round of many shots and getting their passports in order.
LT, Karol and Sr. Have been working on camper and counselor applications this week. they will be back from the printer Friday and then will b folded and labeled for mailing next week. Also Tony has been working on the Camp Logo's and speaker packets while karol has worked on the schedule and details of camp. Chrissy has begun this week,writing to kitchen volunteers and planning the menu.
The Able Church Attack BB team has played its first tournament, they scrimmage at Aspiro next week in preparation for the regional tournament coming up. Jen, Marceaux, Jon and Molly are all working with Coach Roger Wied to bring it all together.
Tony and Karol have also been working on the plans for Camp Daniel's dinning hall, it is a big job to include everything needed yet keep the building affordable but interesting.
Jen, Marceaux and the guys are in charge of our recycling program, one of the many jobs to keep our small community going. Papa Tony and Jo oversee the office which is the central point for everyone at Camp Daniel. Making sure there is propane in the tanks, the septics are scheduled for cleaning, the phone and electric bills get paid, and insurance is up to date for the 10 buildings on the campus is a big job. Sr and Jo also oversee the CD Gift Shop which they recently relaunched with a Christmas and north woods theme. It is now called the North Pole Gift Shop. We invite you to come out and shop... all proceeds help Camp Daniel operations.