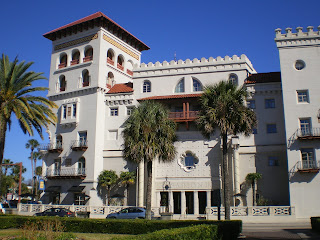 There seems to be alot going on at Camp Daniel for the middle of winter! We like to think that things slow down during the first few months of the year, and often people ask what we do during this time of year (my reply to that is now, "do you read our blog?"), but we're staying plenty busy.
So, Tony and Karol were in Florida. The first leg of the trip, as I mentioned in the previous blog, was work, but the second half was more about fun, (although there was still much ministry discussed, and some architectural inspirations revealed) The above picture was taken in St. Augustine, which is the oldest city in the US. Talk about architecture! It's an amazing city.
But, back to the snowy grayness that is Wisconsin...
Last Thursday afternoon, a group of 18, from Silver Birch Ranch, came for a work day. They worked Thursday afternoon and Friday morning. They accomplished much. The first pic is representative of all of the materials that they moved from one location to another. All of the tongue and groove that will be on the walls was moved from the women's dorm to the men's. They also moved about 150 cases of paper products from the garage to the dorm where they will soon be stored in the attic space that is above the bathrooms. 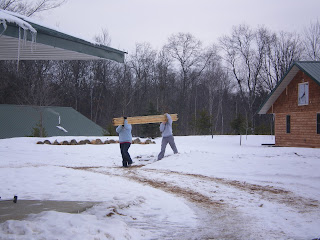 We are currently working on the women's dorm only, so as to finish it by this summer. We really need it done so that the youth group, of about 30, can stay in it this summer when they volunteer a week of labor.
In the below pic, you can see some of the work that Tim and the guys did in the past two weeks. With the help of Marceaux, they blew insulation into both dorms, the craft cabin, and John and Sue's place. It was a big messy job. Where's Mike Rowe when you need him?
So, with the insulation done, the ceilings were ready to be drywalled. Most of the drywall had been done in recent weeks, but now they could be sealed off all the way. 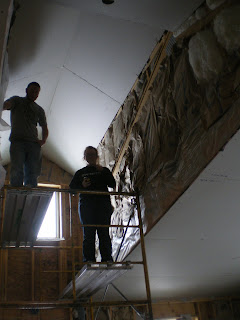 The Silver Birch group had some fun with insulation. We had walls that needed fiberglass insulation put in. Then they put the "buffalo board" on the walls. It's the black stuff you see in some of the pics. It's a noise barrier. The tongue and groove will be installed over it. 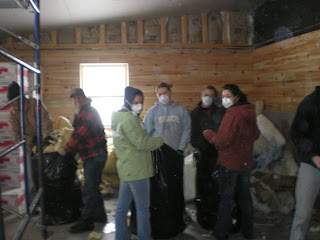 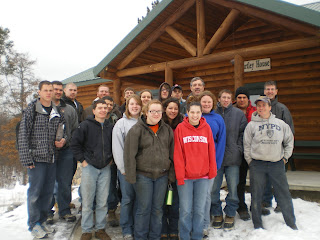 Hey, we have heat! The working conditions are so much better now in the dorms.
Tim is setting up a work shop in one section so that he can do some woodworking projects that need to be done. 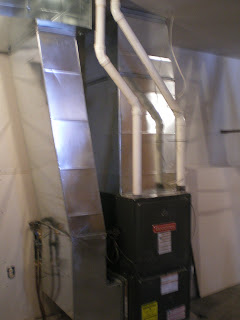 As usual, the Able Church has lots going on... Last Friday, they had a girls sleepover at Living Hope. Sixteen girls were there to watch "One Night with the King", which coordinated with the Bible study they just finished on Esther. The Able basketball team had their first tournament on Saturday, and are looking forward to the next, which will be next month. Jen, Marceaux, John and Sue continue to visit many of our campers at home, and at work shops.
We're so appreciative to have so many different things happening at once. Building the grounds, and building relationships are so important to what we do. The missionaries at Camp Daniel are doing a great job at both!