Here's what's been happening since our last blog:
Dave Detloff (from Living Hope Church) has been up 3 times to work on trim and tongue and groove in the dorms. He has the trim in one room done and two walls done (with tongue and groove) in another. We really appreciate all the hard work he has put in!

Last week, Tony and Jen spent a lot of time preparing for our trip to a Joni and Friends disability summit in Palos Heights, IL. They taught a class on The Able Church. They both spoke on the philosophy and practical matters of the church. Tony and Jen took video footage at Able and made a 7 minute video showing how Able uses people with disabilities to lead the church. It was pretty powerful and many people got alot out of the class. Some people that work with people with disabilities don't see the leadership potential of people with disabilities, so I'm sure that it was an eye opener for many. Especially when they saw on of our campers, Jesse Towne, preaching. It was awesome!
Regarding the trip, Tony, Karol, Tim, Chrissy, Jen, Marceaux, Molly and Tim Mandich all loaded into the bus after Able last Friday and drove to IL for the conference. We all went to different break out sessions and each gleaned some valuable information from the conference. We got home pretty late on Saturday, but it was well worth the trip. 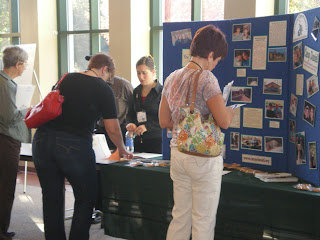 Tony's been spending a lot of time on the bulldozer this past week. The two proceeding pics show some of his handiwork, but like I said before, it's really hard to appreciate all of the earth moving. The area behind the dorm in the first pic below shows the finished grade for that area. The top soil spreading, started during the youth weekend, was finished and seed was planted in the area. Richard's been watering every other day since. 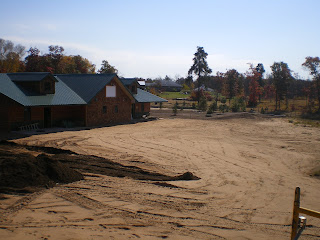 Tim spent a good day filling the dump truck with top soil, driving it to the area between the two dorms, dumping, driving back to the dirt pile, transferring from the dump truck to the excavator (which, although sold, is thankfully still here) and using it to fill the dump truck again. I won't even hazard a guess as to how many times this process took place, all to get the top soil to where Tony could use it to sculpt the earth. After Tony was done with the dozer, then he used an ATV to drag a metal bed frame to smooth out the dirt and bring up the large pieces of rock and debris. The second order of seed was delivered today, so pretty soon this area will be seeded and rolled. Lucky Richard, in having another couple thousand square feet to keep watered! 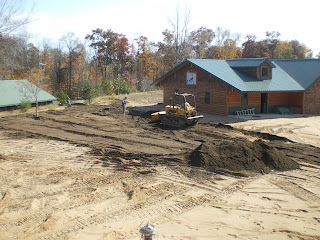 Jen, Molly and Karol have been taking advantage of the warm weather by cleaning up the flower beds on the grounds. Jen also finished staining the Hartley House deck. There were some parts that they didn't get to on the youth weekend.
Tim and the guys have been working in the Trapline Lodge dorm. They've been insulating the ceilings and getting them ready for drywall. Also, there was a bunch of stuff stored in there, that was moved to the storage unit down the road.
The guys from Ideal Air were here yesterday and today installing the furnaces for the Trapline Lodge.
Chrissy got the newslette off to the printer. She'll be picking it up tomorrow and hopefully addresses will be done by Friday so it can be in your mailbox by Monday. If you don't receive our newsletter, and would like to, please email us at info@campdaniel.org and we'll get you on the list.