Around noon last Thursday, the group of 31 from Silverbirch Ranch came to Camp Daniel for work days. This year, Silverbirch has 30 students in their 1 year program. They brought their students at this same time last year, as well. They worked the half day on Thursday, stayed overnight in the dorms, then worked til noon on Friday. It was very cold, so most all of the jobs were inside. Below you can see three of the group that primed and painted the ceiling and upper walls of the two dorm bathrooms. 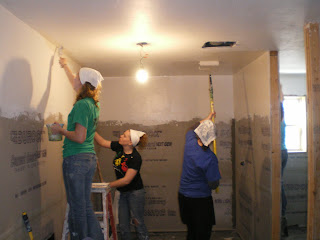 This crew worked on drywalling the large dormer part of the ceiling in the dorm of the Trapline Lodge. 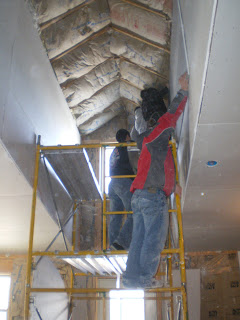 A few months ago, Tony and Karol put together information and ideas that they've gathered over the past 15 years, about bunk beds. It was finally time to come up with a do-it-yourself design for the dorm bunk beds. Plans were painstakingly drawn up, then Tim built a prototype. We've been very fortunate to have great people step up to help with different aspects of construction. Again, we had a volunteer to build the bunkbeds; a couple at a time. So the plans were passed along, and a few months later, we have three bunkbeds! The Silverbirch crew sanded, conditioned and stained the beds. They look great! 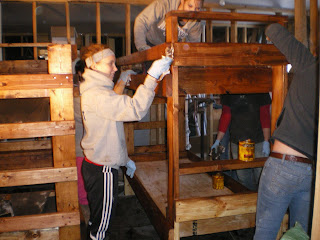 This crew was learning how to put up tongue and groove in the Trapline Lodge. Many of the volunteers learned new skills while at Camp Daniel, and we were very appreciative of the help! I believe that's called "win, win". 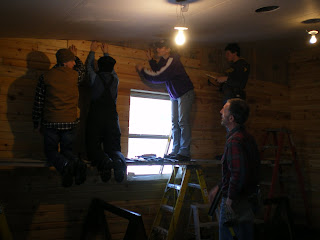