Tim and the guys have been working in the Lumberjack Lodge dorm. In the pic below, you can see that supports for the poured concrete counter. 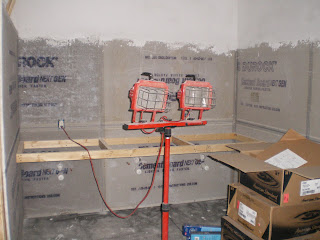 This smaller counter is also in the bathrooms. It will have a mirror above it. It's basically a primping area. These counters were poured in place, which is the same way that they did the first two baths. 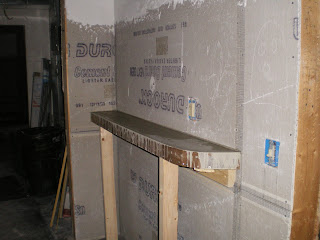 For the large counter, (which will have 3 sinks), Tim decided to do it differently than he did the first two baths. Instead of pouring the counter in place, they poured the concrete counter upside down. When dry, it will be flipped and put in place. The benefit is that the top (which was the bottom when the concrete was poured) will be very very smooth. The downside is that this counter is extremely heavy, and the fit had to worked out quite precisely before it was poured. 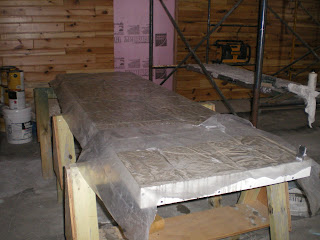 Tim and the guys also insulated one of the attics above Molly's place. Dave Detloff has spent a few days here recently, working on tongue and groove in the Trapline Lodge dorm. This week, much time will be spent preparing for a large work day on Friday. We have 30 people coming from Silver Birch Ranch. We're excited at the work that'll get done. That's a lot of jobs to find and get organized for!
Tony spoke at Living Hope yesterday for Missions Sunday. He spent much of last week preparing for the service. It went great. There was a lot of fun Steelers/Packers banter throughout the entire service. All of the CD staff was at the Super Bowl party that Living Hope puts on as an outreach to the community. There were many new people there, and many people that attend Able Church.
Tony was super excited last week when he got a professional video camera in the mail. It was donated by a church in Ohio over a year ago; but we just received it, as we had to wait for the church to raise the money to buy a new camera. The main plan for the camera is to shoot a Jesus Film specifically for people with disabilities.
Jen and Marceaux have been very busy with the Able Church Special Olympics basketball team - The Able Attack. They won both of their games last Saturday. Recently, the Bury's sent out a missionary newsletter to their friends and supporters. Marceaux has also been doing handy work with the snowblower, fan on the bus, and the large bullet heater. He's also been doing Bible studies with the guys.