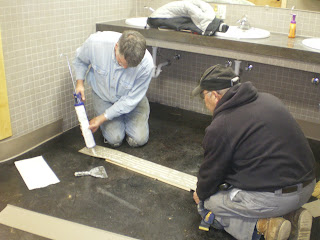 Shame on me for not having blogged recently. Time got away from me, that's for sure. When I sit down to blog I look back at the last entry to see where I left off. Well, this may be a long one today! I'm not going to go in chronological order, so we'll start with the pictures. We had a work day last Saturday. A group came up from a church in the Sheboygan area. They are a great group, who's been here for work days before. They always get so much done, and we sure don't mind that they bring along lunch as well as willing and trained workers! In the pic above, these guys are putting up vinyl base molding in the finished bathrooms (well, now they're finished). We decided to get the larger 6" molding to protect the walls from all of the future mopping that'll be going on in these bathrooms. 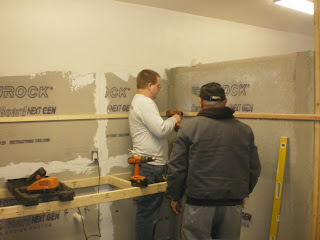 These guys are putting up a guide for the tile border that will be in the remaining two baths of the Lumberjack Lodge. We now have a deadline of mid-April to get this dorm 100% done. That means lots of tiling, trim work and floor finishing will be going on over the next few weeks. It'll be fun. 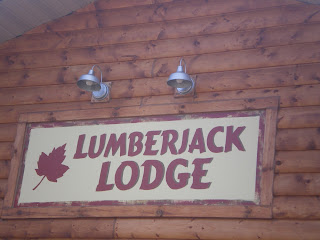 Karol spent much of last week painting the signs that go on the Lumberjack Lodge. There are a total of four, one on each facade. This sign is about 30" by about 7', so you can read them from pretty far away. Now there's no excuses to not call this building by it's proper name! (I think that "women's dorm" is going to be a hard one to break). Then, during last Saturday's work day, a couple of the guys set up scaffolding and hung the four signs. Tim, then caulked them in.

Earlier this week, the guys torched the burn pile and tended to it for a full day, until it smoldered out. They also helped Tim install the enormously heavy concrete counters for the two dorm baths. Yesterday, Tim, Karol, Marceaux and the guys started the tile border in the two bathrooms.

Last week Molly and Karol went to Second Harvest in Omro to get food for our food bank. Those trips always make for quite long days. They left at 7:30 and got home about 4:00. Then the guys helped unload the food so that it could be put away, which took til about 6pm.

Molly and Jen have been doing brushing alot of polyurethane. They put two coats on the 5 sets of bunkbeds and they currently have one coat on the walls in the dorm room in Trapline Lodge. The guys started sanding those walls today so that tomorrow they can put the second and final coat on.

Chrissy got the newsletter done. Many at Camp Daniel contribute with articles, and Karol does a lot of the proofreading, then Chrissy brings it all together. It'll go to the printer this week.

Tony's been spending time building new puppets and costumes for this summer. Our "Trust" theme will be taking on a superhero feel, so he's making stuff to go with that theme. Karol's been working on crafts for camp, plus a few other minor camp things that are good to get done early.

Last Saturday, the Camp Daniel staff descended upon the Kelly's house unannounced. Tim, and his friend, Mike Waldrop were planning to work on electrical stuff for the basement that they're finishing (they need one more bedroom for the kids). They weren't planning on the rest of us, which made it even more fun! We came packing tools and lunch. We got lots more done than they had originally hoped and we're planning another Kelly work day this Saturday. We all feel like poor Tommy has been living in the hallway long enough!
at 9:09 AM