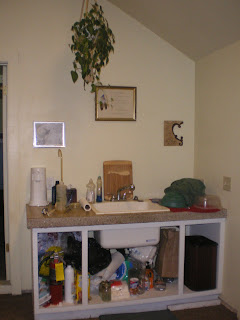 While Jen and Marceaux were in Montana visiting Marceaux' family, Tim was put to the task of building cabinetry in their cabin.  Some cabinets were built from scratch, while other, exiting cabinets, needed doors and shelving.  Above is the before of the sink area, and the after picture is below. 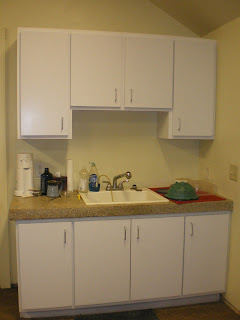 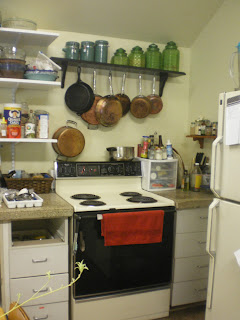 The cupboards added a bunch of storage for them, which the Bury's need in this small area they live in.  Tim painted the cabinets to match the existing ones, which were donated to us. 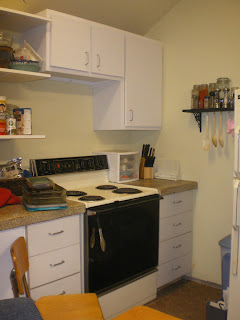 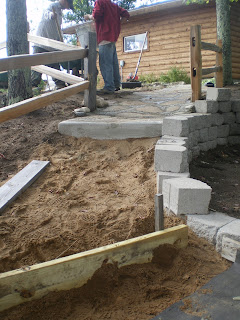 Tony, along with help from the guys, added concrete/stone stairs going from the top of the wood stairs up to Jo and Tony's house.  The entire process took multiple days.  They set flat rocks into the wet concrete for a more rustic look.  The split rail fence  completes the look and functionality. 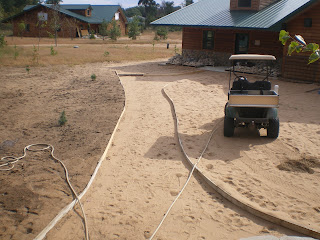 Much of the past two weeks we've been prepping for a concrete pour.  Tony and the guys did the bulk of the work in all of the prep.  The actual pouring of the concrete is a minute part of the total amount of work involved.  In these pics the forms are set.  On the day of the pour, we leveled the sand and packed it.  Then, since the better part of the sidewalks were up against retaining wall, we had to set the 2x4's that hold the pipe that's used to level the screed.  In short, it makes for alot of prep work and a much more difficult job of pouring  and finishing the concrete. 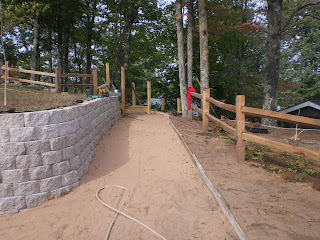 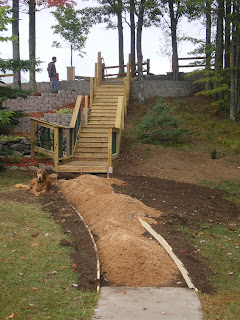 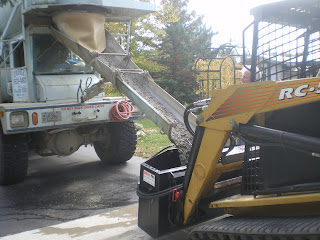 Tony was super excited to be able to use the new concrete bucket for the skidsteer.  The concrete truck was not able to pour directly into any of the forms.  This bucket made this job possible.  Without it, all of the concrete would have to have been carried one wheelbarrel at a time. 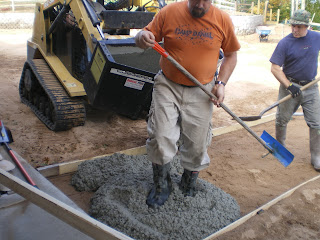 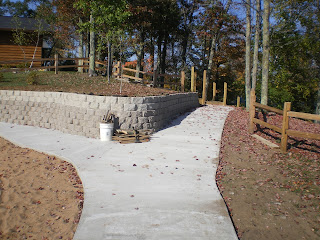 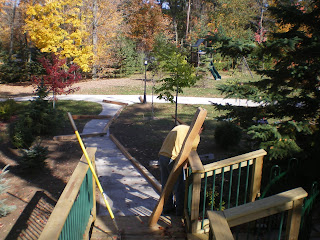 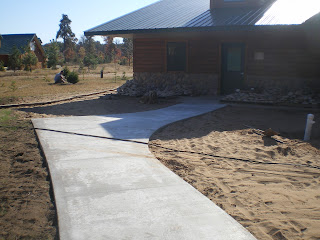 Chrissy has spent some time in the garage, organizing all of the kitchen stuff from camp.  Plus she has been working on the upcoming newsletter.  Molly, Jen and Karol have been taking advantage of the nice weather by getting the gardens weeded and cut back for the upcoming winter.  Karol has also spent a number of days painting the large signs for the exterior of the Trapline Lodge.  There are four signs in all.  Tim Mandich has been cutting down dead trees on the property.  After the strong winds last week, two trees fell on the property. 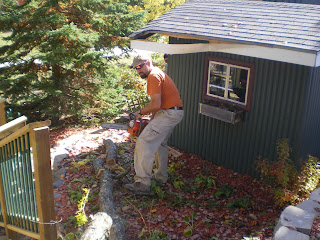 Here, you can see the one tree that fell on Marceaux' dog house.  It just missed the railing and the stairs.  Tim and the guys got both trees cut up and taken out of the way.