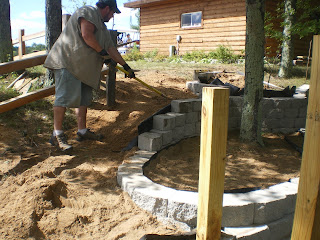 Tony and the guys have continued working hard on the exterior stairs and landscaping around them. The pic above shows the top of the stairs, which will go to Tony Sr. and Jo's house. I love the little garden bed that you can see on the right of the pic. 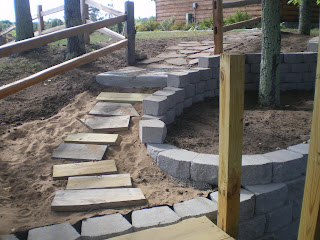 Tony laid in concrete pavers that will be surrounded by grass, then moving closer to the front of the picture, is a small area with the pavers mortared in. The last stretch will be paved the next time we pour concrete. 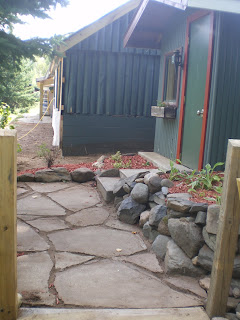 The area in front of the dog house turned out very quaint. In the picture below, you can see the metal gate and fencing. 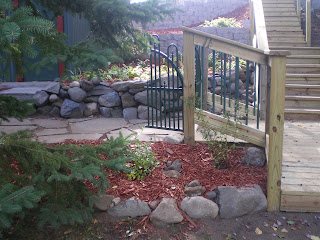 Also since, the last post, Karol, Jen and Molly finished planting all of the plants that we have to put in the ground. We still need more plants for shady spots. We'll do more hostas, bleeding hearts, and hopefully lily of the valley. 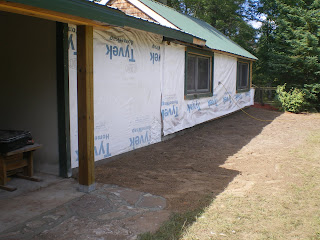 After the guys got the concrete and garden out of the front of Molly's, they leveled the dirt and finished the paver area in front of her porch. Tony mortared around the stones that were there, took out a strip of plants and added mortar to it. The front is now ready for the siding, and a seeping problem that we were having in this building is now rectified. 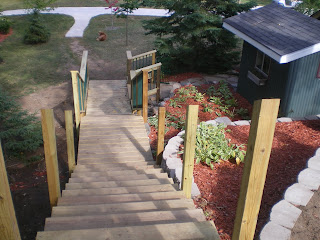 The view in the pic above is similar to a shot in the last post, but here, you can see the rest of the planting. Where there are not yet plants, we still laid the weed barrier down and covered it with mulch. The above pic shows the second level and a bit of the third. The second tier has pea gravel right behind the house. When the planting is done, you won't be able to see that area. The third level has some plants that are out of the shot, but the rest of the planting will be done in the spring. In the picture below, you can see Tony and the guys working on the top tier. The fencing will keep people on the path and going the correct way down the stairs. They also planted 7 trees around the stairs area. 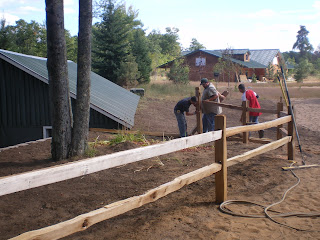 Other things going on include: Karol and Molly cleaned and reorganized the paint room. They added two shelves and labeled each gallon of paint with the area it was used. Tim Mandich met with those involved in the Shopko grant that he is apply for. They went over our proposal to make sure it's the best it can be before it's submitted. The Able Church's Tuesday night program started up again. The Able Attack has a few players bowling and a team doing volleyball this year. Tim, Molly, Jen and Marceaux have been busy getting all of those programs, and the bible studies going.
at 10:58 AM