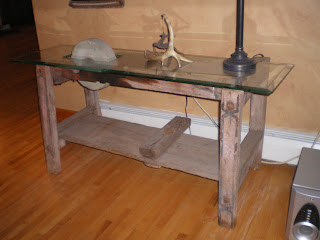 Well, we've had some time to recover from camp, so things are really picking up around the Camp Daniel grounds. The Camp Daniel Appreciation picnic is fast approaching. There are many projects that we want to have done so that the grounds are looking their best. Tony and Karol started projects in the Hartley House. In the picture above you can see that the sharpening wheel table is finally done! They rearranged pictures on the walls and did some general touch ups. Also the extra bedroom that Big Anthony DiBiase and Justin Steiner stayed in was cleaned out to make room for some upcoming changes. Karol worked on the backsplash in the kitchen. Stained wood does not, generally speaking, make for a very durable backsplash surface. It was bleached, re-stained and finished with a clear matt poly. 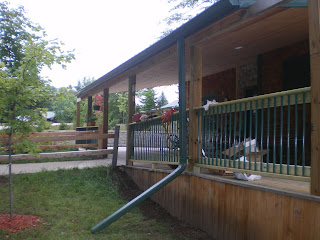 Tony and the guys spend a day plus, working on a bunch of things on the craft cabin. They installed a gutter and downspout. They added treated 2x4's to the bottom of the railing. These pieces beef up the railing visually and structurally. You can also in the above picture that the edge of the grass up against the deck was low, and that they filled it in, raked it out and seeded it. Also, under this porch, Tony finished wiring in two outlets and put the trim on two recessed fixtures. 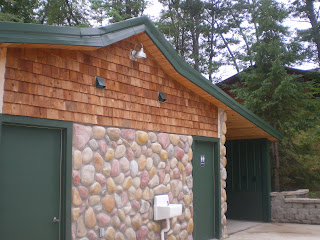 In the picture above are more small projects that Tony and the guys did. They installed the exterior fixture. They also put and outlet and switch in and painted them green to match the walls of the cubby next to the bathroom 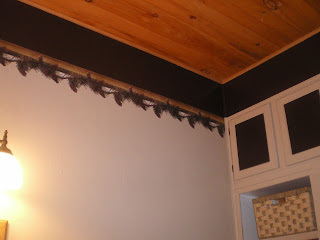 sorry, but these pics are out of order. We're back to the Hartley House. Karol painted the top 12 or so inches in the bathroom and installed a wallpaper border. She also painted the cabinet doors and a shelf under the sink. It's hard to tell in the pic but the color is a very dark mahogany. They also purchased new shower curtains for this bath. Tony and Karol are on the lookout for new mirrors for both bathrooms in the Hartley House. There's still many small projects to be done before the 10th, and with the help of the Camp Daniel missionaries, the grounds will be looking good.
Molly, Jen, Marceaux and Tim Mandich have been busy getting back into the swing of Friday night Able Church and preparing for the upcoming Tuesday bible studies and Special Olympics. Molly has also been preparing her house for Crystal, whom we're hoping will be moving in with her soon. Molly has also been spending time uploading and editing photos from camp. It's a big job and uploading takes a long time, but the pictures are worth it. You should check out her blog to see the most photos. She's also gotten ahead of the game by printing out address labels for the upcoming year for camper birthday cards and Christmas cards.
Marceaux has had some mechanic projects pile up on him over the summer, so he's been busy working on vehicles.
Tim Mandich has been heading up our fund raising campaign. He's working right now with a possible grant from Shopko, that we're all really excited about. He does a great job with that stuff, and has really filled a need on our staff.