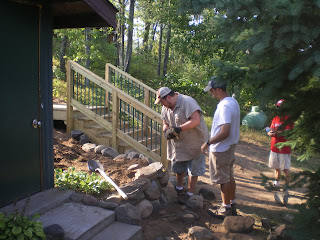 Tony and the guys have been working long days on the outdoor stairs and the area all around it. The youth group that was here this summer put in the stairs, but there was still lots of retaining walls to be built, ground to be leveled, plants to be planted, etc. In the picture above, you can see them working on a short rock wall to hold the dirt in for the first level of the stair landscaping. The bottom level has rocks for it's wall, and the upper two levels have retaining wall. The rocks were all taken from the garden that was along the front wall of Molly's. They were all dug up and moved to the areas that you see here. 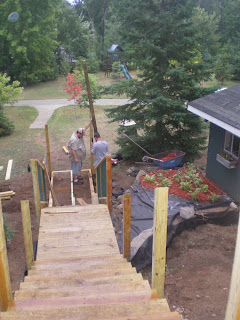 This photo was taken from the top of the stairs. You get a better "big view" idea of what's going on. At the bottom of the stairs, you can see where Tony added an 8' landing. This section allows for a gate that will go towards Marceaux' "dog house" (the kids old playhouse). If you go that way, you will no longer be able to go in front of Molly's bedroom windows. That "sidewalk" is now gone. Also in the picture above, is the beginnings of the plantings. In that section, Karol and Jen planted hostas that were taken from other areas. 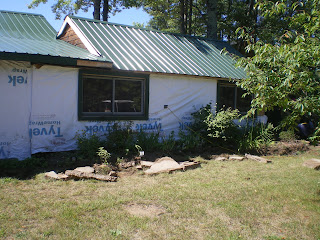 In the above pic, you can see that the guys have pulled up the pieces of concrete that made up the old sidewalk. 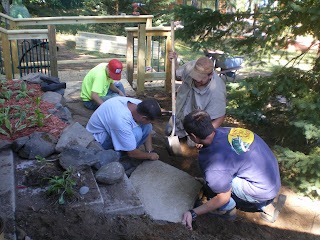 The guys took those pieces of concrete and put them in front of the "dog house". This area is higher than it was before, plus it was just grass in front of it previously. 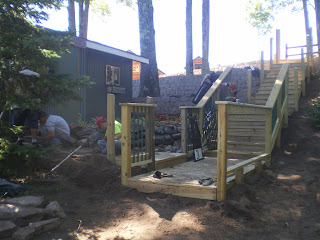 In this picture, the guys have the decking on the bottom landing. Plus, you can see the step up from that section to the gate that will go to the "dog house" 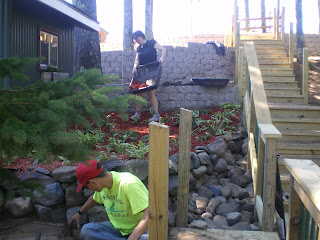 Jen finishing the hostas in the bottom level. 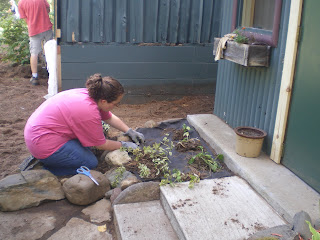 The guys took out all of the plants from the garden in front of Molly's today. Jen, Molly, Karol and Chrissy planted all of them around the grounds. Some went behind the snack stand, some by the office, some in front of Jen's and some to this new stairwell area. Molly is planting in front of the "dog house". In all of the areas we planted, weed barrier was put down, then a hole was cut for each plant before the digging and planting part. It's pretty time consuming during the planting process, but it sure does make weeding easier! 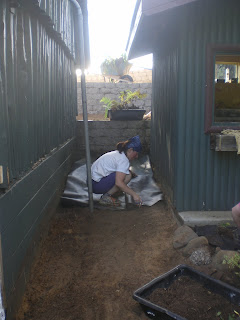 Jen is planting the ferns behind and alongside the "dog house" 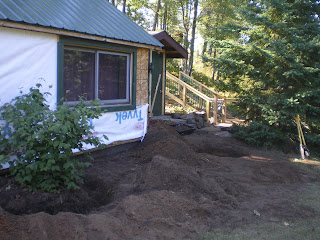 Here you can see all of the plants and rock border gone. All that's left is the large bush. We had to use the skidsteer to move it; all of 10' to the right! 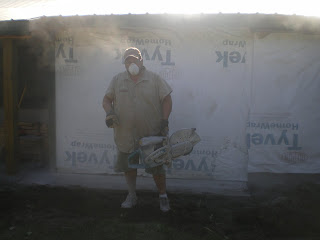 To the left of the old garden in front of Molly's was old concrete slab that extended past the newer closet/mechanical room addition that was put on before the Koch's moved in here. Tony cut the concrete with the concrete saw.... 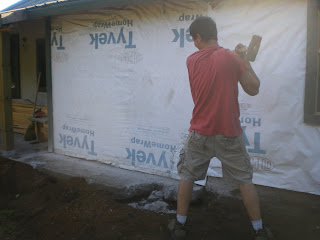 Then Nick got to town with the sledgehammer. They got all of the broken concrete pieces out. This entire area in front of Molly's is now level with the rest of the yard.

Also today, Chrissy, with some help from Karol browned 30 pounds of ground beef, 8 pounds of onions and 7 bunches of celery. After all were cooked, Chrissy mixed it all up and put them into baggies for our chili dinner this coming Saturday at the Camp Daniel appreciation picnic.
at 6:09 PM