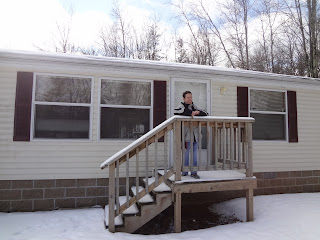 DJ is now a proud homeowner!!  The photo above shows DJ holding the keys to his new home.  It was taken just after the closing this Tuesday.  This has been an amazing process that started many months ago, when DJ received an unexpected inheritance.  We started talking about what DJ wanted to do with this money, and purchasing a home seemed to be the best idea.  We've been hoping for a new group home on Camp Daniel for DJ and the Bury's (whom have a baby on the way).  An ideal situation would have DJ in a home with another person with a disability that is more DJ's speed, and is around the house more that his current roommates.  Jen and Marceaux' baby is due in May and we really wanted to get them into something bigger than their current 400 square foot efficiency quarters.  After a lot of research, inquiries and rejection, DJ was able to secure a loan with our local bank in Crivitz. 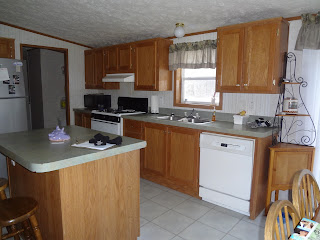 We found this manufactured home with attached garage on 3 acres.  It's a 5 minute drive from Camp Daniel.  The home is from 2003, so is in pretty good shape, but, of course it needs some renovations to accommodate the living situations of a group home.  The plan is to have 1 or 2 additional guys with disabilities move into the home.  With the Bury's as house parents, it will be set up similarly to the Hartley House at Camp Daniel.
When renovations are complete, the house will have 5 bedrooms, 2 baths and 2 living spaces.  As you can see in the photo below, it has a wood burning fireplace.
These pics were taken before the purchase.  It's now empty and the guys have already started deconstruction.  I'll be sure to keep you posted, as we should end up with some great before and after's! 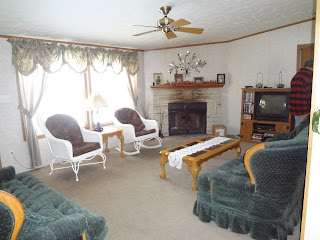 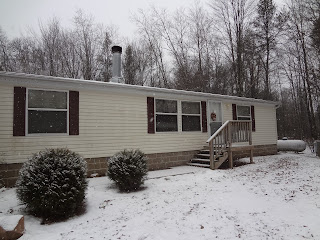 Other news around Camp Daniel:
The Able Attack Special Olympics basketball teams had a tournament last weekend.  They played some really tough teams, and they're excited to get some wins at the next one.
Tim as been spraying polyeurethane on about anything that sits still too long.  Here's the items I can think of:  12 frames that I painted, about 18 shelf/curtain rod brackets, two curtain rods, shelving and entertainment center pieces that Tim built for his basement, a mantel, and a bench.  Even though spraying is much quicker than brushing on the finish, it still takes multiple coats, and with that much stuff, he doesn't even have room enough to spread it all out at once.
Dave Detloff was here this week.  He started on the tongue and groove in the Trapline Lodge.  Last week, Marceaux and Jerod painted the ceilings in the newly plastered rooms.
I feel like all I've been doing is paperwork.  It's amazing how much stuff has accumulated for DJ's house!  Between the loan, the insurance, the title papers and the offer, I may need to get a new file cabinet!  This week, was due the state required water withdrawal report for all 6 wells on the property.  Also due, payee report for Richard, which accounts for all the money he receives in a calendar year.  Lastly, I had to fill out a lengthy report for Brian.  Social Security office wants to be sure that he still has a disability.
Tony and the guys worked in Green Bay a number of days taking apart office cubicles.  Tony was looking on Craigslist for office furniture and came across a guy willing to give away an entire office of cubicles and other furniture.  He just wanted it gone and not to have to deal with it.  So Tony said he'd take it all.  It was over 24 cubes, plus conference room.  We've already absorbed much of it:  Tony and James Kocian are converting a large closet into two office cubicles at Living Hope Church, DJ got a new desk in his new room, we put new chairs in the Camp Daniel office, Tony took a large desk setup for his new office on the Camp Daniel property (to be built this spring), we took 3 nice tables for the craft cabin (since the Bury's will be moving out, it'll be an actual craft cabin soon), Tim Mandich took some pieces, and a walled section is being used in the vestibule at Living Hope Church.  Now Tony is trying to sell what's left, which is less than half of the original amount!  So it's been a huge blessing, but obviously a lot of work taking all that stuff apart, then organizing, then moving each piece here and there.  Who would have known how valuable his cubicle building experience from his American Medical Security days would be!
at 7:13 PM