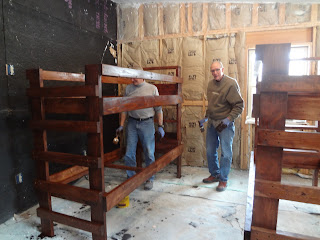 Of course, lots has happened since I last blogged!  Just yesterday, Jeff Sielaf brought 3 men that he knows, out for a work day.  As you can see in the photos, they stained the 6 bunk beds that were built and sanded in recent weeks.  They also stained the corbel brackets that will hold shelves and curtain rods in the dorms.  Those were just built in the past week. 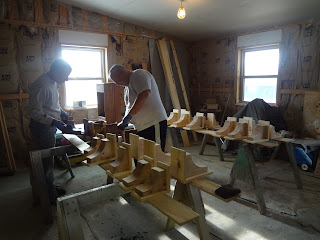 Also, on Monday, we bought a load of tongue and groove, which will be used on the walls in the Trapline Lodge.  In the pic below, you see Richard and Brian stacking them up in the bathroom, which since I last blogged, has been sheet rocked and plastered.  Also getting plastered this winter were the ceilings in one dorm room and two additional baths.  Jerod Kostreva, who has been a great help all winter, learned how to plaster from Tim and did much of the work with the guys while the Kelly's were visiting family in Montana over Christmas.  He even taught the guys how to mix the plaster. 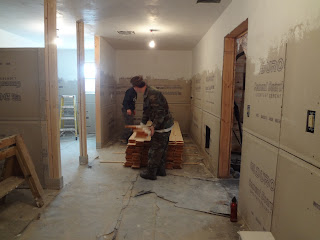 The goal is to have two dorm rooms and two bathrooms done by spring.  The remaining rooms will basically have to wait to be finished until the new garage is built, as they are being used as work rooms.

Another new development in recent months, is the formation of the Camp Daniel Booster Club.  Tim Mandich is leading this group of wonderful people whom are interested in raising funds and awareness for Camp Daniel.  Tony has been working with the group on their first major event, which will be a banquet on March 23, in Green Bay.  They just finished the mailer that gives the information, and those will be going in the mail very soon.  We're very excited for the upcoming event and we're very appreciative of the hard work and dedication that has been poured into the Booster Club and this particular event.

Some camp stuff is underway as well.  It's always good to get as much camp items done as early as possible.
at 8:42 PM