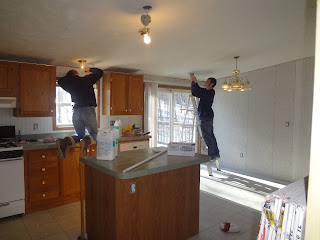 Last Thursday a group of 27 college students and 2 adults from Silver Birch Ranch came for a work day at Camp Daniel.  They worked a half day on Thursday, and they also fit in a half day of work on Friday, before leaving right after lunch.  They had groups to host at their camp, one of which was Living Hope Church's youth winter retreat.  One of the tricky things about winter work days, is having enough indoor jobs for everyone.  We split up the large group into 6 smaller groups.  Half of the groups worked in the Trapline Lodge at Camp Daniel, and half worked on the remodel at DJ's house.  The photo above shows two of the 4 kids that had the job of scraping all of the texture off of the ceilings.  It was a very large and extremely messy job.  What a blessing to have help for such a task!  While the scrapers were in full action, the group in the photo below were working in the garage at DJ's.  To the concrete floor they laid, plastic, then 2" foam, then plywood.  This layer of vapor barrier and insulation will keep the 3 bedrooms that will be in the garage toasty warm in the winters. 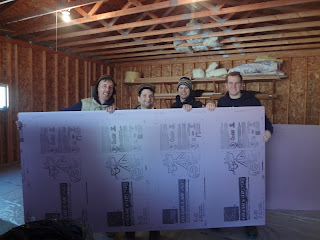 After laying the flooring, this group worked on the old and new entrance to the garage.  We moved the door from the laundry area to the new entry area.  As you can see in the photo below, moving electrical wiring complicated this job.  We are also moving the front door, which of course, had wiring thru that area as well.  Thankfully the crawl space is concrete, so Karol was able to scoot around under the house and pull and push wires to accommodate the new floor plan. 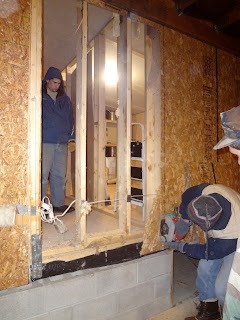 This photo is kind of out of order, but it shows one of the finishing touches still going up in the Lumberjack Lodge.  The half glass doors let in a wonderful amount of light, but they also don't allow for much privacy.  Each door now has a leaf logo representing that particular cabin (that's what we call each of the 4 rooms in a lodge) and privacy frosting.  That combined with the curtains, gives privacy for changing, without dark dungeon feel that you often get in camp dorm rooms.  There were many other details added before the Silver Birch group arrived.  Tim applied a narrow strip to each shower area so that the water from the showers cannot run into the rest of the bathroom.  He and Jerod built and installed a large shelf in each cabin, which will be for lumberjack decorations.  They also finished putting up the last of the curtain rods.  Karol touched up paint and polyeurethane.  We scrambled to get as many mattresses as we could for the bunk beds.  We have about 30, and really need many more. 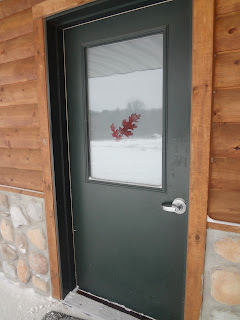 Back to the work day.  One of the groups that worked at Camp Daniel insulated and installed plywood in the attic above the bathroom.  It was a very big job, and they came super close to finishing.  When the last of the plywood goes on, we'll be able to use this area for storage. 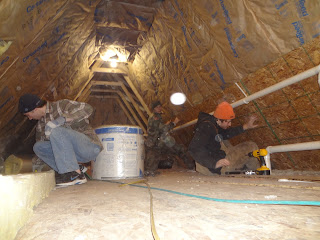 This group plastered the seams in the two bathrooms. 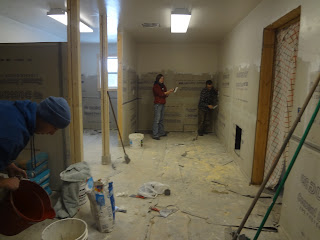 There were 4 people working in this cabin.  Since Dave Detloff finished the tongue and groove in here, it's been ready for the poly.  Over the two days, this group applied one full coat, sanded and applied the second coat.  Done!  They also put all of the trim around the windows in this room and the room next to it as well.  Tim also had kids put outlet covers on all of the outlets in both rooms, of which there are many.  (No counselor at our camps should need to bring an extension cord.  And what will we do with all of the 3 prong adapters that use every year at Lake Helen?) 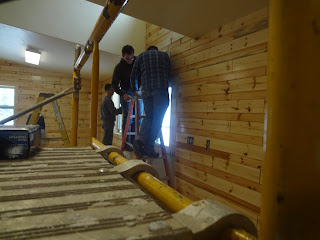 Tim also had a small group take the building materials that had been stored in two bathrooms, organize them, and stack them neatly into one bathroom.  With that task accomplished, we can now tile two bathrooms at once without moving a bunch of stuff around.
I'm sure that I have forgotten some of the many jobs that the Silver Birch Ranch group finished.  It's hard to express what a blessing it is to get such a boost on projects during the winter!  It would have taken us, at least 3 weeks to do all that they did in those two half days.  Plus, I would like to acknowledge what a great group of people they are.  Each year the kids change, but they are always a joy to have and we just appreciate the relationship we have with Silver Birch.  In past years, they even invited all of our Camp Daniel staff out to their camp for a day of food and fun.  Their staff took us horseback riding, on hay rides, rock climbing, and just allowed us to enjoy their facilities.  All of this with no renumeration to them.  They are just really nice people who serve the Lord faithfully.
at 6:13 AM