A Work Day with Variety 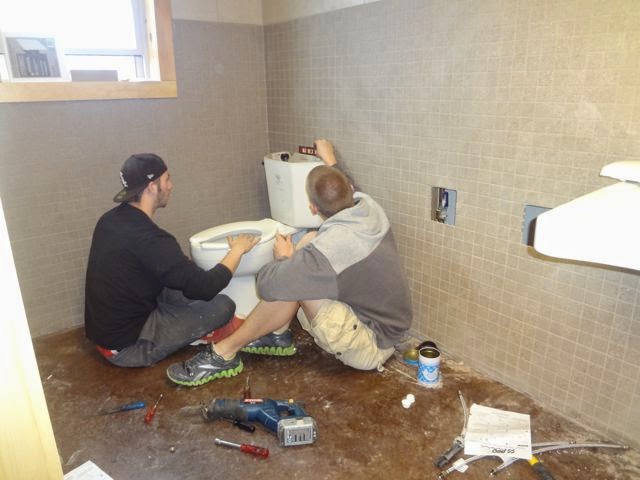 We had a great work day at Camp Daniel last Saturday.  But first, some of the stuff that’s happened since our last post.  Jerry R., a retired plumber from Crivitz, is graciously helping us with all the finish plumbing in the Trapline Lodge.  He had the interns and the guys all helping him plumb.  Above, Steve and Nick are installing a toilet.  This one gave them some troubles.  Jerry is doing a great job of teaching them all, and helping out when they get hung up on something. 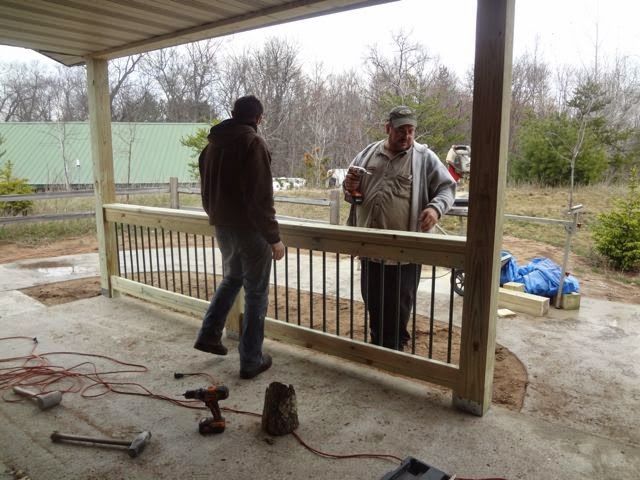 Tony and the guys finished installing the porch railings during the week.  It’s amazing what they add to the building.  They really give a feeling of coziness and character. 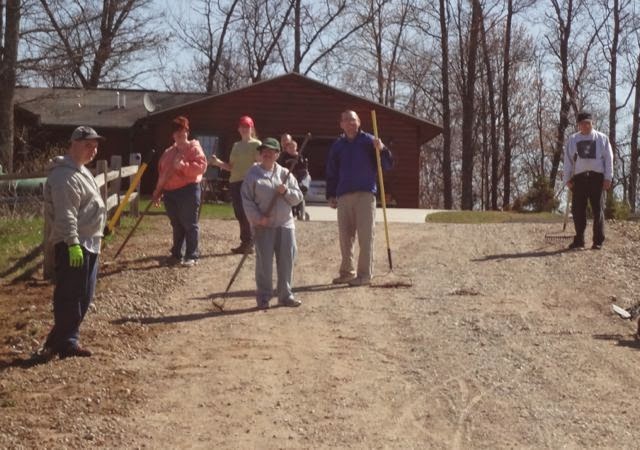 For the work day, we had a variety of workers and a variety of jobs.  The Able Church brings a group each spring and fall for a work day.  This year, 13 were driven up in our large van, and a few others drove separately. It was a blessing to have so many hands at work!  In the photo above, I captured them tackling the less than glamorous job of raking the road back into place.  During snow removal, some gravel and sand ends up in the grass, so it must be raked back into place.  They did this all around the gravel roads on the campus. 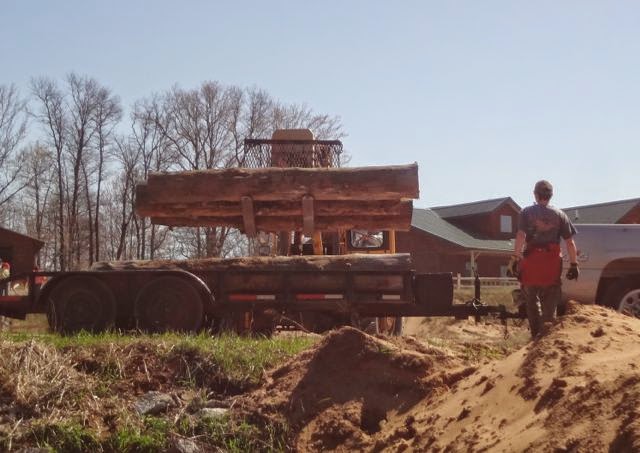 The forklift was used to load some huge logs onto our flatbed trailer, which were then brought to the local sawmill to be milled into 5x5", 10x10s, 5x10’s and 1” boards. 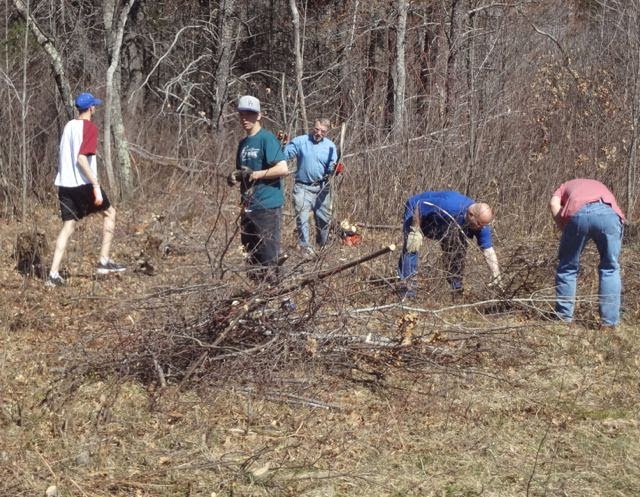 We were excited to have the help of two couples  from New Life Church in Menominee.  One of the gentlemen brought his chainsaw, and cut up more shrubby growth and trees in the area of the future  septic system.  A group of guys from The Able Church cleared the brush and heaped it onto the ever-growing burn pile. 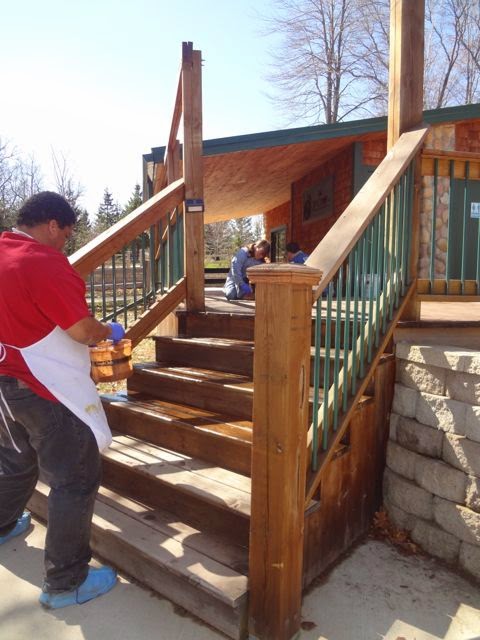 A camper, Drew, and his parents also helped out at the work day.  They live in Suamico, and this was their first time here.  Tony gave a few tours during the day, so that they, and the other new people got to hear some of the stories and philosophies of Camp Daniel.  Intern Steve oversaw the staining crew with, Drew, his parents, Donna and Howard from New Life, and a small crew from the Able Church. They worked until we ran out of stain!  They stained all of the new railings on Trapline.  Also on trapline were some hard to reach places that still needed stain.  In the pic below, they are staining the porch floor of the Factory.  There was also fencing painted, and one railing on Lumberjack.  What a relief to get so much done in a day! 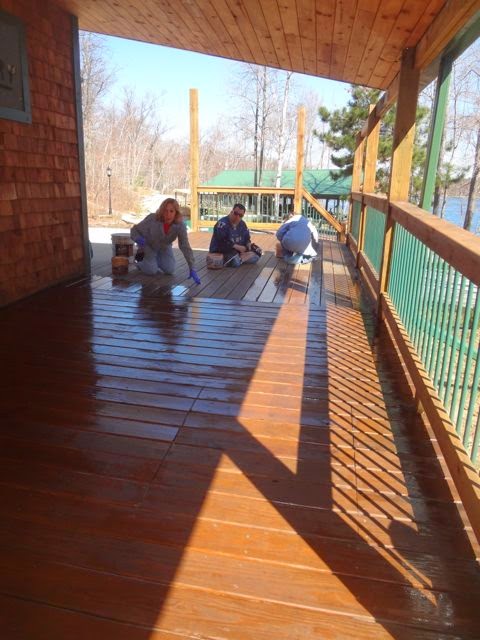 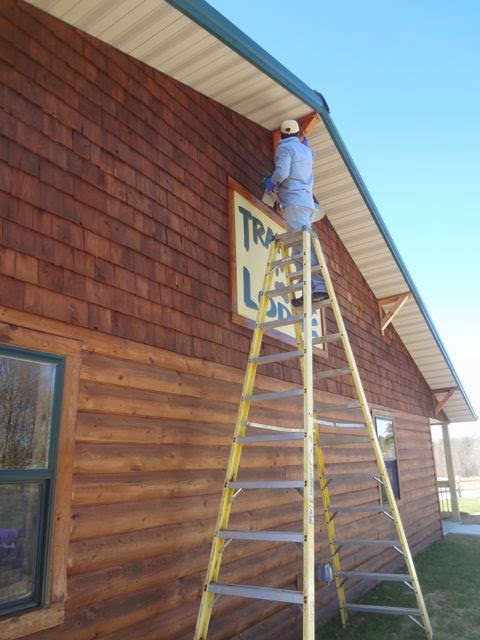 After the brush crew finished with that, they moved on to leaves.  We have oaks that don’t lose their leaves until spring.  So more fuel for the burn pile! 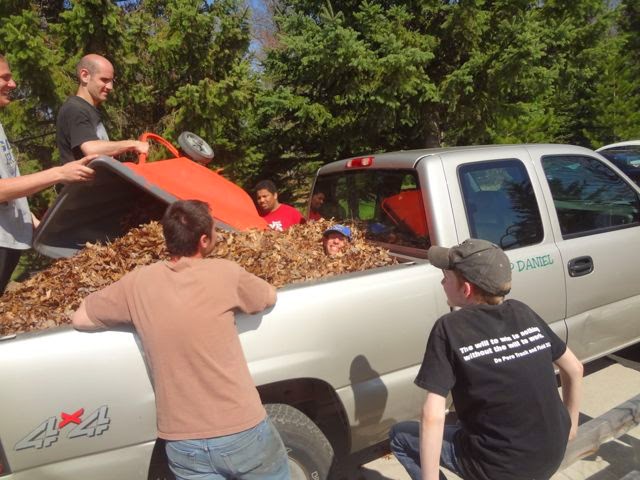 Here’s a photo of part of the tired crew just before they left.  There was a bunch of other stuff done that I just didn’t get pictures of.  For example, some of the ladies helped Trish with drinks and lunch. After lunch, they all headed outside, where Trish led many of the helpers in getting out the 40+wood benches, 100 chairs, and 15+ tables onto the property.  The benches are spread out over the entire property, so I know that she was very glad to have help with that.  The Mandich crew worked on hooks in the dorms.  The new bunk beds needed hooks installed, and the hooks for the bathrooms were mounted onto boards.  The tile on the walls has proved difficult to mount the hooks directly.
Lots of sunburn was seen at the end of the day, as we all enjoyed the thing that we forgot was called the “sun”! 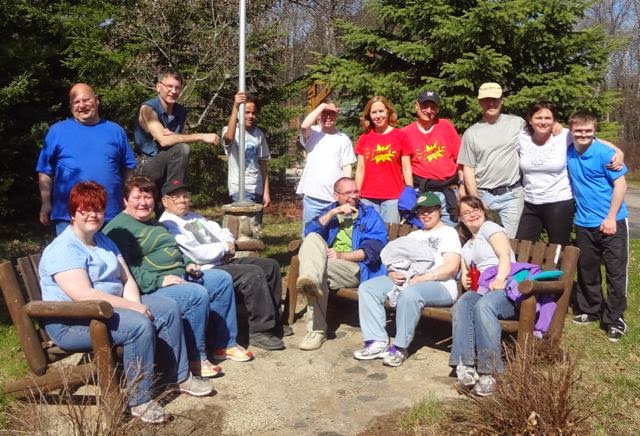