It's been so long since I've last blogged, that I don't really know where to start. So I guess I'll try to go back to the last entry. I gave it a quick look before starting this one, and I saw that I said that the water was coming any time. Well things didn't turn out quite like planned. In the pic below the well guys were running lines for the well. In the sandy soil, to get 15' deep, you have to go pretty wide. The next day the other crew came to finish the process, but they dug up the power lines going to the dorm (not their fault, as the lines were not where everyone thought they were). So this happened in the afternoon on the Friday before 4th of July weekend. We were able to get the power company to come turn off the power that day, but we didn't get power restored until after we were already at camp, so that's over a week. When the power lines were ripped out of the box that's connected to the building, the guts of the box got all busted up. So Tony spent the rest of that Friday calling around trying to get what we needed asap. It was hard to even get a hold of people as many were already on holiday. Tony finally got the sole person at the place that makes them in Milwaukee. It was gonna cost $1,200. Tony didn't even give the lady a sob story, but he did give her our website, which, we assume, she must have looked at because we got the part donated. Tony found out later that she has a child with a disability. Tim Mandich was able to pick up the part in Green Bay that day. Pretty cool ending to a really crappy scenario. 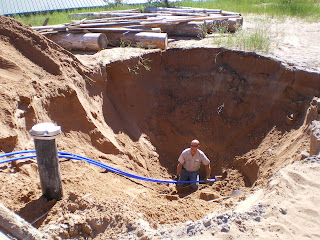 Even after getting the part, it was a slow process getting all of the utilities up and running. The hot water wasn't running until today because the lines had to be pressure tested first. Tomorrow a culligan man will be coming to adjust the settings on the water softeners, which don't appear to be doing much of anything right now. So while the power was out, the week before camp it was all about tiling and grouting. Some days it was just Tim and I, and some days we had the help of many on the Camp Daniel staff. I worked thru the Wednesday before camp, but I had to stop at that point to get camp stuff ready. Tim and the guys kept at it. Tim built the stall dividers, hung the doors, finished trim, installed trim, and did a bunch of mechanical stuff that I don't know anything about. He did have the help of Jerry Reiss, a plumber from Crivitz. He put in a lot of hours setting toilets and sinks and working on the instant hot water heaters. I think he also hooked up the used water softeners that were donated to us by the Catholic Church in Wausaukee. His help was a Huge Blessing! We were also very appreciative of Rick and Carol Bub, whom helped trim the Silver Birch dorm room. Both the Bub's and Jerry even worked while we were at camp. Tim was also able to sneak away on the Monday of each camp. He also worked on the day off between the camps. When we broke camp on Saturday, Tim came back to Camp Daniel in the morning to finish things up. I jumped in when I got back at about noon. It was crazy how much work was left to do. The place was a disaster and many things still needed to be installed, including the shower curtains. You wouldn't think that shower curtains would be that big of a deal, but you would be so very wrong. It's hard to explain verbally, but we needed to divide the shower area into 4 sections; two shower areas, with two dressing areas. All needed curtains for dividers (for certain wheelchair situations). It took Tony and I probably two hours at Menards figuring out how to do it and which materials would look the best and be durable. Well, it all made sense at the store two weeks ago, but yesterday, it was just a blur. It didn't help that some of the parts we bought got separated and lost. Well, we struggled thru and got over half of them up yesterday, but then we needed more parts. When you live in Athelstane, there's no quick runs to Menards. Tony's getting the parts we need today. (He had to go to Green Bay anyways for a meeting with the Hilliard Foundation. We're raising funds for the kitchen/dining hall) So as soon as he gets back, we'll get that done, so that the youth group can have some privacy in the showers. Our Lady youth group got here at about 6pm, which was another blessing, because I was afraid they were going to show up at 4, which wouldn't have been pretty. We had done what we could when they got here, but they didn't have hot water and the dorms reeked because of the coat of poly protectant that Tim had put down in the Red Oak bath just two hours previous. They couldn't walk on that floor til about 9 last night. Below is the pic of the Silver Birch dorm room. The adults from the youth group are staying in there. 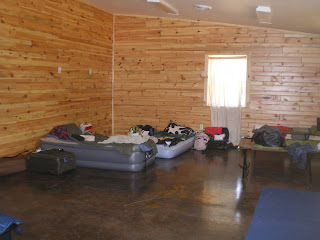 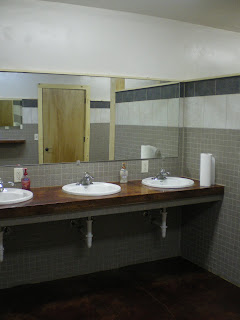 Below you can see the shower area and water closet stall doors in the Red Oak bath. 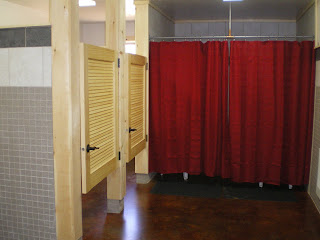 I didn't really say what the deal is with this youth group. In summary, this youth group, from DesPlaines, IL has been coming up to Camp Daniel for a week long missions trip for about 3 years running, and about 2 or 3 times when they were coming every other year. They are a great group that raises all of their own funds for the supplies for whatever projects that they are doing. They are an organized and friendly bunch that are a treat to have around. They are self sufficient enough that it's not a hassle to have them here the week between the camps. And for me, the best part is that they feed all of us all week!!!!! The guys, and George all love hanging out with the kids. I'll blog again later this week and explain more. I'm sure that you're sick of reading this by now anyways.
Oh yea, almost forgot, we had two weeks of camp since I last blogged too!!