It's been a busy week, and the days will only continue to get busier and more hectic. It's different this year, from most because of the deadline to get the two dorm room/bathrooms and new sound and stage trailer done before camp. All on the heels of the Kenya missions trip to boot. So Molly's been doing all of the computer work and data entry for camp. Plus figuring out all of the special diets, which is quite the job, in and of itself. Tony's been working on camp stuff. Finalizing camper/counselor matchups is a major undertaking. Yesterday he had two meetings in Green Bay, then did a bunch of errand running. He's working on the theme for the chapel for camp, buying clothes for the dummies, etc. Tim and Karol have been tiling. After Tim leaves for the day, then Karol works on camp stuff. Unfortunately she's behind on getting camp crafts done and packed, but is now moving along. Yesterday, Bob Wegman came out after lunch to help tile. What a blessing that was. A lot was accomplished and pretty soon the grouting can commence. Below you see Anthony helping out by taking out the stabilizing screws that have to be used to hold the tile up til dried. 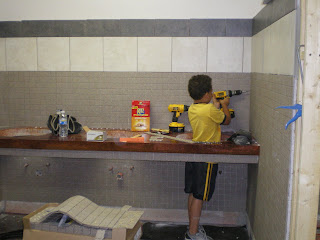 Tuesday the well drilling company came out to drill the well for both dorms (the bathrooms won't do us much good without water!!). The pump guys are here now, so hopefully we'll have H2O today. 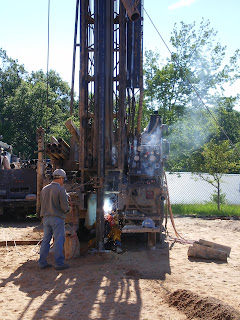 The guys played lumberjack when the well trucks were here. We have this pile of huge logs that will become posts for the dorm porches, and it was in the way. Each log was rolled off behind the dorm. 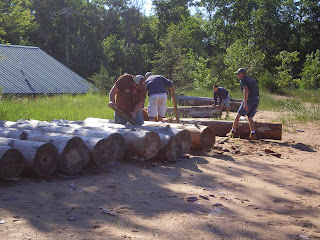 Anthony and Tony have been collecting treasure for months. Well this week they took a quite plain trunk (yea for super clearance at Hobby Lobby) and transformed it into a super treasure chest. You really need to see it in person. Lots of awesome detailing. But hey, that's what makes Camp Daniel, right?! 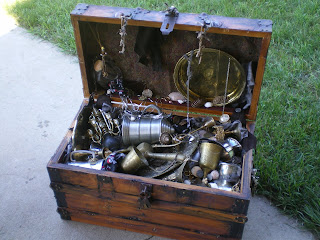 Marceaux got the new axel on the trailer that will be the sound and stage trailer (I'll explain more later). Jen helped Jo with the immense amount of patch sewing that needed to be done. We buy plain hats and shirts and order the patches, then just attach with glue and sew. Tim Kelly and his crew of the Hartley House guys do all of the cleaning, setting up and tearing down at camp. They're called the Pit Crew, so we went with a racing theme and got them a "uniform" of matching hats and shirts in red with black and white. Anthony is excited to join the team this year.