The youth group from a Catholic church in Des Plaines, IL has been coming to Camp Daniel for one week work missions trips for a number of years now. It all started with Cherylee Hamilton at the opera. She got to talking to a lady next to her whom had a home on a lake somewhere around here, and she hosted this group every other year while they did work at the Rainbow House in Marinette. She got us hooked up with the group. For a few years they alternated between Rainbow House and Camp Daniel. Then that lady sold her house, so the group started coming to work at Camp Daniel every year. They are very organized and really know what they're doing. They have a great system down of breaking the group up into "families" of 5 with a college age leader. Each family takes turns doing meals and chores. And each family has a project to work on for the week. Their youth leader, Deacon Jim, comes out in the winter and a couple of times in the spring to decide on projects for them do to and to order stuff from Menards. They raise all of the money needed to do the projects. This year they worked on four different projects:
I have only one picture to represent this massive job. They put capstone on many many running feet of retaining wall. Many had to be cut to fit and they were all glued into place. The capstones really finish off the walls. 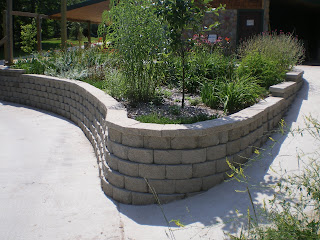 They put in a nice gravel path from the Hartley House deck stairs, thru the wildflower garden and to the sidewalk near the nature center. They dug up the grass/weed/dirt that was on the already established path. They used concrete edging pieces and filled the path with compacted gravel. 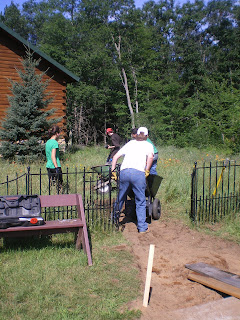 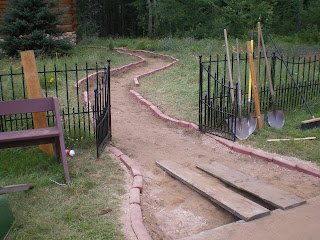 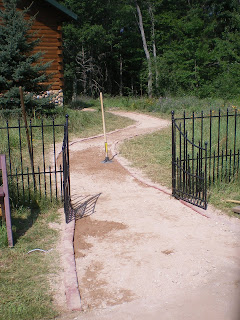 The most difficult project that the group worked on was a simple gazebo or shelter. It has a gravel floor. Eventually, we'll build in benches between the posts. The shelter will be used for prayer and nature studies. 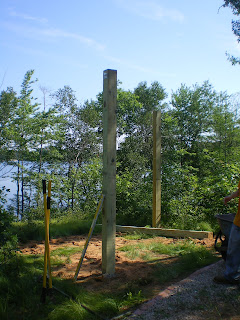 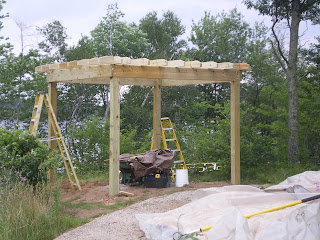 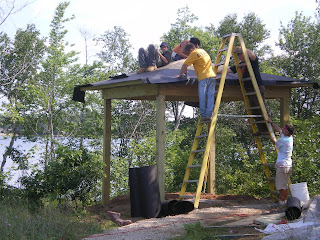 Finally, they installed a long retaining wall at the edge of the sand between the dorm and Tony and Jo's house. There's a huge grade difference between the two, probably 8 or 10 feet, so this retaining wall will hold back the hill. 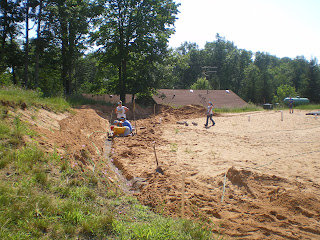 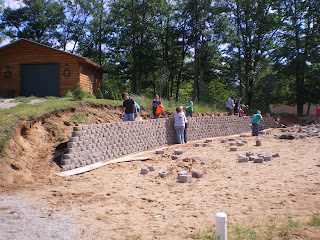 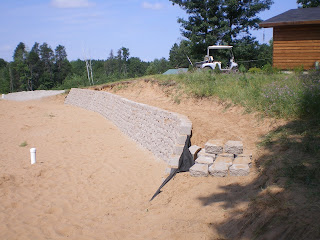 They did a great job, and this group is such a blessing. They all include the guys in whatever they're doing. Of course, George is in heaven with all the people around, too. We've been doubly blessed to have some of the kids come back as counselors at camp. We hope to have more, and look forward to next year!