So, this trailer was donated years ago by Cherylee Hamilton. I believe it was a car trailer, intended for moving vehicles. Well we put sides on it and used it for a number of years as a trailer to bring much of our stuff back and forth to camp. About 3 years ago, on the way to camp, the axle got bent and rendered it unusable. We then got enclosed trailers and didn't really need it for camp, so it wasn't fixed. Then last year, Tony had the idea to turn it into a traveling sound trailer to use at camp for the Two Night Show, talent show, outdoor movie, etc. So the guys removed the walls and the floor so that just the metal frame was left, and John brought it to a "guy" that was going to donate a paint job. We waited until after the Africa trip, but it still wasn't done, so John picked it up and Marceaux did a fabulous job painting the trailer (and his hands!) black. Then a new floor was put on. Then Tony and the guys started to build up. 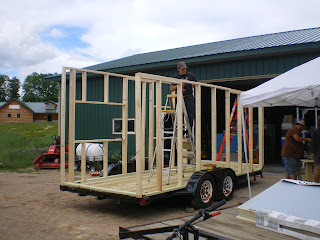 In a matter of a couple of days, the walls were done, roof was on and the shelving was built on the inside. The trailer has a roof off the front that folds down for travel, and is light weight. It's made from corrugated plastic panels that let in some light, which is great for inside the trailer. There's a ton of storage for sound equipment. Everything that we need to run a show is wired thru the trailer: mics, speakers, dvd, lights, disco ball, video projector, etc. In the pic below you can see the large window on the right. That's the sound area. The large window on the left is a puppet window for Georgie and his friends. We put a dutch door on the end and a window for people to talk to whomever is running sound. So over the course of the three weeks of camp, we've continued to work on the trailer. The second week of camp, a group from Honey Rock Camp/Wheaton College came to Lake Helen and worked for a day. A group of girls got the siding of the trailer painted black. Then between the camps, Molly and Karol primed and painted green the trim. The doors were primed and painted black, as well as the posts and frame of the roof. Then, during the third week, Tony and Karol got the curtains up. Also, by then Tony figured out better what we needed and he rewired and fine tuned some things. 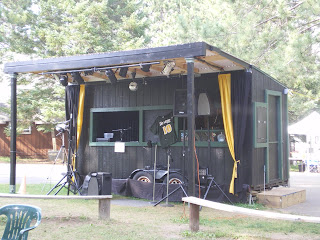 It's really been a great addition to camp. It adds to the quality of the camp, while making our jobs all a lot easier.