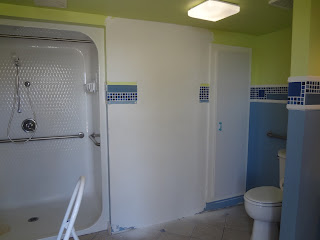 It feels like lots has happened since our last blog post, so I'll try to get you up to date.  Last week, Tony and the guys spent a day cleaning the craft cabin and bathroom.  Then Tim and the guys blocked off the opening between the two so that the bathroom can be used from the outside.  Jerod was here plastering the craft cabin, so Tim was able to use some of Jerod's plaster to finish the wall on both sides. 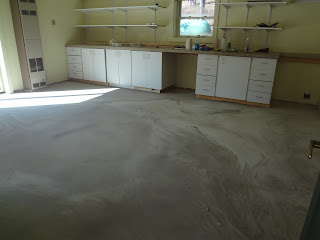 After the craft cabin (above) was clean, Karol touched up the walls with paint.  Then Tim and Jerod used a self leveling concrete product on the floor.  The floor was very unlevel, it had a large crack and it had a lot of glue residue from old carpeting.  This product addressed all of these issues.  Now we will be able to use the concrete dye and clear finish for this space. 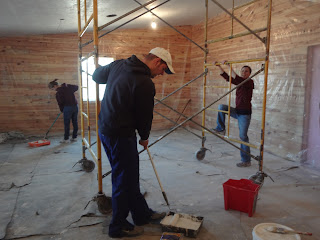 Last Saturday we had a well attended work day. We had a group of 5 from Concordia College, a group from Risen Hope Church in Random Lake, and the Able Church.  Many projects were completed.  I have photos of some.  Above:  primer and paint in the Trapline Lodge dorm room.  Also painted were the bath in Trapline and the newly plastered walls in the Nature Center. 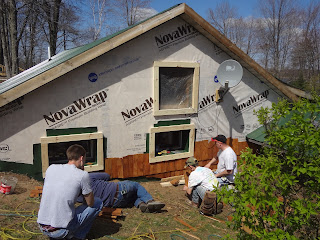 Jerod spent some time on Friday preparing the side of Molly's house for cedar shakes.  He put on the metal flashing so that this group could trim the windows and start with the shakes.  Another job accomplished, was the installation of the exterior lights flanking Molly's front door. 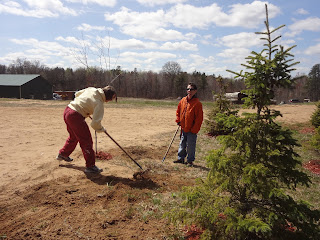 One of the jobs that the Able Group worked on was raking out areas that need grass seed spread.  The photo above shows DJ and Crystal raking away! 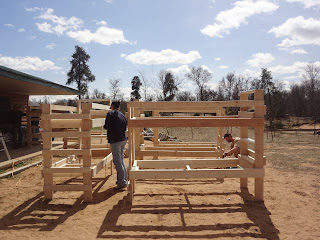 We took advantage of the good weather by assembling the bunk beds outside of the Trapline Lodge.  After assembly, they were sanded. 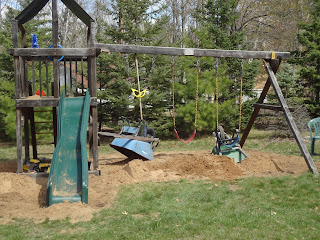 The playground area needed the encroaching grass pulled out and fresh sand brought in.  They were working so fast, that by the time I got there to take a picture, everyone was gone! Another project to check off the list was one that Tim Bazet-Jones finished.  The gable ends of the Trapline lodge were still needing the angled corbel/bracket pieces.  There were 10 in all to do.  This was one of those jobs that no one really wanted to tackle; mostly because of the very tall ladder required and the feared "double angle" that needed to be figured out to get the bracket to fit.   Tim took on the challenge and did a great job of it. 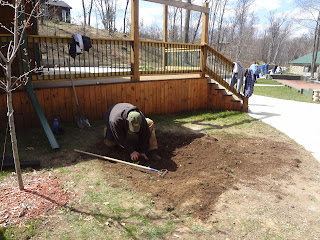 Tony and the Able group worked in a few specific areas of the grounds where water drainage is an issue. They dug out the grass and dirt and put in strategically placed swells with extra drainage to keep some of the runoff water under control. 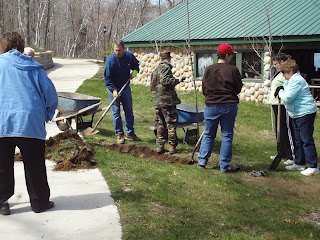 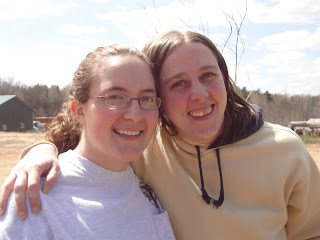 And finally......Sunday after church Crystal moved in!!  Yea.  We have been waiting a long time, but the day did finally come.  Crystal and Molly are both working at getting her settled in.
at 12:29 PM