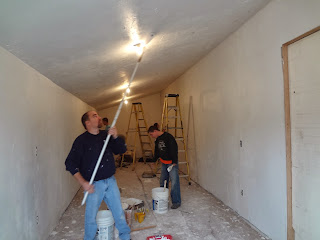 Last Friday and Saturday, Camp Daniel hosted it's last official work days for the year 2013.  We were blessed to have multiple groups involved in the many projects that were tackled.
Friday afternoon 8 people from Word of Grace church of Sheboygan arrived ready to work.
They started by priming the new/temporary work room.  It's the old shed roofed wood shed on the backside of the garage.  It was enclosed this summer, and the guys have been working hard to get it ready to paint.  While some were busy there,
the rest got a tutorial on how to tile a wall.  Karol and Nick Sterry worked with the volunteers, and working together, they got far. 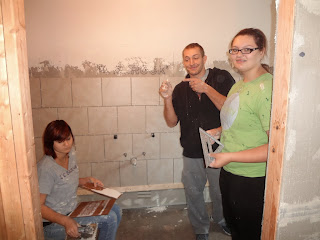 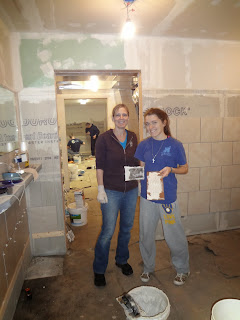 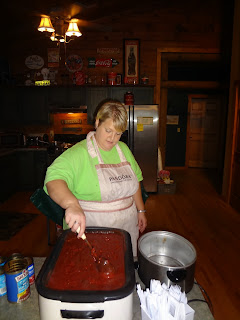 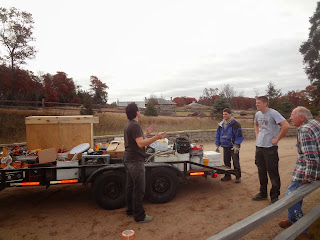 When volunteers were working on projects, Trish was busy in the kitchen preparing meals for everyone.  Over the course of the weekend, she served over 120 meals!

On Saturday, a group from Woodland worship Center added to the mix.  We continued with tiling, and after the workroom (which will eventually be a backstage area of the future dining hall) was painted, the crew began to move all of the tools from the dorm. 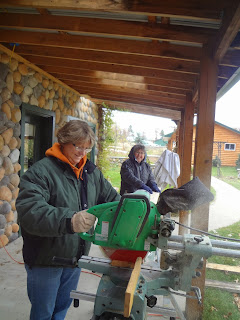 An additional group started on the tongue and groove on the ceiling of the Hartley House porch.  This is a job that we've wanted to have done for quite a while.  As you can see in the pic above, they had a good system going with the guys using the nailers to install the wood, while the ladies' were in charge of measuring and cutting.  This was a big job that will have to be finished in the spring.

Below, is Tony really pondering something profound, or is he just trying to figure out why the tile doesn't go the edge of the wall? 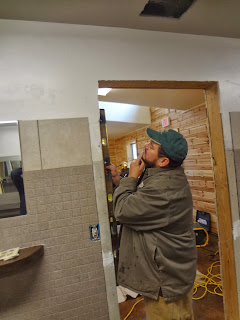 Overall, this workday finished out the season with a bang.  We were very happy with how many different things were done.  We had as many as 35 people working at once! That takes a lot of coordination and preliminary work, but when it's all done, there's few things more rewarding than seeing how much was accomplished.
THANKS TO ALL WHO HAVE VOLUNTEERED AT THE CAMP DANIEL GROUNDS THIS FALL!!