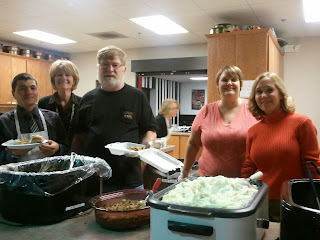 The Friday before Thanksgiving, The Able Church holds its annual Thanksgiving dinner.  The turnout is always good.  Check out the food in the pic and you’ll know why!  This year approximately 140 people were in attendance for the service and dinner.
Thanks to the many many people that worked together to make the night special.  The Able Church is blessed to have such wonderful volunteers.  I won’t even attempt to name everyone, because I don’t want to miss any!
Also a special thanks to those that drive people to and from Able Church each week.  What a dedicated and serving group. 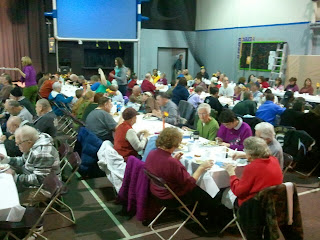 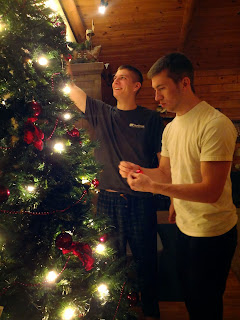 The Christmas season is well underway here at Camp Daniel.  The Hartley House tree and decorations were put up this week.  Richard, Nick, Brian, Justin, Steve, Nick Sterry, Anthony and Karol all pitched in to transform the Hartley House for Christmas.
The tree is a tall one, even Nick had to use a chair to reach the top!

Of course, lots of other things are happening around the grounds. Like the official start of the Shoveling Season!  Unfortunately this first snowfall had to be handled a bit old school the first day, as the riding snow blower was out of gas the first day and the plow truck was in the shop!  Marceaux did make a gas run on Wed, and Trish was then able to train Nick Sterry on using the riding snow blower.  Since the truck was still gone, he had a large job of clearing sidewalks and as much roadway as he could.  We did finally get the truck back, but remaining snow is now solid ice.  Praying for some warmer weather that can melt said ice before the next 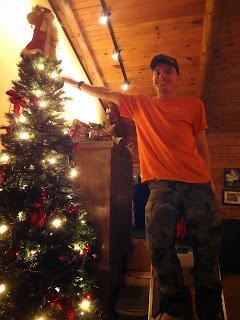 snowfall. (And for a regular snow blower that can fit where the riding one cannot.)

Tony and the guys are still putting things away in the tool room in the garage.  Karol and Tony have gotten in a couple of days on “The Factory”, (the craft cabin.)  It’s getting close to completion!
Molly has been working on the Christmas cards that we send to campers.  She is now also in charge of lining up the worship leader for each Friday at Able Church.  She has also been working with the Special Olympics teams.  The fall season sports are finishing up this weekend with State level competition, and the winter sports have been practicing for several weeks.  Those tournaments will start soon.  Molly is learning from Jen all about the ins and outs of running the Special Olympics teams.  There’s so much involved, but she’s doing great so far. 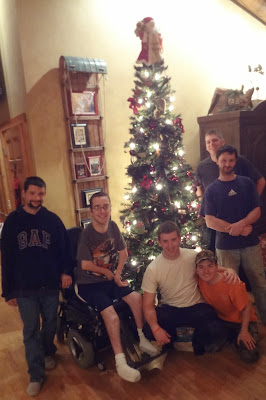 Marceaux has been working on the vehicles around camp, and getting things ready for winter.
Steve and Nick worked with Karol again this week on tiling.  Hopefully, that will be done next week.  Before we know it, everyone will be leaving for the holidays!
at 11:54 AM