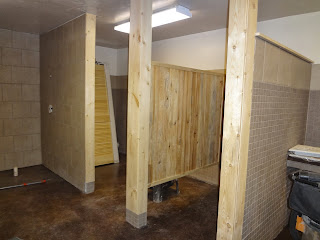 The missionaries at Camp Daniel have been plugging away at many projects as of late.  Helping them with the progress has been Dave Detloff.  Dave has put in many hours doing volunteer construction at Camp Daniel.  Dave is responsible for just about all of the tongue and groove and trim in the dorms.  Lately he has been at other jobs around the campus.  He worked with the guys putting up many gutters and downspouts on multiple buildings.  Last week, he started working on the stall walls in the bathrooms of Trapline Lodge dorm.  You can see in the first photo that he trimmed out the posts, and built the dividing wall.  He is also hanging the doors, which have to cut down to a smaller 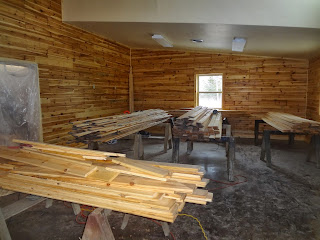 length, fitted with hinges and doorknobs and installed.
The second photo shows where Dave had the guys bring inside the tongue and groove that he will install in the 4th cabin (dorm room).  Inside in can stay dry and get some preliminary sanding.  Richard, Nick and Brian started sanding the boards over the weekend.  I think it’ll be a big job to get them all done. 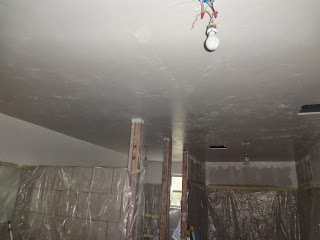 The ceiling in the 4th dorm bathroom hadn’t been plastered previously, as this room was being used for tool storage.  So after all the tools were moved to the garage, Tony and Richard plastered the ceiling and upper walls.  After it was thoroughly dry, Nick and Steve received a quick tutorial on painting by Karol, then painted the areas with primer and 2 coats of paint. 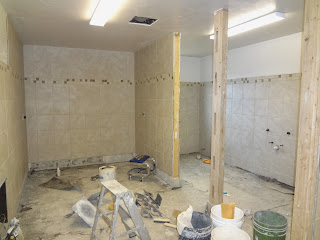 We are almost done tiling in the last two bathrooms. One bath is grouted as much as possible, while the other will be grouted soon.  It’s a job that we do with as many hands as possible.  Before Thanksgiving, those working on grouting were, Steve, Nick, Molly, Jen, Trish, Karol and the guys.  We have a decent system down now, so hopefully the last bathroom will only take one or two days. 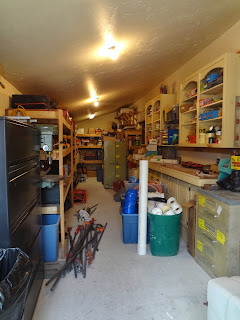 The picture on the right shows the “after” of the new temporary workroom that’s attached to the garage.  After the items were moved there, Tony and the guys spent many hours going through every box and crate.  They organized and threw away that which isn’t useful anymore.  That’s the one plus side to this stuff being moved so much...it gets more organized and well labeled with each move! 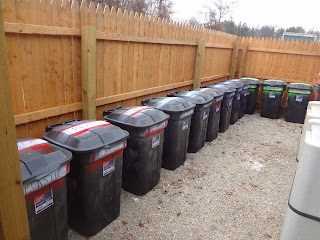 After the last newsletter, Camp Daniel received money for new garbage cans for the recycling center.  Last week, Tony bought the new cans and after talking with the guys about which cans get filled the most, he labeled the 12 cans.  Now we will have enough room for all of the recycling items, without cans overflowing or tipping over!
at 2:52 PM