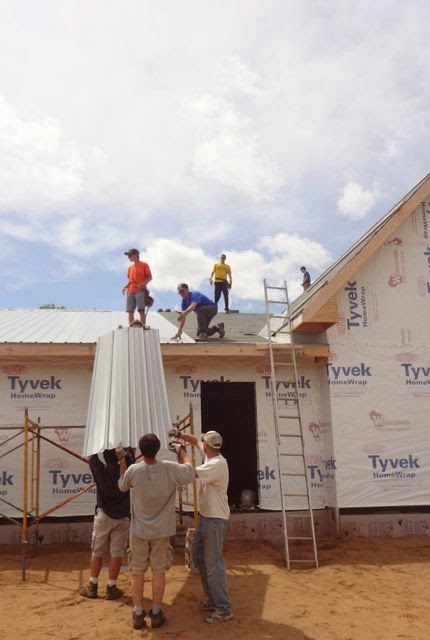 Last week, Camp Daniel was very blessed to have a great work week with a great group of people.  St Paul’s Lutheran, in Sheboygan Falls, is the home church of the Weidner family.  It was through their connection that we connected with the pastor in charge of the missions trip for this year.  There were 17 people here from the Sunday afternoon of Father’s Day until Friday afternoon.  Kids and adults alike fused to make one team.   They were put to work on multiple jobs on the Camp Daniel campus.  The most important job needing done was putting on the metal roofing on the new building. Our guys worked alongside the volunteers to get a large job done.  In the photo above, you see them putting a panel on the roof.  It was a 6 man job just to do that as the long roofing panels were over 20’ long. 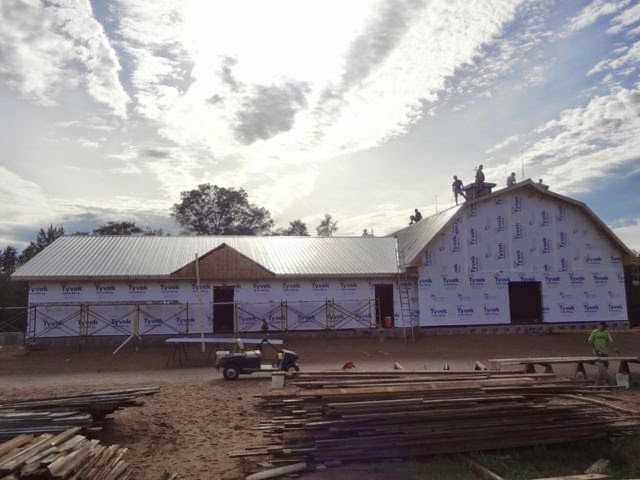 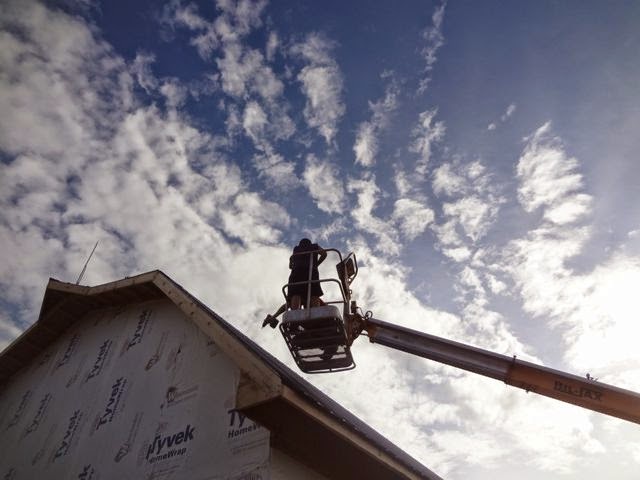 On Thursday, we rented a high lift to finish the lower barn panels.  They were too steep to allow someone to be on the roof.  They finished just before dinner on Thursday.  One of the other large jobs was pulling nails from all the beams and wood that we salvaged from the two barn “unraisings”.  Now all that wood is ready to be used in the new barn.  It was a huge job that would have taken our guys months to accomplish.  We tried to express our gratitude, but I don’t think that words could adequately express it. 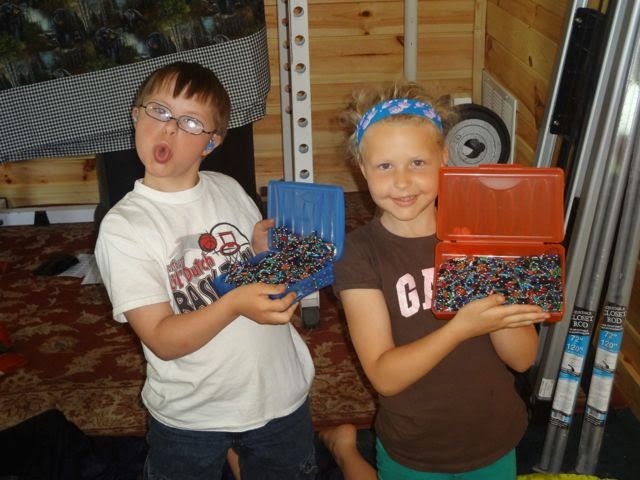 The Weidner kids worked too.  They helped Karol with crafts, and they also worked outside on some small landscaping jobs.  Goes to show that you’re never too young to serve others!  What a great example they are to all of us. 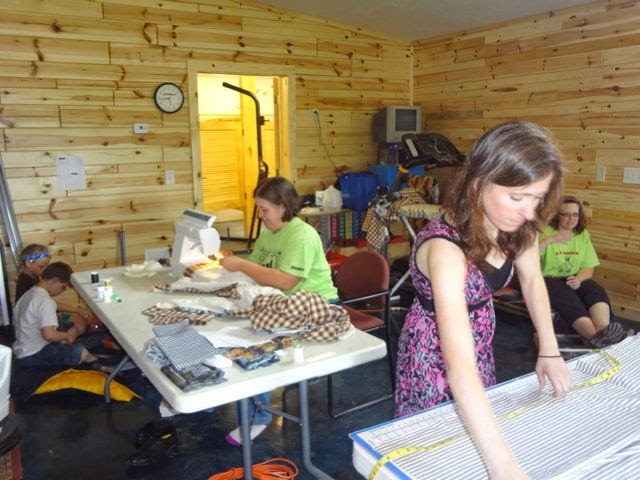 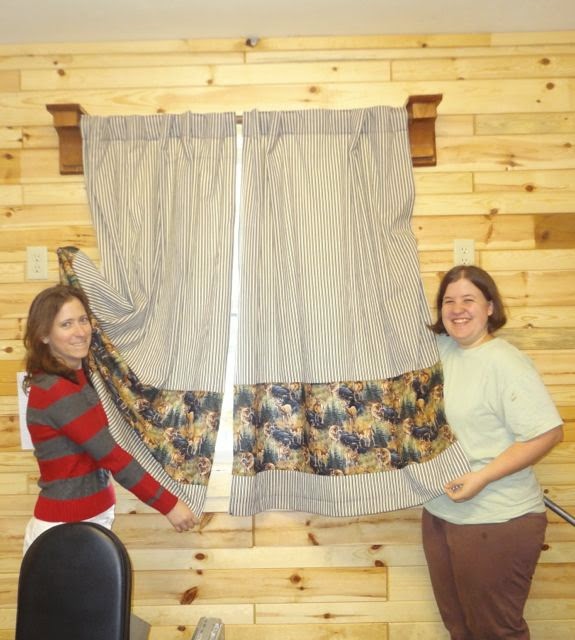 Jen and Amanda spent the week sewing curtains.  They had been started during a prior work day, and between the two of them, they were able to get all the curtains done in the Trapline Lodge. 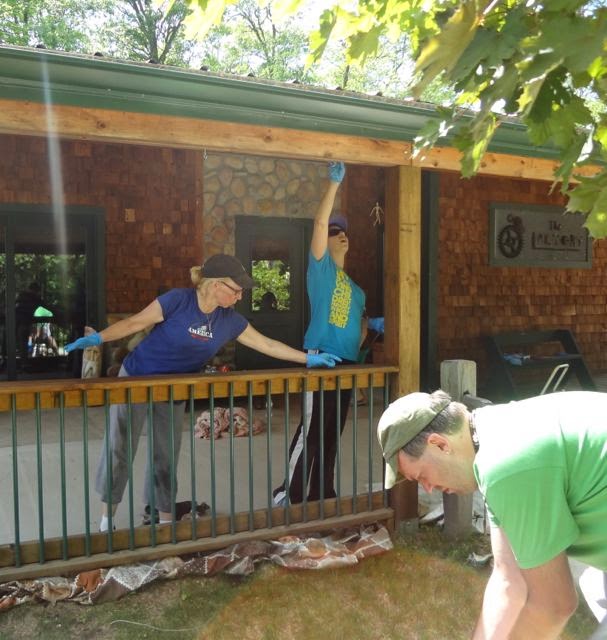 Karol and Molly helped with a group that alternated between exterior staining, and craft jobs in the Factory.  They finished the stain on the dorms and railings.  Then they stained the exterior stairs and the bleacher area around the fire pit.  Finally, they stained the railings and cedar shakes on the factory.  In all, they used 10 gallons of stain!! 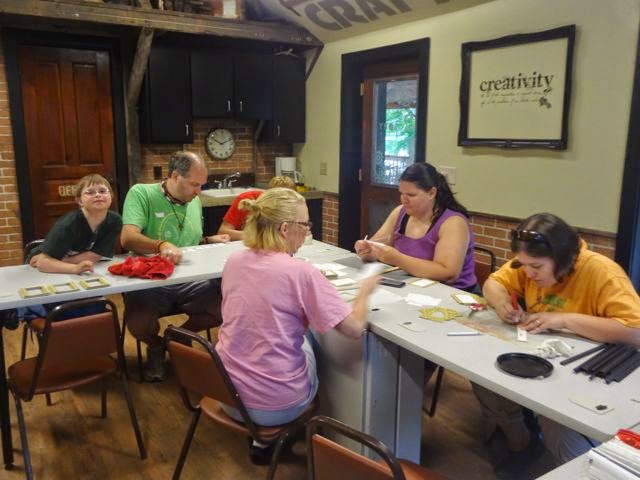 When it was raining, or the stain fumes were too much to bear, that group worked with Karol in the Factory.  There were many small jobs that needed to be completed for the summer craft projects.  Well, what is a small job isn’t so small when you have to do it 200 times! They also helped Karol with all the clothing in the photo below.  These are all items that we purchased on clearance at retailers; we used some awesome modern technology to put Camp Daniel logos on each item.  It’s a time consuming project, but we produced a lot of great items for Papa to sell in the shop! 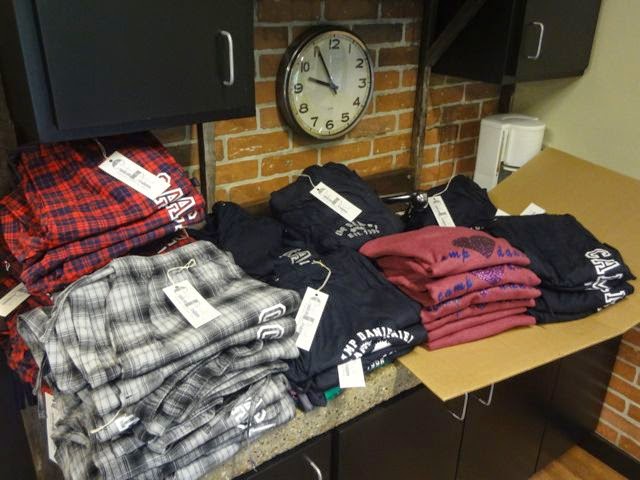 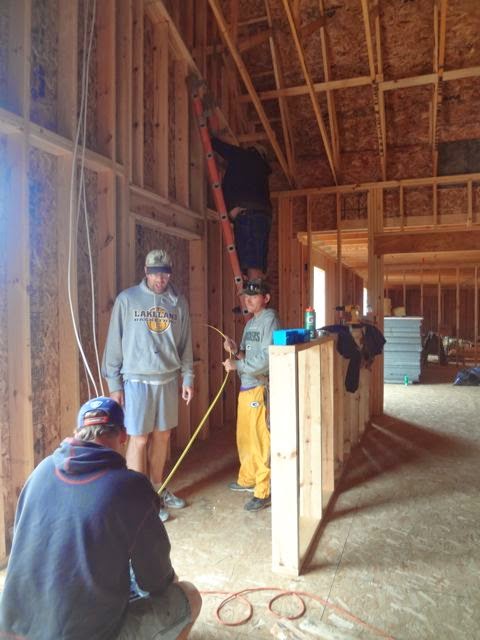 After the roofers completed their task, they set to working on electric in the barn.  They got a good start on pulling wires for outlets and light fixtures.  In the photo below, Steve and Nick are installing a catwalk that will be used for sound and video wiring. 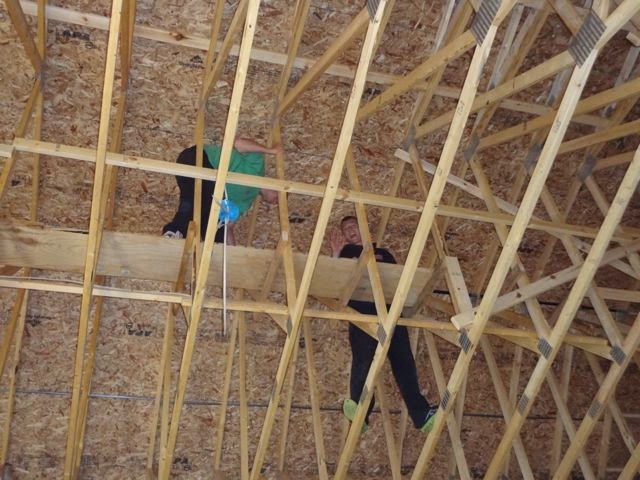 We hope that they come back again next year!!!