Last week, the guys went on their annual vacation along with Tony, Karol and the kids. This year they chose to go to the Wisconsin Dells for 4 nights. They played in the waterparks, went to the House on the Rock, Ripley's Believe It Or Not, Tommy Bartlett Exploratory and Knuckleheads for games, rides, and bowling. 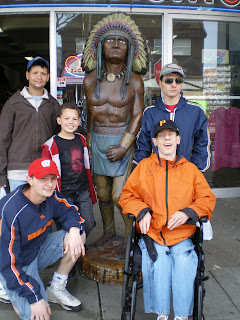 Getting ready to play laser tag. It was a lot of fun!! 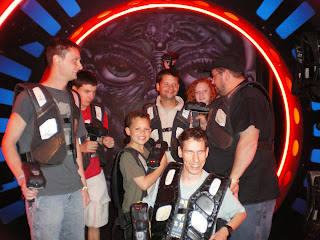 Saturday, we had a work day. The Green Bay Community Church sent a great group of about 15 volunteers. They got so much different stuff done. What a blessing this work day was. The ceiling of the craft cabin porch is now all done in tongue and groove. 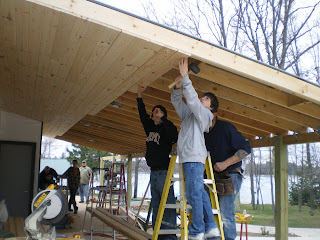 They got a bunch of rows of shakes put on the gable end of the craft cabin. 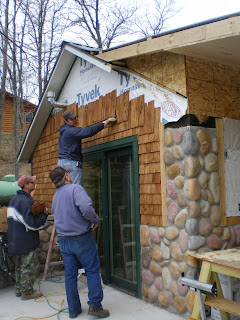 A couple of bundles of cedar shakes were stained. 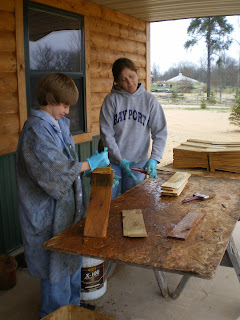 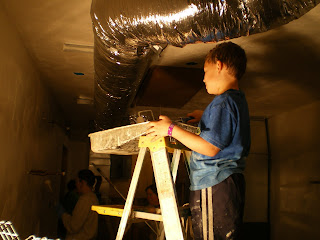 The second bathroom was fitted with the stall divider wall, which was covered in cement board, taped and mudded. 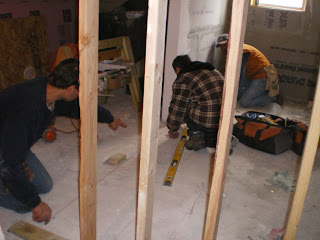 Nancy List also put in a full day's work (which is the same as most people's two days of work) before heading to the office for a Camp Daniel bored, I mean board, meeting. 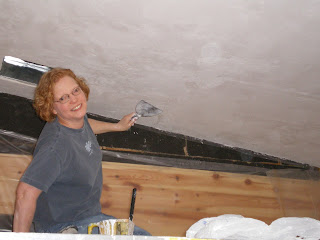 Not pictured, but also worked on:
The soffits of every dorm porch (8 in all ) were screwed to prevent bowing
The lights and ceiling fans were installed in two of the dorm rooms, and the first light was put in bathroom one.
David Detloff from Green Bay has put in many long days working on finishing the tongue and groove in the first two dorm rooms.
The cedar shakes on one section of the craft cabin was started.
Also worked on since I last blogged:
Tony and the guys got the rest of the Hartley House cultured stone mortared on. This took many days, and was a lot of work. They've also started the tuck pointing which will take several weeks to finish. They also finished the shed under the deck, minor landscaping, and also worked on trim work on the porch. Tim touched up the exteriors of the dorms, which both needed caulk and screws on some of the log siding. We've all also made many a trip to Menards for materials. Tim stopped in at Daltile to pick up a tile donation. The tile will be used on the walls of the dorm baths. He got it while the Hartley House crew was on vacation, so he ended up spending a half a day just to unload the 1,800 square feet of tile and stack it in the dorm. That was a day he needed the guys help! He also did a bunch of work in bath one of the dorm to get it ready to tile. I'll spare you the details and just show you the pictures when the fun stuff starts. Tony has been working on donations of tile, adhesive, and grout and was successful in getting two pallets of adhesive and grout donated. He also has met with Van DeYacht well drilling who will donate the wells for the dorms along with many of their suppliers.
Tony Spent time working on the bus fuel line and video system and Karol has been learning to use the new program and vinyl cutter to make graphics for the bus and Camp Daniel Signs.
Tony , and DJ spoke at the Presbyterian Church in Crivitz, who was Camp Daniels first supporting church.
Marceaux has spent much time doing spring maintenance on the heavy machinery and vehicles of camp. he also put in somedays getting the MEGA Bus ready for the Memorial day parade in Depere. Jen and Marceaux and Jen's parents went to Montana for the week for wedding showers and visiting Marceaux's family. Tim and Chrissy left for Minneapolis Friday for a Missions Convention at Bethany College. This capped a two week long blitz of fundraisers, meetings, and frenzy for the Kenya Missions Trip they are directing and Tony and Tim Mandich are going on with them. Check out the Living hope Church Missions blog at (www.lhcmissions.blogspot.com) for more info on the trip.
Tony Spoke at Living Hope Church to invite the church to be counselors at Camp and made an official announcement that Tim Mandich is coming on board full time with Camp Daniel. As John and Sue Koch open the new Able Church in Rochester MN, Tim will take over the pastorate of Able Church with Jen, Marceaux and Molly as his assisatants. Tim also is taking on the title of Development Director of Camp Daniel. He has ben working the last two weeks with Little Tony on a master proposal to get out to foundations asking for donations to the phase two building Capitol Campaign. He has met with several foundation directors and is pursuing grant opportunities. Tim will work with Chrissy in this department. Tim also is learning the accounting and office procedures from Tony Sr. in order to help run that side of the Camp Daniel Ministry. Tim has been voted in to the Camp Daniel Board, and will take the title of secretary, working with Tony Sr., little Tony, Jim Hukill and Nancy List.