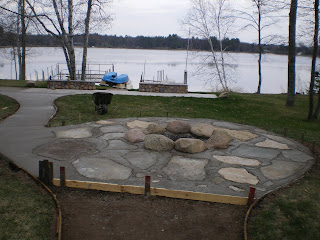 Much work has been done on the Camp Daniel grounds since I last blogged. Below is the new sidewalk and area around the firepit. Tony and the guys worked for a good two days to prep the area. We (Tony, Nick, Richard, Brian, Tim, Karol, Marceaux, and Jen) poured on Thursday. It was a little different than previous pours in that we laid large slabs of slate and some other kind of stone (thanx again to Green Bay Nursery) into the concrete around the firepit. Troweling around the stones was tricky, as was keeping everything pitched properly. 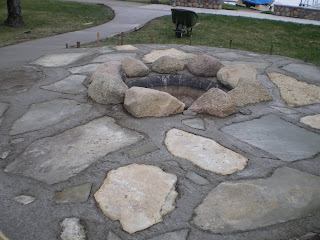 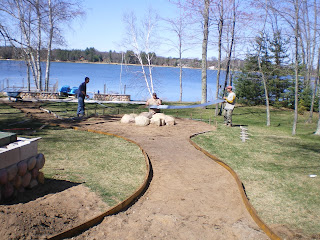 All of the sod that was in the new paved areas was carefully cut out, stacked into wheelbarrows, then relaid by the bocce court. It was quite a puzzle 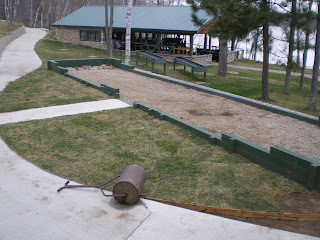 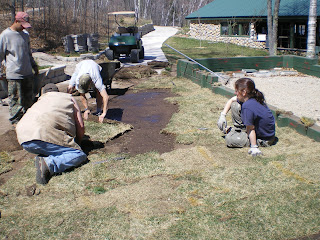 Tim prepped and poured the countertops in the two dorm baths that need to be done before camp starts. In the first picture you see the plywood base, which stays in place. On the front is a 1x3 board that hold the front edge. That piece gets removed after the concrete is
set up. The circles are two inch pieces of foam. These will be cut out to receive the drop in sinks. The countertops will all be dyed to match the floor in each respective room. Not shown in this picture is some pieces of rebar to give the whole thing strength and reduce cracking. For this project, Tim tried a product made specifically for concrete countertops, made by quickrete. 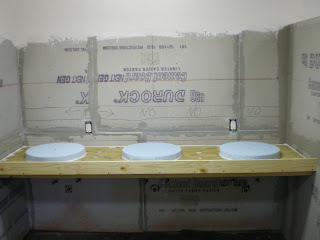 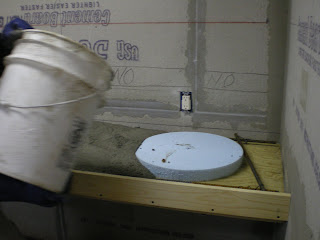 It was a wet and soupy mixture, and it took a long time for the cream that rose to the top to dry. After that, Tim was able to trowel the tops for a nice smooth finish. 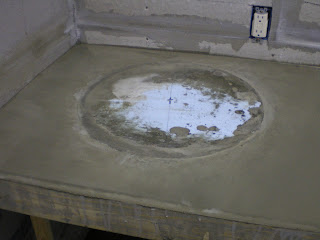 Last Friday, Marceaux and Karol gave the ceiling of bedroom three two coats of paint so that Dave Detloff could come back on Saturday, and work on the tongue and groove. A large percentage of the walls were already done, so we thought it would be good for him to just finish it off. Of course, all of the hard parts were left, so he didn't quite finish.
The second bedroom's walls were sanded by the guys, poly'd by Tim and Karol, and sanded again by the guys.
Marceaux's been putting up the fluorescent fixtures in the baths. Next will be lighting in the mechanical room and the third bedroom.
Also, Tim started to tile the bathroom. I didn't get a picture yet, but I'll be sure to get it on the next blog. He started with the two border tiles that run around the entire room. He can't do more tiling until the countertop gets dyed, and the dying cannot be done until the walls are done. Everything really has to be done in the right order.
Last Tuesday Chrissy and Karol went to the Reinhart Food Show in Green Bay to get new products to add to our camp menu. Of course, many samples were had by both, and they found some yummy new additions for camp!