Tony and the guys put the docks in. The water is so low that the ends of the docks are in about 2 or 3 feet of water. You can see how much sand there is in the pic below. The year we first looked at this property, there was no beach at all. It's never been that high since, although it does vary.
Jobs that are included with putting in the docks are putting out all of the tables and benches on the lakefront areas and hooking up the pump that we use the water the grass by the lake. Well, I'm happy to say that God is a plumber, too. (I suppose He'd be a Master Plumber) The day before, someone had donated a barely used well pump, which Tony Sr. accepted, even though we didn't have an immediate use for it. Tony didn't know anything about this. What he did know was that he spent 3 hours trying to get the pump we used last year going, only to find out that the housing was cracked, rendering the pump useless. When Tony told his dad that we'd have to buy a new pump, he learned that God already knew all of this and had already had the replacement pump donated. 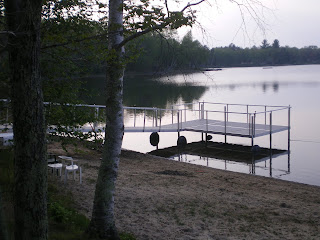 Tony and the guys worked on the rocks for the craft cabin. In the pic below, you can see Tony's new gadget that I mentioned before that is used to tuck point (grout) the rocks. He was very happy with it. It was much easier on the hands, and a bit faster. Also in the pic below, Karol painted the concrete wall green to finish this area off. 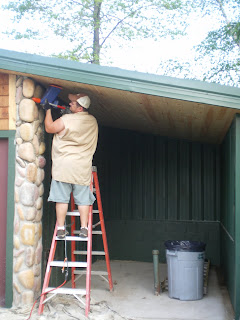 Tim started some of the posts for the stairs and, for lack of a better word, pergola. This north end of the craft cabin will have open trussing over the patio area. It'll be strictly aesthetic, tying in the other porch to this end of the building. Really, it's quite hard to explain, so you'll just have to see it visually, as this job progresses. 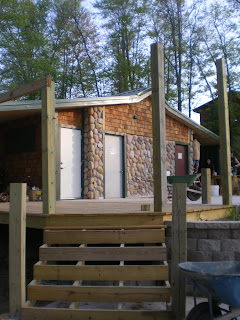 The rock around the doorway helps to emphasis the door as a focal point. 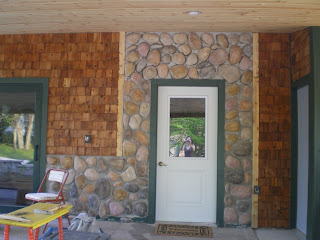 Also finished this week was the roof of this building. Karol painted coats one and two of the green trim. Molly is staining tongue and groove that will finish off the deck. Jen and Marceaux are on their honeymoon in Waupaca.
We all enjoyed their wedding on Saturday. The weather was nice and everyone had a good time. There were many people from camp and Able Church in attendance and as a part of the wedding. DJ, Brian, Richard, Nick were ushers. I don't have any pics now, but I'll get some on here for you later.