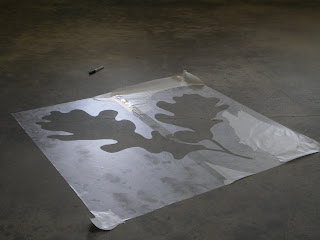 Last Saturday we had a work day, but only Crystal Johnson came to help. So she and Jen worked outside cutting back perennials, and they also repaired a bad spot in the retaining wall by the garage. They also helped Karol with lunch because she was working with Tim in the dorms. They applied a first coat of polyurethane to one wall, and a second to the remaining four. The guys gave the walls a light sanding between coats, so they now have a nice, smooth satin finish. 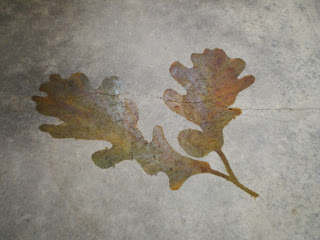 "dye job". Tuesday morning was the weekly Camp Daniel staff meeting. While Tony, Tim Mandich, Jen and Marceaux went into phase two of the meeting, which was planning for The Able Church, Karol and Tim got started on the floor. The cabin they were working on will be "Red Oak Cabin." Each cabin has a distinct color and a logo to identify it. The logo for this in an image of an oak leaf, and the color is red. So Karol projected the image of the oak leaf onto contact paper and cut out the shape with an exacto knife. The negative of the image was placed on the floor, then, using the contact paper as a stencil, she painted the image using green and yellow.
The contact 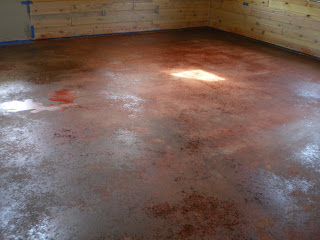 paper was then pulled up, leaving a leaf on the gray concrete. Then she used the positive piece of contact paper to protect the leaf from the red dye that Tim would be applying to the entire floor. The dye is a powder that's mixed with some liquid something or the other, and acetone. Just image a nail polish remover factory. Respirators for everyone in the room! Tim applied it with a pump sprayer. The bath and cabin were done in about 7 minutes. One gallon was the perfect amount. Then he switched to a second reddish color and applied a second coat. As you can see, the effect is quite modeled, which will be forgiving to dirt and dust bunnies. 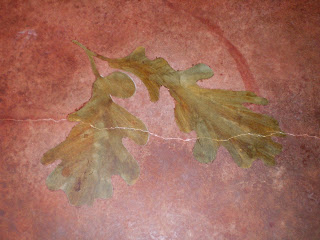 The positive contact paper piece was pulled up. The leaf came out pretty good, but we thought it needed some detail, so on Wednesday, Karol took some oil based black paint, thinned it considerably, and applied an outline to the oak design.

When Tim was about finished with the second coat of dye, Bob Wegman, from Living Hope Church, stopped by, for a first time tour of the grounds. Tim and Chrissy gave him the tour. Chrissy had just finished the newsletter, and the Able meeting was still in progress. 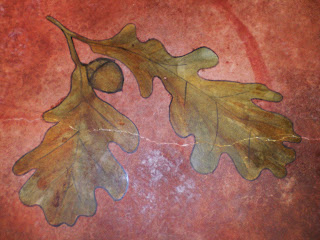 Tim spent Wednesday in Green Bay running errands before going to youth group. Karol continued work on the exterior signs for the Camp Daniel gift shop and did a bunch of little stuff. Tony left for Appleton, where he spoke at a men's bible study group from Fox Valley Christan Fellowship. His brother in law, Jason, is a member of the group, and got Tony the opportunity to speak to the group in an attempt to get counselors and helpers for work days. Today, he put a new sink and toilet in Lora and Jason's downstairs bath, and went to the restore (Habitat for Humanity resale store) in Appleton, and was excited to find toilet stalls that we can use in the dorms. They are red, so they'll have to be either painted another color, or stripped to plain metal. We were just discussing the other day what we were going to do for dividers. New commercial stalls are quite expensive, so we were thinking we would have to do homemade ones. The timing couldn't have been much better!
Today, Karol gave a last coat to the yellow lettering on the exterior store signs, and worked on camp crafts. 120 picture frames needed to be spray painted. And she spray painted a super cool giant football helmet that Tony had found at Goodwill. It'll need a few more coats, but it's on it's way. Tim and the guys applied polyurethane via a sprayer to the 1x4" trim that be used in the dorms and also to the door jams for 4 interior doors. With this technique, the poly dries super fast, and is super fast to apply. Three coats and a sanding in one day! Tony picked up the finish that will go on the concrete floor while he was in Appleton. I'll be sure to show you the end result.
at 4:35 PM