Tony and I have always said that there's so much work done that no one will ever realize. Some of that is just brain time; time spent thinking about the best way to do something, and some of it is physical work that goes unnoticed because, in the end, it just looks "right". The main example of this phenomena is the excavation of the grounds: knocking down hills a few feet, making a level area larger, easing a grade difference, making low areas for run off water to gather in, etc. Well, this past week there's been a lot of this kind of thing going on. Tony and Tim have spent a lot of time in the bulldozer and excavator, respectively. Don't forget to give Marceaux credit for keeping those old beasts running! So it all started with the need to dig the trenches for the lines that will carry the propane to the dorm heaters. (Remember that the propane tanks were installed a couple of weeks ago) That led to the need to decide where poured concrete walkways would be, which, in turn lead to Tony bulldozing to get to a finished grade. Once he started he realized that the second (men's or Trapline Lodge) was a good 2-3' lower than the other dorm. This required a way to grade change without all of the water running in towards the building. So he cut away a bunch of the fill and he and I spend the better part of the day trying to decide how to grade the property. Of course, one thing always leads to another, and what started out with sidewalks turned into where every upcoming building would be. And after all of that, we didn't really make firm decisions on much of what was being contemplated. Kinda overwhelming, really. So in the end, he dozed away a lot of dirt. I wish I could guess at how much, but I cannot. I can tell you that Friday, while Tony was dozing, Tim would get in the excavator, load the dump truck with fill that Tony had piled up, then get out of the excavator, and into the dump truck, which he would drive to the round about and dump. Over and over and over. Saturday, Mike Waldrop came for the work day and ran the dump truck while Tim ran the excavator, so they probably got twice as much moved as Friday. Still, over and over and over. And after all that..... It just looks "right". 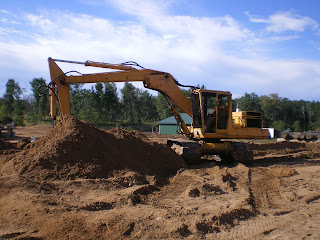 I know that this pic is boring, but here's a shot of a couple of the truck loads of fill that were moved. 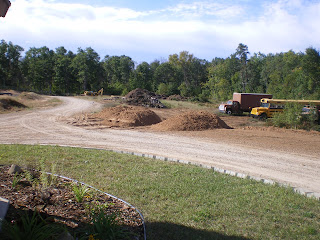 On Saturday, we had a work day for the people of Able Church. About 6 of the girls came to Camp Daniel after Able on Friday and spent the weekend. About a 6 more people came for the day on Saturday. They really got alot done. One of the main jobs (which they finished by noon!) was to dig the trenches for the propane lines. They also started spreading top soil by the dorms, which is a huge job that will probably take the rest of the year. 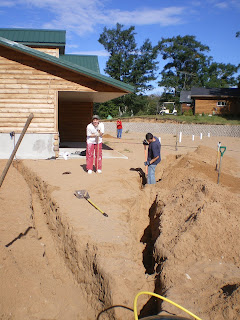 They also finished staining all of the cedar shakes that we have!! If you've ever helped with this job ( I know that many of you have) you can understand the elation that tore thru this group upon completion of the last shake. This was a seemingly never ending job, that's been in progress for about 3 years. (I didn't have the heart to tell them that we'll probably have to buy more to finish the building exteriors) 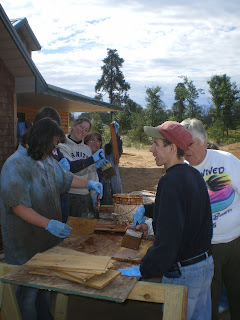 Molly and Jen got started staining the Hartley House deck railing. The rest will be power washed this week and hopefully stained this weekend. 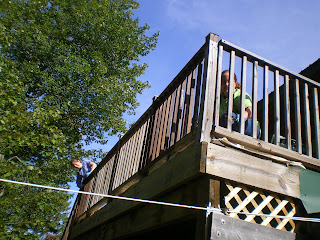 A week or two ago, when Tony was working on the rock and mortar, I showed pictures of the new Camp Daniel sign. Well he worked on it on Saturday, and a few hours on Sunday. He had help from Anthony, Karol and Richard. Below you can see Anthony using the XL belt sander on the 6x6 posts that were used for this project. That sander is a beast, but Anthony had it well under control! 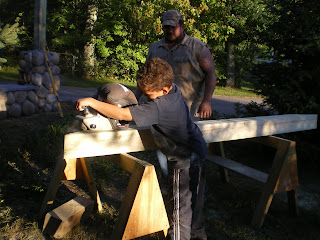 The sign is almost done. A roof will go on still and the mortar between the stones needs to be done. 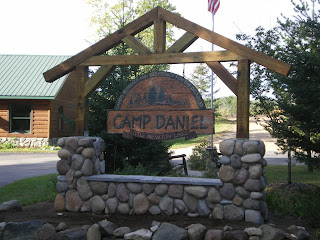 Sunday, we stopped and looked at a used Bobcat on the way home from church. It has the rubber tracks that we need (which are hard to find). Tony googled reviews of the machine and it seems to be a good choice for us, as it doesn't do damage to finished areas (grass, black top, etc). Tony inquired about the machine, and the guy called me today, so I asked a few questions, but I think that they're asking more than we can afford right now. Bummer.
I spent some time last night researching grass seed for the dorm areas. We're looking into planting a fine fescue blend, which is considered a "no mow" grass. It's natural looking without being tall and "weedy". And this type of grass likes sandy soil. Hip Hip Horray, cause we are all about the sand around here. Tony will go to Stein today to see if they carry a fescue blend. If not, we'll probably order it online from a place in Wisconsin. There really are not many "no brainer" decisions. Everything seems to involve either a lot of contemplation or a lot of research.
Today Jen is finshing the staining of the Hartley House deck railing, Molly is working on Able stuff, Tony is at meetings at church, Tim is drywalling the mechanical room of dorm 2 so that the plumbers coming this weekend have plumbing work to do, and well, you know what I've been doing. So I think I'll stop and get some other stuff done while we have nice weather!