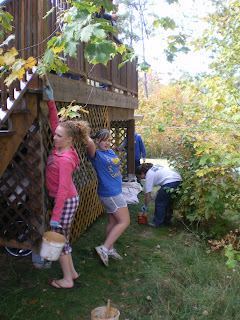 Well alot has happened since our last blog last week, but I think I'll focus on the youth work weekend we just had. The Faith Presbyterian Church (Crivitz) youth group sponsored the work weekend. We also invited all of the younger counselors that we had at Camp this summer. Most of the kids came Friday night and worked thru Sunday at noon. The above picture really captures this group. Getting stuff done, while never losing sight of having fun and being a bit dramatic! There were 15 to 20 workers here, and let me show you how much they got done: 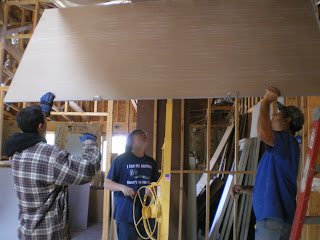 Joe T, Pat Neitzer and Nick hanging drywall in the Trapline Lodge dorm room that will be used as a work room this winter. 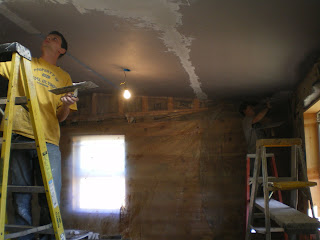 Nick and Brian were able to do some plastering under the mentorship of Luke Kotecki. 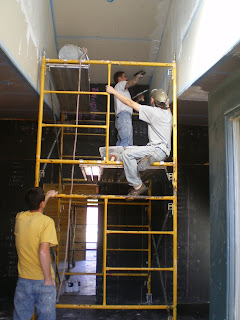 Luke did all of the high plastering after they taped all of the joints and put the metal corner pieces on the outside corners. 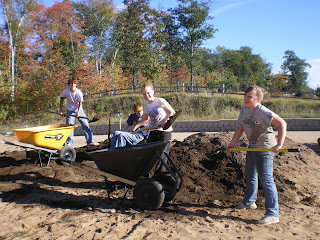 Here the kids are "working" at spreading topsoil around the Trapline Lodge. Looks like they're having too much fun.. 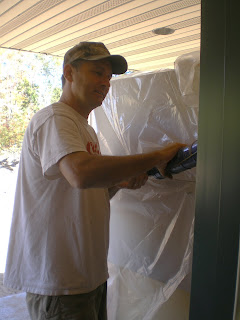 Tim had Pat do some caulking on the Trapline Lodge. 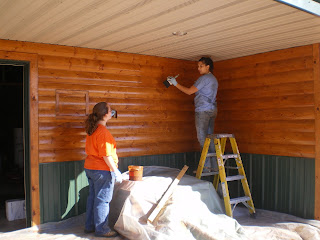 Now we get to the bulk of work that was done. Staining. Here Molly and Emily Neitzer are staining a porch on the Trapline Lodge. They did three of the four, as the fourth one had too much stuff in the way to get to the siding. 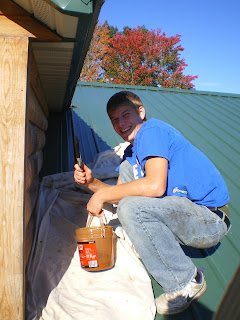 Karol bleached the eight dormers on the Lumberjack Lodge where the siding had turned black from the snow sitting up against the wood. After she was done, Nick Sterry, Johanna Hensler, McKenna Kelly and Emily braved the dangers of being on the roof and stained all eight dormers. 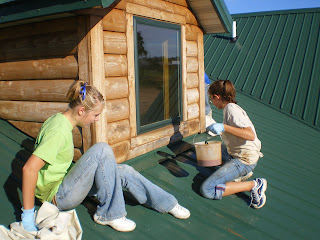 JoJo was a bit nervous, but she did great! 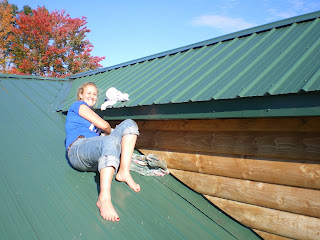 The kids found a great way to have fun. A hose and sand. Really, the possibilities are endless. 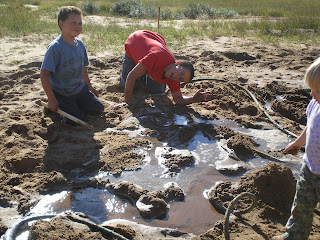 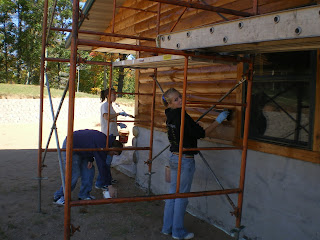 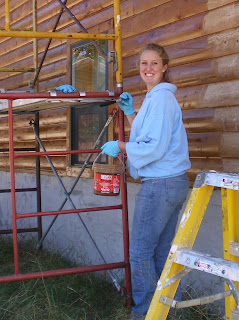 Did I mention that they stained? 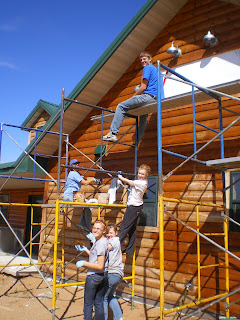 Last Friday, Anthony got to drive the excavator all by himself, for the first time. Tony stood outside the cab and told him what to do. He moved loads of gravel into the dump truck, to be used on the roads. 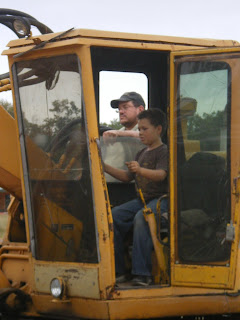 Also here on Saturday were Jerry Reiss, Dewey Sessler and two of his boys. They started the plumbing in the Trapline Lodge. They ran supply lines, and ran lines to where the furnace and water heaters will be. Also, a faucet was installed so that we have water in that dorm now for construction purposes. It was a huge jump start to getting that building done. Tim also had them move an outside faucet on the back of the craft cabin and install the washing machine in the basement of said building. We're always extra appreciative to have skilled labor here on work days. Tim was not about to let either of these guys touch a staining brush!!
So when the dust settled, and the staining brushes were all clean, here's what the teens did in a weekend: stained the entire Lumberjack Lodge, stained the logs on the Trapline lodge, raked out dirt, stained the Hartley House deck, stairs and lattice, filled in the trenches from the buried propane tanks, drywalled one ceiling, got about half done on the plaster work for ceiling of dorm in Lumberjack, caulked some of the Trapline Lodge.