Since blogging last, we've been doing a lot of little stuff. Ya know, cleaning this, mowing that, finishing the details on the other. There was a fun push to get stuff done before the picnic last Saturday, so here's some of that. Tony and Richard did a lot of rock and mortar. This pic shows the bocce ball court with the cultured stone all on, and the cap stones on as well. The caps and the rocks both still need finishing mortar in the joints, but it already looks awesome! 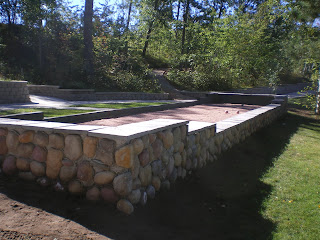 Tim put additional coats of poly on the floors of the two finished dorm rooms. Then he put two coats of wax on them. The wax will protect the finish from scratches. We got bunk beds out of storage, cleaned up and put together in the two finished rooms. Now you get a much better view of how the room will be used. Although these are not the bed we will be using when we have camp here, they will work for now for work days and any other times that people want to stay on the grounds. We bought these beds a couple of years ago from Habitat for Humanity's ReStore in Appleton. We got a great deal on them, and we're appreciative to have them to use for now. 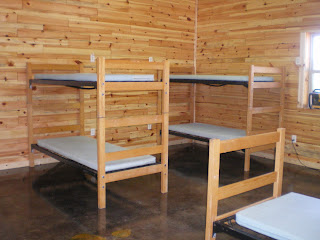 We are in the middle of a sale of the excavator, trailer and dump truck. Which is great news as that gets us quite a bit closer to getting a Bobcat (plus Senior is happy to have less mess to look at around here!!) So before the excavator is gone, Tim is getting everything done with it that we need to do. We have a huge pile of top soil, that's been where the new garage will be going, for a number of years. We've used only a portion of it so far. Tim used the excavator to break it up and move it closer to the road so that it can be spread out by the dorms. Tony was using the bulldozer today to sculpt the land around the dorms so that it's ready for the dirt.
Marceaux has been fixing lots of different things. What a blessing to have a mechanic here. He works on everything, from the golf carts, to mini vans, to heavy equipment. He's also taken on mowing the majority of grass on the property.
Karol worked on a garden adding dirt and transplanting some things. She's also working on polyurethaning in the dorm baths. Jen's been working on Special Olympics stuff. There's really quite a bit involved in running a team. Lots of paper work, etc. Molly's been working on post cards and other correspondence for Able. Chrissy has been working on the email list for work days. We have many addresses wrong. So if you haven't received an email for work days, and would like to, please email Chrissy at kellys@campdaniel.org She's also working on the next Camp Daniel newsletter, and organizing meals for upcoming work days.
Tim and the guys have also been working on the second dorm. They drywalled the ceiling in the bathroom that will be used to store tools. Today Tim got shelving up so that we can stay better organized. The plan is to get all of the work stuff moved over so that the first dorm can be finished by the end of winter.