The First Workday Since Camp

We had our first workday since camp has ended on Saturday! And let me tell you, a LOT of work was done. One job that we did started way back on the Friday of labor day weekend. On that day, a major electrical problem started. We lost all power to the craft cabin and the snack stand. That means the refrigerators and freezers in the snack stand were not working! Grandma Jo, Papa Tony, the guys, Trish, Molly, and Justin were moving quickly trying to move all of the food into other refrigerators and freezers around camp before it all went bad! So, this past Friday, an electrician came up and decided that we needed to dig a three feet deep by 120 feet long trench between Molly/Trish's house and the craft cabin. 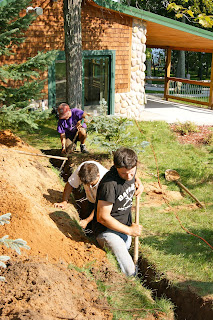 The next day, the electrician came back to lay down the pipe and wires. They finished around 6pm.

Fran Schmitz, from Three Lakes, came and worked with Ron Lange and Richard. They built a wall in the garage that will be a part of the stage area when the garage is converted into a dining hall. 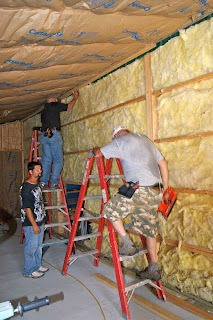 When they were done with that, Fran fixed Tony and Karol's garage door, a light in the office and built a shelf in Papa Tony's office.

Tim Mandich came up and brought Amy Biese with him. Amy watched MJ so Jen could work with Tim and Colon. They laid two pallets of sod up by the dorm. 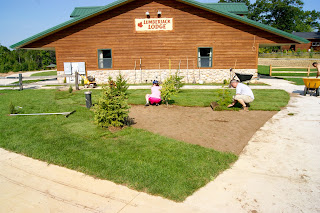 After that was done, Tim helped Karol in the nature center. They cleaned out a lot of stuff and building supplies. Then they swept, vacuumed, and mopped the floors in preparation for dying the concrete.
Karol also worked on email issues with Tim Bazett-Jones for three hours. She worked on the newsletter and decorations in the craft cabin.

After lunch, Colon worked with the guys down by the lakefront. They weeded and raked out the sand. The also cleaned up the water. 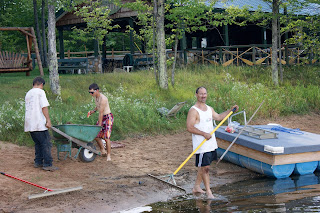 Johanna also came up and worked in her garden. Trish also worked with her. 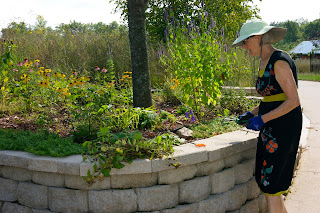 Trish worked hard in the kitchen preparing lunch and dinner for everybody and keeping everyone well hydrated. Before the workday, Trish went along the retaining wall by Papa Tony's house and sprayed a lot of wasps. A lot of them are dead now, but there are still a lot more! They seem to be endless! 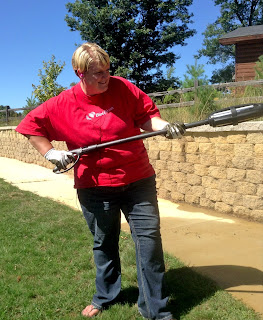