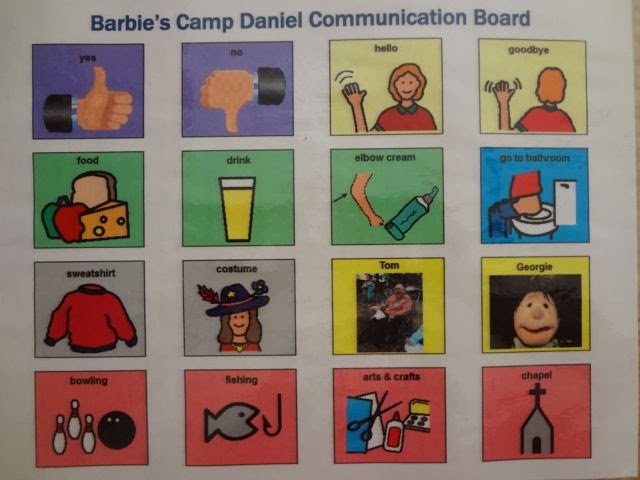 Just in case you didn’t know how awesome Camp Daniel counselors are.....

We received a large envelope in the mail last week from a counselor, Alicia, that came to Camp Daniel via her high school Spanish teacher, Crystal, whom came to us through her dad, Rick, whom attends Tony and Jo’s church in Athelstane.

Alicia had Barbie as a camper last year.  Barbie is a beloved fun loving camper, who also happens to be one of our older campers.  She has cerebral palsy, uses a wheelchair, and struggles to communicate.

A letter in the envelope explained that said counselor, Alicia, is studying speech-language pathology in graduate school and that “Barbie has no way of communicating besides the words “yes” and “no” with a lot of effort.  So, I have made a communication board for Barbie to use while at camp.”  She went on to explain that it generally takes many attempts by professionals to get the right communication board, but that she wanted to try anyways.  Alicia went on saying, “Everyone deserves to be able to communicate and it breaks my heart that Barbie is so limited and has nothing to help her.  I thought that doing something is better than doing nothing...”

Since Alicia spent so much time with Barbie, she was able to customize the board to her specific interests.  The back of the board gives great directions on how to use the board for Barbie’s future counselor.