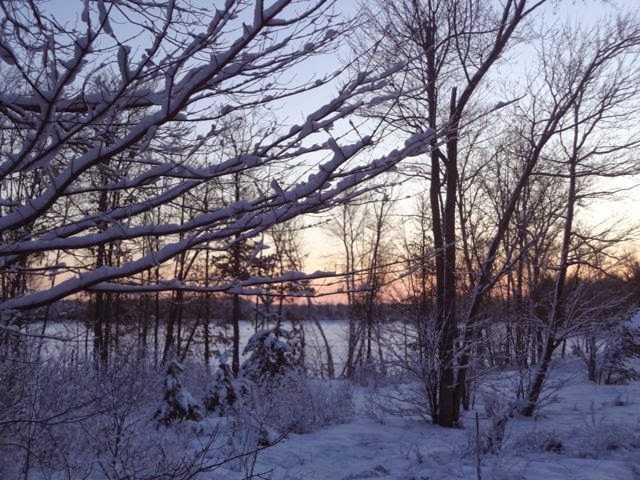 Last weekend, Calvary Memorial Church, of Racine, WI brought 53 volunteers to Camp Daniel for our largest ever, work day.  The week prior was filled with preparations for the tasks to be tackled.  And Friday was spent shoveling the 8” of wet heavy snow that fell throughout the day.  The group traveled from Racine Friday night, and spent the night in Lumberjack Lodge.  As you see in the photo above, Saturday morning broke clear and snowy.  After 2 shifts of breakfast, they were off to the races.  Following is a rundown of many of the jobs that they worked on. 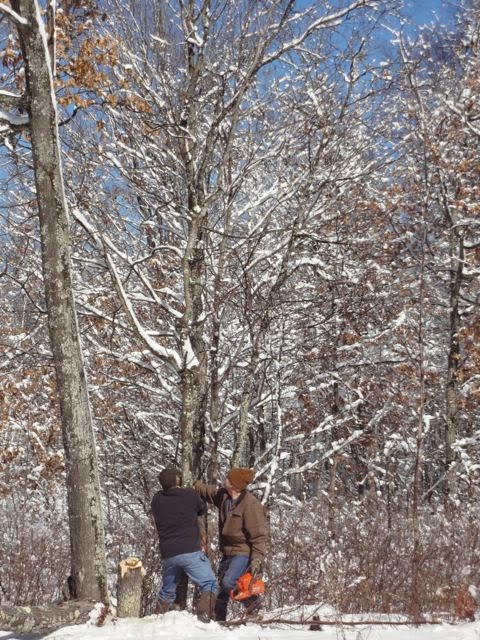 Lynn Sedelbauer was visiting for the weekend, with his daughter Laura.  While Laura helped out in the kitchen, Lynn worked with 2 others to clear the future septic system area of all trees and brush.  As  the guys limbed the felled trees, there were kids and teens on hand to pull the brush into a large burn pile. 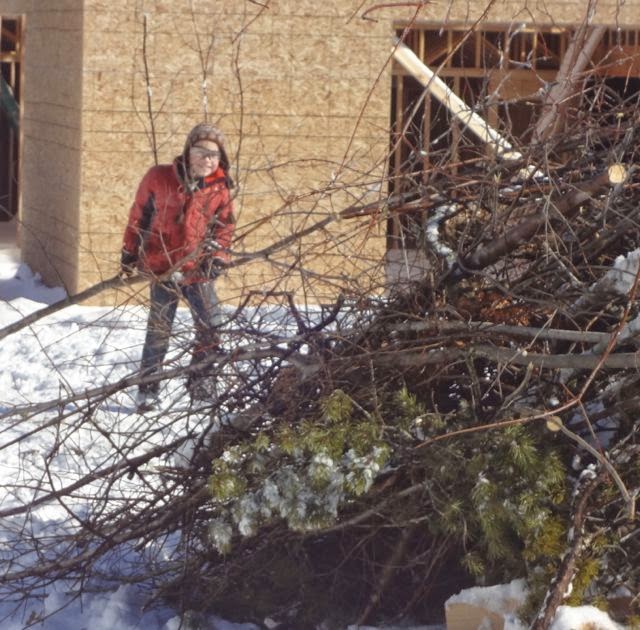 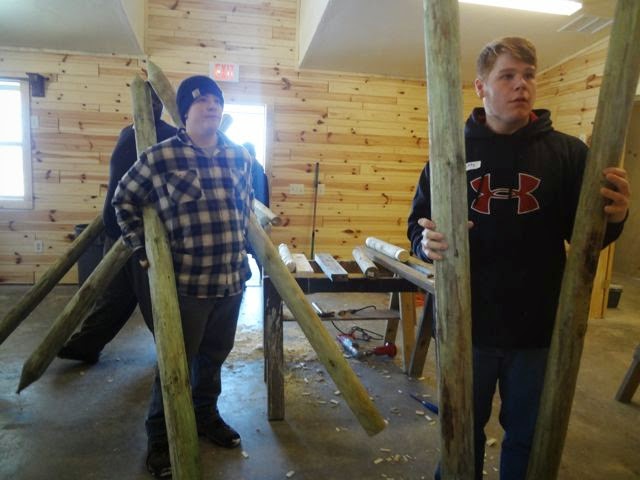 Another group started the job of building the railings for the Trapline Lodge porches. 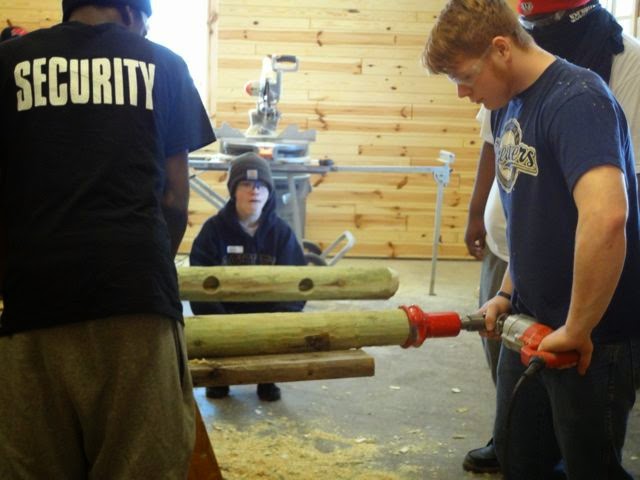 Sewing Central was set up in the Piantine home, as Jen worked with 4 ladies on the curtains for the Trapline lodge.  They ironed, measured, cut, pinned and sewed the day away. 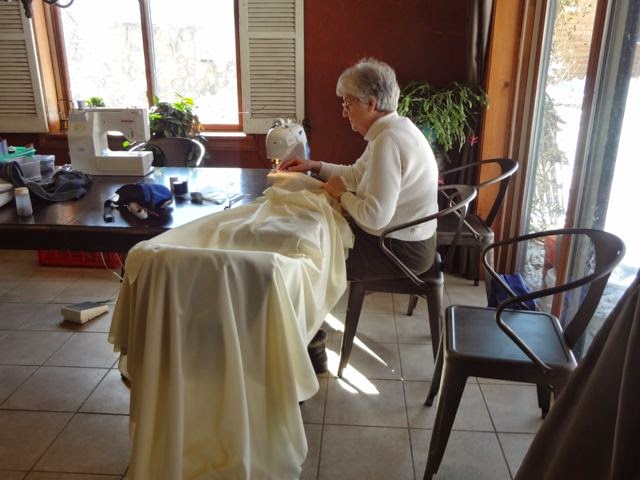 A group of 8 volunteers took on the many tasks the Karol planned in the Factory.  They did a lot of cutting for the crafts that 200 campers will do this summer.  At one point, they had 3 cutting boards going and a number of people with scissors, all doing a great job of the preliminary work of the craft projects. 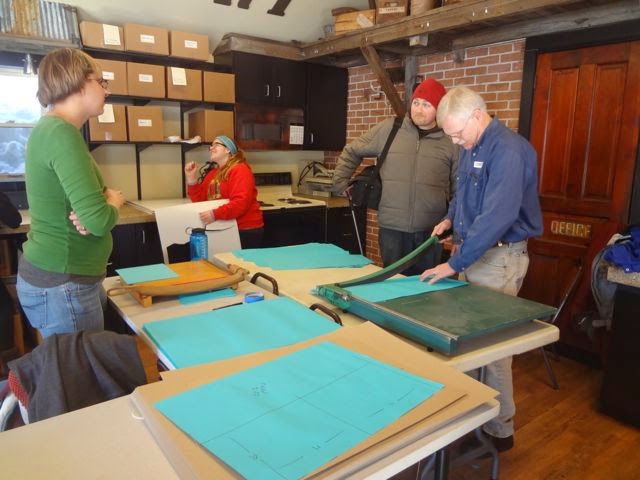 Tim and Marceaux worked in the garage with 2 guys that knew their way around vehicle repairs.  In the photo below, Tim is showing us the snow on the lawnmower deck that he was putting on the John Deere after removing the snowblower.  (He has been warned that if it snows again, he’ll have to drive up to camp with his shovel!!)  The guys also changed oil on some camp vehicles, switched out a water pump, got the salt spreader wiring problem fixed and other things that I don’t really know anything about. 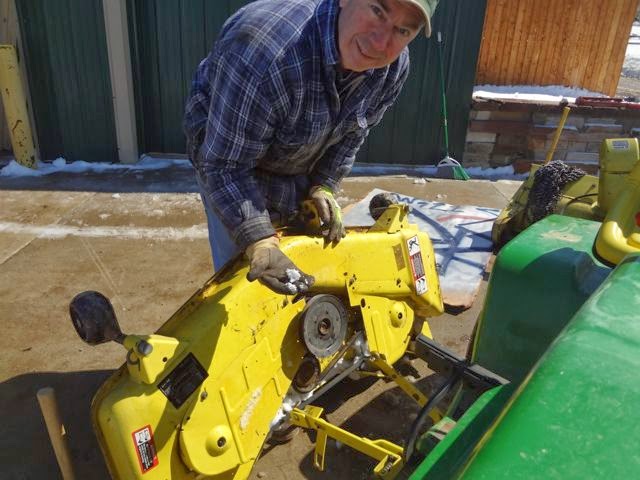 Tony had planned many jobs in the Trapline Lodge, including installing the stall doors in the bathrooms, and some finish trim work too. 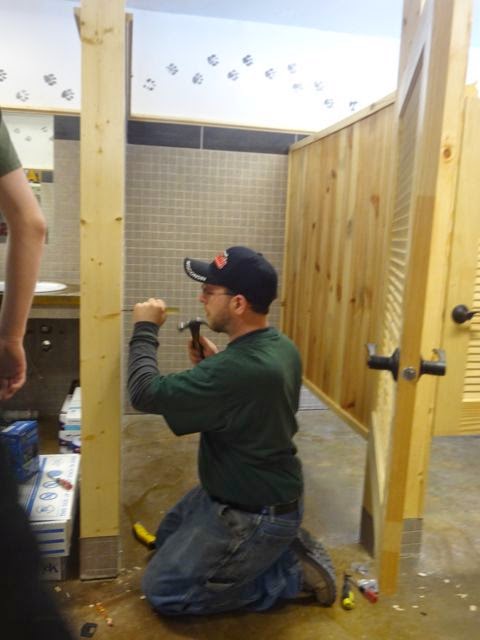 This group cut, sanded and polyurethane boards that will have hooks attached and be mounted in the dorm bathrooms. 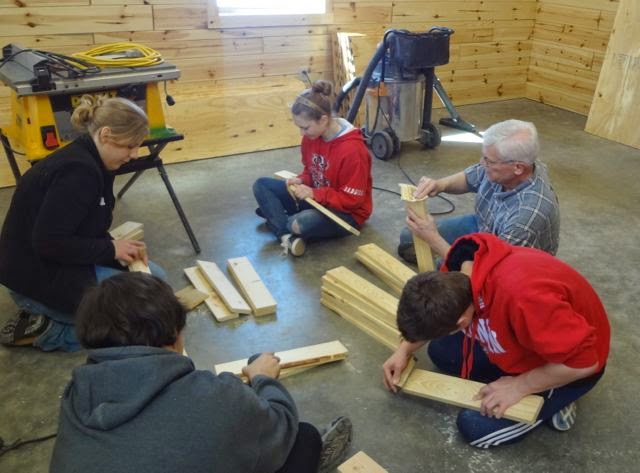 There were 2 groups of plumbers working on Saturday as well.  These guys were installing the sinks and faucets, of which there are 12.  Another plumber attached all the fittings for the drains.  They also got a couple of toilets installed.  It was a good jump on such a large job. 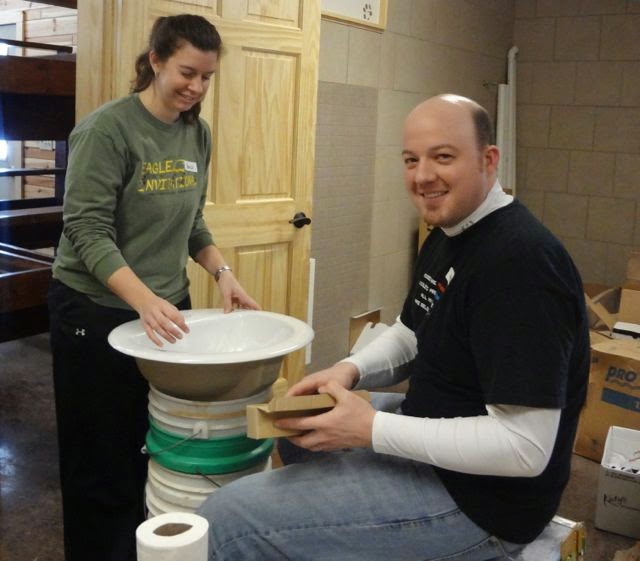 We had some electric work.  These two gentleman installed exit signs, ceiling fans, smoke detectors and digital thermometers.  I believe that completes the electric work in this building. 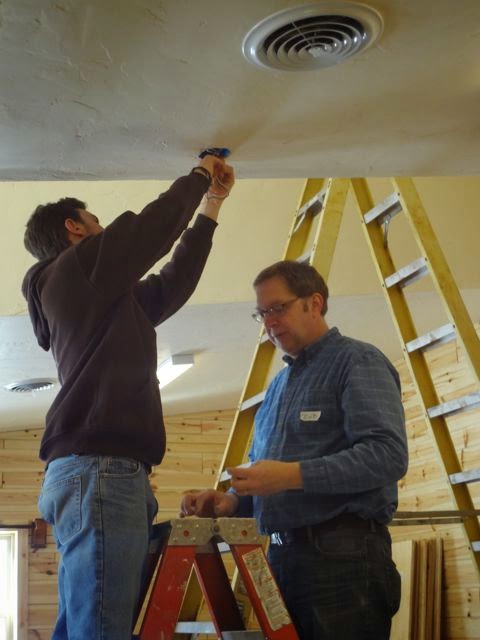 I managed to miss getting a photo of another group that was working on installing tongue and groove on the porch ceiling of the Hartley House.  And we couldn’t have made it through the day without the awesome help of two ladies in the kitchen.

What a blessing Camp Daniel has received in the people of this congregation. This is the second year that they have come for a work day, and the third year that they will bring their junior high group for a missions trip at camp.  There were 63 people signed up for the workday, which is amazing considering that they only have between 200 and 300 in the congregation!  It’s always amazing to step back after such a work day and see how many projects have been completed.  It gives our staff a needed boost!