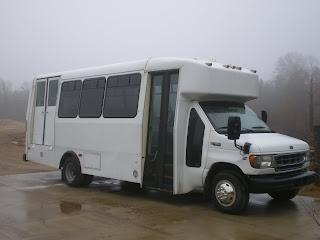 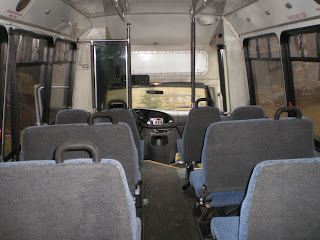 The search is finally over!! Last weekend Karol and Tony went to Chicago to look at two more buses, and were happy to close the deal on one. Tony was very happy with the quality of the bus for the price we paid, he said he would have paid $2,500 more for the same bus! He explained to the seller our needs and what we do do and he was able to knock the price down for us. It's a 15 passenger Ford 450 diesel engine, which we will add a kitchen grease burning kit at some point. The interior is a lot nicer than most of the buses we looked at during the exhaustive 3 week search. It has a wheelchair lift and tie downs for multiple chairs. It gives us the freedom to head to church in Green Bay carrying everyone in one vehicle instead of the three we take now. We'll be taking it on its maiden Camp Daniel run this Saturday, as the Camp Daniel missionaries are all going to Silver Birch Ranch Camp for a day of retreat fun. More on that next week.
Last Saturday, the Able Attack basketball team had a tournament in Menasha. They went one for one, but lost the lottery to advance to the next level tournament. So their basketball season has, unfortunately, ended for this year. They had a final practice and season wrap up on Tuesday.
Tim has finished mudding the dorm. (for a few months anyways) His shoulder is quite glad to be done with that for a while. On to finishing up tongue and groove.
Marceaux and the guys finished taking down the shack by the church in Athelstane. They salvaged the excellently weathered corrugated roof, and most of the crackled paint wood that was the walls. We'll be able to do some cool stuff with the salvage. Actually, we already used some. Last summer, the "rock bath", Tim made the chair rail and mirror frame out of the wood. He'll use more to make a door for the closet in that bath.
Marceaux has also been working on the Dodge wheelchair van, as it will go for sale now that we have the bus.
Today, after finishing the plaster, Tim prepped the third room to be used as a paint room. He then cut out the boards that Karol will use to make signs for the Camp Daniel Christmas gift shop and for the dorms.
This week, Karol and Tony have been busy trying to fill Tony Sr's shoes. Lots of mail, phone messages, bills to pay, application requests to send, camper parents to call back, etc.
Tony has been working on getting ahead of camp preparations as he leaves with Tim and Chrissy for Africa on June 10. He also has been sending out letters asking for partners in prayer and finances for the trip. He has been doing cleaning and maintenance on the sound systems and lights, getting ready to start rehabbing trailer into a new outdoor stage and sound both for camp.
Karol ordered vinyl for the new diecutter machine that we were able to purchase from donations via the newsletter. We'll be able to make professional vinyl logos for the new bus and signage. It's exciting, and a little intimidating. It's a complex computer program that is used with this machine. You just don't think about the amount of time and research that goes into so much stuff around here. Vinyl. Who has the best prices? Which brand? Which colors? Do we need the 50' rolls, or the 10'? Do we spend more on the high performance grade, which costs more? How about the transfer tape? How does that work? How much do we need? Then we had to order window cling vinyl for the signs that go on the glass doors in the office. Such a major production. I'm pooped just thinking of it all. And in the end, it was a good couple of hours work. Which is why sometimes when people say "what do you do all winter?", I'm momentarily speechless.....
at 10:54 AM