Last summer we had a bear donated. He was a 300 pound black bear that had fallen out of a tree, injuring his hip and died from the injuries. We took him to a taxidermist in Three Lakes that's been very good to us in the past. He's been working on the bear when there's extra time, as he's donating his services. We decided to give our bear a visit, and give you an update on his status. 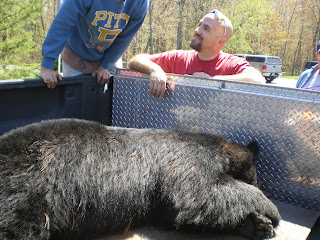 They are working on the mold cast for the fiberglass. He will be standing on his hind legs and reaching up with one arm toward a beehive. The below pic is his hind end and legs. Yes, those are playing cards. Mitch said that the cards are embedded into the clay so that the fiberglass will have seams. 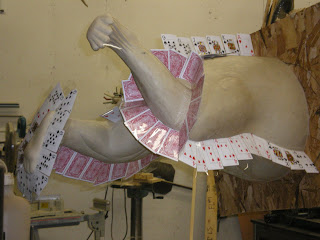 This is his head. It's pretty funny looking without the ears, but the nose is very bearish. 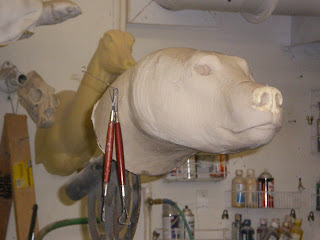 This is his torso and one arm that is reaching up. 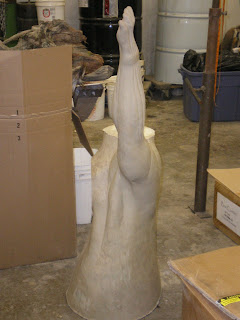 Molly, Tony and Karol went to Three Lakes on Monday to get a used auto part that Marceaux needed to fix a Camp Daniel van. They also went to visit Molly's mom, Robyn, whom works as a cook in the kitchen of Honeyrock Camp. Everyone at Honeyrock was very accommodating, and answered all of their questions quite patiently. Karol and Tony are currently working on the plans for Camp Daniel's future kitchen and dining hall, and the more information on what to do and what not to do, the better. Honeyrock's dining hall seats about the same about as Camp Daniel's will, so it was confirming regarding the planned size of the kitchen and the dining room. Honeyrock also donated over a 1,000 plates, mugs, and bowls, and over 1,400 cups. The van was riding pretty low on the way home. Karol was happy to have such a great storage spot for them in the attic of the dorm.
Tim's still mudding. He probably does it in his sleep. The second bath is done, and the furnace room is done. He and the guys are currently on the third room.
Marceaux and the guys are taking down a very old, small wood building with a corrugated metal roof. It's next to Cornerstone Church in Athelstane. They've taken a number of trips back to Camp Daniel with the good stuff and the non usable wood that will be burned.
John and Sue came back from their trip on Monday, and on Tuesday, Tony and Jo left for three weeks in Florida.