Last Friday, Rick Bub and company came out again and worked on tongue and groove. You can see in the pic below how awesome it looks. We're so glad that we put the dormers in each room, as they let in so much light, and make the rooms feel so much larger than they actually are. Tim, Marceaux, "the mud mixer", and the guys mudded the furnace room. 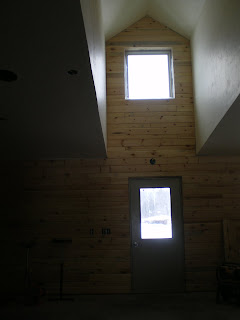 The official workday was last Saturday. Below you see Jen and Crystal (Molly, although not in the pic helped too) mudding the joints of the cement board in the bathroom. Prior to this, they taped all of the seams. A small group came with the Wieds for the work day. They put vapor barrier up in dorm room two and started the tongue and groove. They also prepped dorm room three to receive tape and a first coat of mud on the ceiling, which Tim and co. will start this week. Brian, the electrician from Living Hope Church, finished the rough electric in the second dorm, then finished some wiring on the furnaces in dorm 1. Tim and Co. mudded coat one in bathroom 2. It's very exciting to see the rooms taking shape! 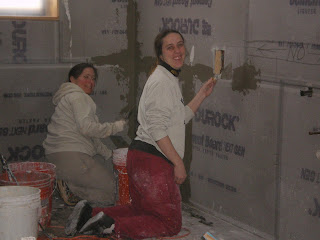 Karol made Annissa's headboard on Friday and Saturday. Annissa was very happy. Good thing it's only a twin because it's pushing 50 pounds! 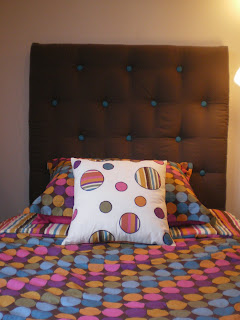 I forgot to mention in the past, Tony and Anthony have been working over the past few weeks on a very special project to be unveiled at camp. I won't show any pics or give too much behind the scenes info, so as to not spoil the magic. But how cool would it be if Georgie could roll around camp in his wheelchair and interact with the campers?...........
...........you'll have to come to camp this summer for the details.
Last week Karol did research on the best way to do the doorknobs in the dorms. I know what you're thinking, but nothing is as simple as you'd think. The issue was how to do the door that goes between two dorm rooms. It needs to lock, but be unlockable from both sides. Thankfully, Schlage makes a double cylinder deadbolt. It has keyhole on both sides. This will be used in conjunction with a closet (non-locking) lever handle. Menards had the lever handles on sale, so Karol took advantage of that and bought the handles for two of the rooms.
Tony's search for a many passenger van continues. I'll keep you posted as things develop. They are currently many irons in the fire.