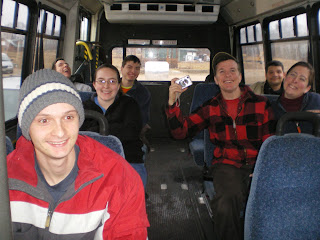 We were on our way for a day of fun at Silver Birch Ranch in White Lake, WI. (about an hour west of us). Below is pictured, Chrissy and Tommy Kelly ready to go out on the trails. 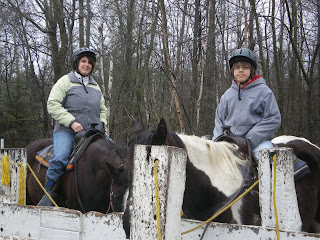 The rock climbing wall was a hit. Here, we see Jen and Marceaux having a race to the top. (Jen won, but I think that Marceaux went easy on her at the end.) 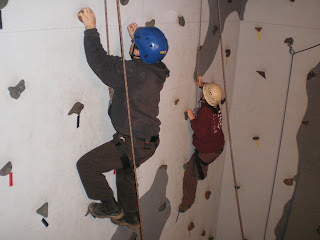 New to Silver Birch is the "Leap of Faith". It's in the climbing tower. You jump off the ledge and try to ring the bell that hangs from the ceiling. You are rigged to the ceiling, but it was still scary. 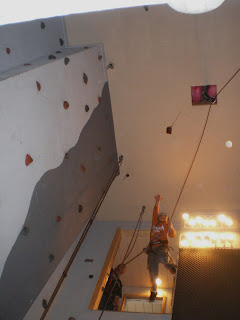 John and the guys have, twice this week, gone to help the Rakowski's (a local family) with the sap buckets on their maples.
Tuesday, Tony and Karol went to Green Bay to take a class that's needed for continuing education, which is required by the state for the adult family home licensing.
Chrissy and Tony have been working on the next newsletter, which is set to be mailed in mid April.
Today, Tony, Karol and Chrissy sat down and had a two hour meeting on the food and kitchen needs for camp this summer. Some fun changes were made to the menu!
Tony's now working at trading our excavator for a skidsteer. He's found someone on Craig's list, who's interested. It's hard to express how much such an acquisition would make Tony and Tim's day!
The guys have been taking advantage of the great weather by raking the grass, sweeping the winter sand off of the walks, and doing some general outdoor cleaning.