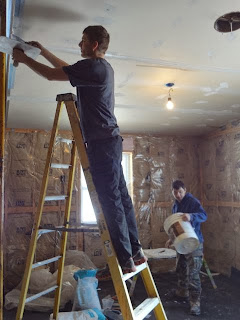 The interns are learning a new skill in plastering.  Tony worked with Nick, Steve, Marceaux and the guys to plaster the ceiling of the dorm.  First they taped the joints, then Marceaux-The-Plaster-Mixer whipped up a batch.  The first coat was only covering the screw heads and joints.

In the pic to the right, you can see that we actually found a job that Nick Sterry needs a ladder for! 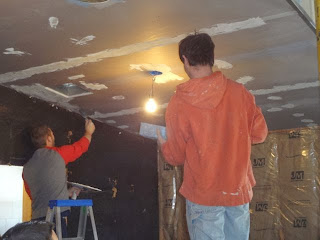 The second day of plaster was putting a full layer of plaster in a skip trowel texture.  Evan was here for  a few days, so he pitched in too.  They got about 75 percent of the ceiling done.  You just don’t realize how much area there is in the dormers.  Probably doubles the square footage of the ceiling.  Today, since Able Special Olympics is cancelled, they will be finishing the plaster. 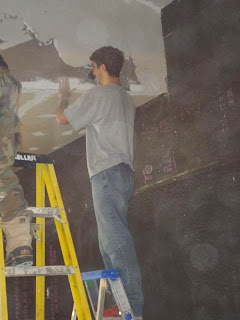 Frontier Builders is a building and consulting company based in Kaukauna that is helping Camp Daniel out in the building of the new garage/multi-purpose building.  They are great guys that really get who we are and what we are trying to do in the larger picture and with this building in particular.  Part of the help that they are giving us includes spreading the word about Camp Daniel and our building needs for this project to people they know and customers that come into their place of business.   As a result, they asked us for a general poster that they can put up in their lobby that will start some conversations and hopefully lead to additional donations and support.  We don’t currently have anything like that, so Karol put to the task of making something that’s general enough to appeal to many people, simple enough to get the idea across quickly, and gives as complete a picture of what Camp Daniel is.

I thought it may be interesting to share a little about the process involved.  I had the idea before I set to the computer to have a border that what graphic at first glance, but that gave a picture of the many fun aspects of camp.  Because how do you express camp with one photo?  So I started going through all of the camp photos on Molly’s Flickr account.  I was looking for photos that showed different parts of camp, but they had to be able to be cropped into a square shape, and be simple enough to be effective in a small size and represent the variety of campers and counselors that we have.  Well, it took me about 3 hours to go through camp pics back to 2010, after which, I had enough of the right kind of photos.  I downloaded each photo, imported it into my graphics program and cropped to the size and composition that worked best.  Tony helped me pic out the main photo, which he has used for other CD things.  I edited the photo to take out the leg of the person holding the horse.  Then it was time for the copy.  I started with wording from other CD brochures.  At the time of the first draft, which is the picture below, I am about 5 hours into the process. 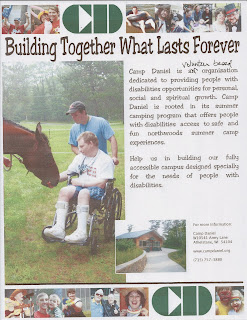 One of the hard things about designing this was that it will be printed to a size that’s probably double that which I can print on my printer.  Because of this I was able to tell right away that the little pictures were too large.  I also felt like the color was too distracting, so I shrank them all down and turned each one to black and white and then relined them up.  Better.  Many changes past that, is the next photo.  The headline was moved to the middle, which visually broke up the verbiage.  The main photo was reduced. And a bold Camp Daniel was added at the area at the bottom.  Much better, but still not quite right. 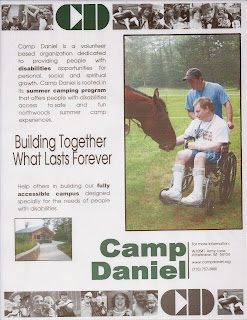 Several changes later, and we have the final.  I changed all the fonts, reduced the main picture again to give the whole poster more negative, or background space.  The total time spent on this was somewhere between 8 and 10 hours.  We are happy with the results and hope to be able to use this as  a sort of template for future posters, where we can change out small parts to give a different emphasis. 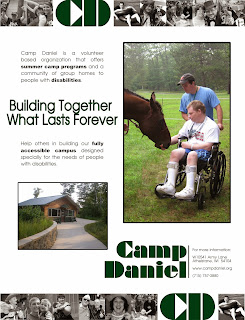 Last Saturday night, we had the January Counselor meeting at the Hartley House.  There were 20 people on hand for pizza and a meeting that included the unveiling of this year’s camp theme.  Curious about what it is???  Guess you should have been here!  :)

We actually talked quite a bit about dreams and how God can fulfill them. Annissa, Steve, Becky, Ruth and Tim (above)   (below)  Trish and Kitt. 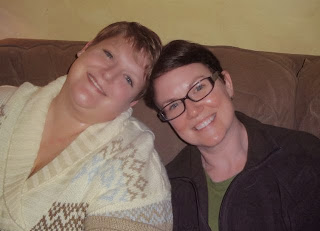