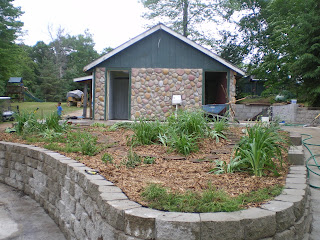 Today Chrissy and Karol worked on the large garden next to the Craft Cabin. The oak stepping stones were laid on weed block in a path that was dug about 2 in going through the garden. Then they plants the oodles of perennials. Varieties include: day lily, iris, rose campion, ajuga, sedum, blanket flower, tansy, sweet william, spiderwort, black eyed susan, creeping phlox, and a few mystery plants. 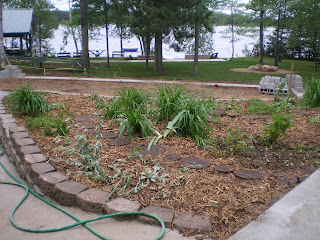 Little Tony and Richard did more landscaping. There were areas where the grass just hasn't been growing, so they completely redid the dirt and put down seed. They also finished grading other areas by the lake and around the Craft Cabin. To the south of the cabin, the top soil got its final grading and seed was planted. I think that they're all "raked out" and are ready to move on to other projects. All of the hard work was definitely worth it, as the grounds have never looked so good. And we have to look forward to, the seed sprouting into grass, and hugely improved rain runoff control.
An unexpected issue occupied Little Tony for a better part of the day. The basement of the Craft Cabin kept flooding (started over the weekend). He and Tim found out that a root grew into the septic at a point. So the 3 inches of water was pumped out (again) and we're waiting for the septic guy to come fix the problem.
Tim, with helpers, Big Anthony, Nick and Brian worked in the craft cabin putting up trim and extending the jambs. Of course, Tim had youth group in the evening. We appreciate his faithfulness to it!