Monday thru Thursday Tim, the guys and the septic crew worked to install the septic tanks and fields for both dorms. They are now done. In the pic below you can see the black plastic pieces that make up the field. There's a white pipe at either end of every one of them. It'll take a lot of flushing to fill these babies up! 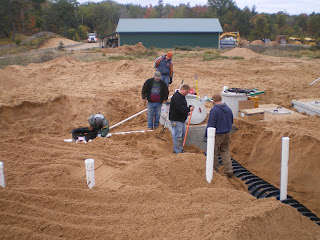 I'm going to attempt to explain today. It's confusing, but such a prime example of the way things so often go around here. Today was a planned work day at Living Hope Church to work on the Wednesday kids program. The town has now been officially named Megarusulem. At 8:30 the caravan left from Camp Daniel for Green Bay. Karol, Molly and DJ were in Karol's van pulling trailer #3. Tony drove Tim's truck with trailer #2, and Tim, Marceaux and the rest of the guys were in the Camp Daniel pickup and trailer #1. The guys went straight to Church and Karol went to Home Acres to get a sheet of drywall and some universal colorant for the plaster work that will be on the building facades. They don't carry colorant. Then they made their way to church. Karol ran to Home Depot to get roller covers (and some other supplies) so that Molly could roll on the plaster primer onto the existing walls. The guys were drywalling. Karol then left again on the hunt for the universal colorant. 4 stores and an hour and a half later she made it back with colorant and McDonalds for lunch. Then the caravan of three trailers headed to Green Bay Nursery. They were giving a large donation of shrubs, trees and cobbled pavers. After restacking and wrapping the pavers onto pallets, 3 of the pallets of pavers fit in trailer #1, the shrubs and medium trees went into trailer 3, and the HUGE trees onto trailer 2. While the trees were being tied down, the pavers trailer went back to church and were hurriedly unloaded, then back to the nursery for the second load of three pallets. All three trailers went back to church and everyone helped stack the pavers next to the wall of the church. (The pavers will be used for the floor in Megarusulem) Then everyone was back inside to continue drywalling, except for Tony and Tim, who took trailer 1 back again to the nursery for more trees. When they got back, it was about 5 o'clock and we figured that we should start the trees on their way north so that one of the trailers could be unloaded for a final trip to the nursery for the remaining trees. The guys were staying with Jen and Molly and DJ for Able Fellowship. Just as we were leaving, we got a call from Sue, whom was on her way to Green Bay to pick up Crystal and attend Able. She had just got off the phone with John whom was home with the flu. She had to turn around and bring John to the VA hospital in Iron Mountain. That changed things because now Crystal needed a ride to church and they had too many people for Jen's car. So at the last minute, Richard, Nick and Brian came home with Karol and Tony. So that everyone had a ride home. En route, Karol changed the plans to pick up the kids in Crivitz. Just south of Crivitz, Tim's truck started smoking so badly that it created a white out condition. Thankfully we all were able to pull onto the shoulder without any accidents. The smoke originated in the engine compartment. It spilled all the oil out and could no longer run. So Tony brought trailer #2 to the Kelly's house, then came back to pull Tim's truck and trailer #1 to the Kelly's house. Then he brought one of the trailers back to Camp Daniel so that the plants could be planted tomorrow at the work day.
at 5:22 PM