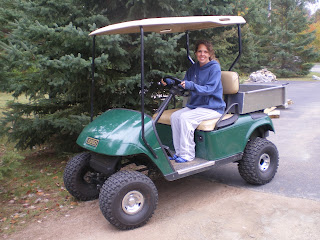 Last Friday Karol was surprised at the "surprise birthday" that Tony and the kids treated her to, including cards and a special birthday dinner. (This really was a surprise because her birthday is in December!) After dinner, she was led outside to the real reason behind all of the surprise fun: a golf cart. Karol wants to thank all of the many many people involved in making this happen. Annissa and McKenna solicited donations from counselors and workers on the last day of each camp, plus some others donated as well. 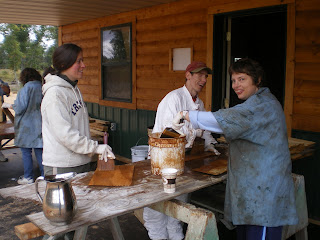 We had a very successful work day on Saturday. The rain held off and much was accomplished. Above is a picture of some of the volunteers staining the cedar shakes. Jen, DJ and Darlene Jach are in the foreground, and behind them, Sarah Braun and Amanda Schuesler are also busy staining. The picture below shows the immense amount of work that Tom VanDalen did on the deck in front of the Craft Cabin. 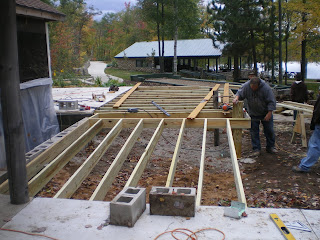 Below, the volunteers pose in front of the garden by the Camp Daniel entry sign. Sally Kelly and Bonnie Blakley, from Living Hope Church, Amanda, Sarah, Crystal and Darlene from Able church joined forces with Karol, Jen and Molly to tackle this monster job. They dug up all of the plants and replanted some back into the garden, and others into other areas on the grounds. The supports for the sign were were rotten at the bottom so while the garden was cleared of plants, they were knocked down. Then Tony made plans-on-the-fly for the new support for the Camp Daniel sign. He then dug the footing for a poured concrete foundation that will be done with the next concrete pour later this fall. 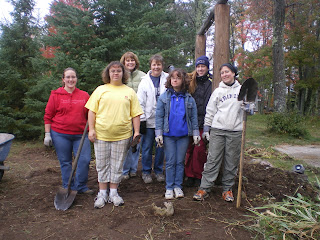 Brian Renard, David Dettloff, and George Caylor all drove up from Green Bay to help with the work day. Bill Peterson, from Lake Helen, joined them as they worked in the dorms putting plastic on the ceilings and installing the drywall too.