Thursday brought a new addition to the Camp Daniel family. After many months of the kids' begging, the Kelly's adopted a puppy from the Humane Society. His name is Patch and he's a 4 month old mystery breed. 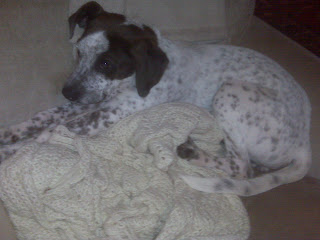 Last week, Tony and the guys brought all of the docks in. As you can see in the pic below, the decking comes off in sections, then the framework is rolled out of the water and onto the shore. Obviously I didn't help, because of how simply I just described the process! 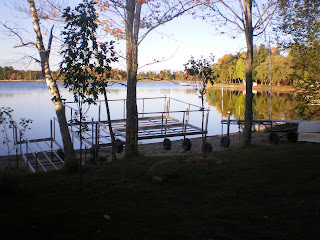 I don't have any pictures yet, but Tony, the guys, Tim and Karol started on a major project at Living Hope Church. The church is converting a little used room into a live bible town for the Wednesday night kids program. It's called Mega Creative Labs, and as the name hints, it will relate to the Sunday Mega program that many of us are involved in. Tony and the guys worked on Thursday. They were helped on Friday by Tim and Karol. When the day was done, all of the building facades were framed. I'll go into more detail later, when I have more pictures. I'll just say that it's going to be quite a transformation.
Below is a picture of the Mega Kids Car Show that was held at Living Hope Church last Saturday. We were happy with the turn out considering the weather was very cold and it was our first year of doing it. There were a few classic cars, some newer souped up cars, a fire truck, police suv, a cement truck with conveyor, motorcycles, just to name a few. The kids did enjoy the fun novelty vehicles and being able to get in some and honk the horn. 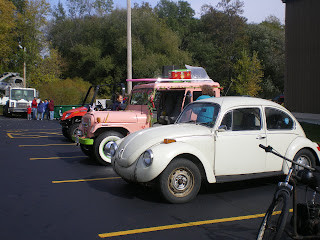 For those out of state, this is for you- It snowed all day yesterday and finally started to stick overnight, to this sight this morning. Most people were mortified at this view in mid-October, but it really was quite beautiful. The snow was stuck on every branch and leaf. Of course, the snow was gone by 10 am, which is ok too. 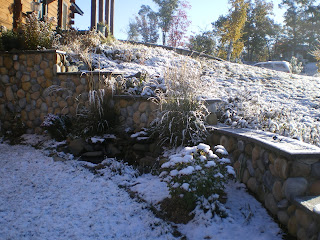 On Monday and Tuesday of this week, the septic system was started for the dorms. Monday was and excavation day, and Tuesday got the tanks in the ground. You can't really tell from the below pic, but these are HUGE. What you see is for one dorm. Tomorrow they install the field.
While the workers were working on the septic, Tim had to stay nearby for questions or needed help, so he planed the large logs that will be the posts for each of the 8 porches of the dorms. 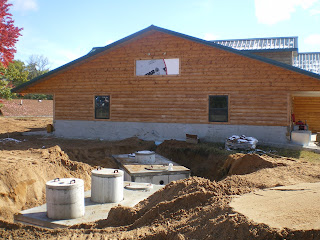 John and Sue have been in Minneapolis. Jen's been doing fill in work for another therapist. Marceaux is still working part time at Northern Automotive. I almost forgot, the Able Attack Special Olympics bowling team played on Sunday. We're proud to say that Nick and Richard, Blake Stonelake are all advancing to the next round, which is regionals, next Sunday.