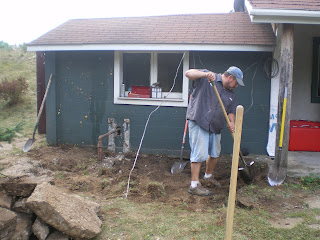 On Friday, work started on the pump house (a concrete block 7x10 foot area attached to the house, holding the water pump). Molly and Karol cleaned out the attic so that later, insulation can be blown into it. Then they were joined by Tim and Little Tony to begin work on the exterior. All of the plants in front were pulled up and replanted elsewhere on the grounds. Then the old sidewalk was taken out and the area formed up for concrete. There will be a doorway where the window is and an entry of sorts will be extended onto the front of the building. The point is that the pipes that are now on the exterior of the building ( you can see them in the pic) will be on the interior, and, therefore, won't freeze. Late Friday afternoon, the guys mixed up concrete with the concrete mixer and poured the slab.