Wednesday morning involved getting the finishing touches ready to receive a truck of concrete. When the truck rolled in at 10:00 am, Little Tony, Tim, the guys and Karol were ready. In the pic below, you can just see the short sidewalk that connects the bocce court to the path. There were also two small footings poured on either end of the bocce court. In the foreground, you can see the extension to the main walking path. 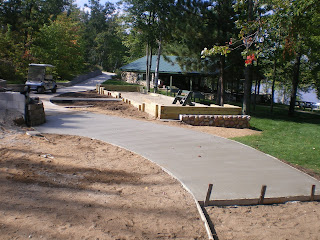 This picture was taken later on in th day. As you can see, the concrete was extended in front of the craft cabin (don't forget, the porch is coming off and being rebuilt to the size of the concrete). Also in this pic you can see Little Tony and the guys working extending the retaining block in a graceful curve. They have also back filled behind the block wall. All of the water will shed off of this area beautifully, which is always one of the main concerns when we re sculpt the land. 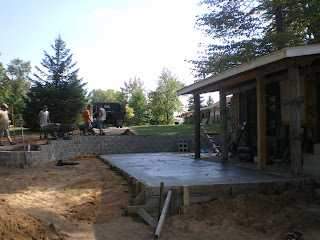 This view shows the worked on areas in relation to the lake. This was taken from behind that new retaining wall. Where the camera is shooting from in this pic, is now as far as one can drive a vehicle. No more backing up to the snack stand for loading/unloading! The main walking path is 8 feet wide, so a vehicle can technically drive on it, but that's only for special circumstances. All I know is that we really need a 4' wide snow blower to tackle all of the impending snow. 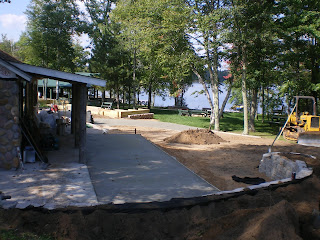 Today, Chrissy, Jen and Molly did a bunch of weeding in the gardens to get ready for the appreciation picnic this Saturday. In the late afternoon, Karol went to Green Bay to do all of the grocery shopping for the picnic, and for the Hartley House. Tim and Chrissy had youth group at Living Hope Church. Jen and Molly had a meeting in the evening for Special Olympics.