Today, Jen and Molly, with the help of Sarah Braun painted the first coat on the bocce court. Why is it red? and why they miss a bunch? The court will match the posts of the bait shop (snack stand) where the finished look is a distressed green with the read peaking thru in small areas. The reason why it's not solid red is because there wasn't enough paint to cover the entire thing, so the distressing will be limited to areas of red, the rest being a solid green. 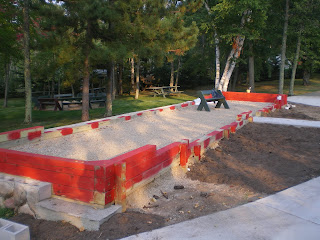 More concrete. Yea! This pic was taken pre-exhaustion. The crew started building the forms (including laying concrete block) in the morning and were doing finishing touches until the truck pulled in at 3:30 (we were thankful that he was a half hour late) 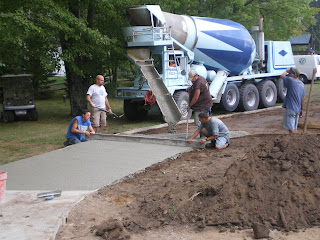 The concrete crew drafted a new member. Molly. She was in charge of washing all of the tools off as we went along.
9 yards later. There's now a wide sidewalk from the craft cabin porch slab to the greatly extended main walking path. 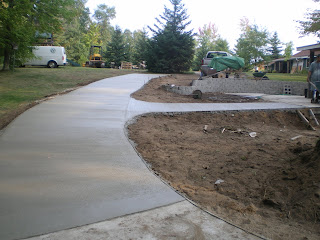